Volvo Group will drive three trucks in a platoon from Gothenburg to Rotterdam as part of the challenge which aims to highlight the fuel economy benefits of platooning. 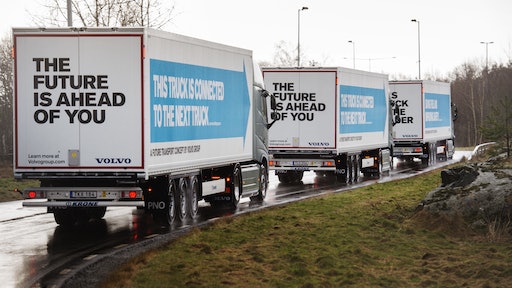 Volvo Group is participation in the European Truck Platooning Challenge. On the initiative of the Dutch Presidency of the EU, three Volvo trucks communicating wirelessly and driving closely behind one another, in a method known as platooning, will travel through Europe to Rotterdam. The aim is to move a step closer to the introduction of platooning in Europe.

When trucks can drive closely behind one another, fuel economy is improved as a result of the reduction in drag. Drag accounts for up to 25% of a truck’s total fuel consumption, and the closer the trucks drive to each other, the greater the fuel-saving potential. Using wireless technology, the trucks can drive with only about a one-second gap between the vehicles in a platoon. By communicating with each other, the trucks automatically match each other’s speed and braking.

“Essentially, this means that the reaction time for breaking is reduced to zero, which in turn improves safety and minimizes the ‘accordion effect’ in connection with traffic congestion,” says Anders Kellström, Project Manager for Volvo’s participation in the EU Truck Platooning Challenge.
It is currently not possible to utilize the advantages of platooning on Europe’s roads, since legislation in the various countries governing the safe driving distance between trucks differs. The Netherlands has initiated the European Truck Platooning Challenge in an effort to discuss and highlight the changes required in European transportation legislation that would facilitate the introduction of platooning. All truck manufacturers in Europe have been invited to drive truck convoys from their respective countries to a final event in Rotterdam in April.

The Volvo Group will participate by driving three trucks in a platoon from Gothenburg to Rotterdam in the Netherlands via Denmark, Germany and Belgium. Volvo, in cooperation with the Swedish Transport Administration and the City of Gothenburg, will arrange a seminar in Gothenburg in conjunction with the start of the journey to address the potential to enhance the efficiency of transportation through platooning and autonomous driving. A similar seminar will be arranged by Volvo Trucks in Brussels on April 5, 2016.

“We believe that platooning offers major advantages, mainly for our customers, but also for society in the form of fuel savings, reduced emissions and enhanced transportation efficiency. Together with the rest of society, the transportation industry needs to tackle such challenges as the harmonization of legislation, and in so doing promote the introduction of platooning in Europe,” says Kellström.