ULEMCo has completed a hydrogen diesel dual fuel conversion of a waste disposal truck for a UK commercial waste company. 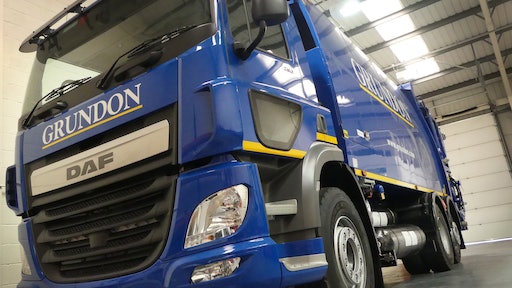 ULEMCo, the company leading the use of ultra-low emission hydrogen-fuelled commercial vehicles in the UK, has just completed the first hydrogen fuel conversion for a UK commercial waste company. Oxfordshire-based Grundon Waste Management selected ULEMCo to carry out the hydrogen diesel dual-fuel conversion for one of its waste disposal trucks.

ULEMCo has previously retro-fitted a number of lorries and vans in the public sector, but this is the first private sector contract. The project also represents the first such conversion of a DAF vehicle, and signals the way towards use of hydrogen as a practical alternative to reduce emissions in a wide range of vehicle makes.

Read more about the use of hydrogen as a fuel in the article "Hydrogen Proves its Potential in Heavy-Duty Applications."

This project featured a new modular approach to conversion by ULEMCo. It deployed a 10 kg hydrogen unit on the side of the lorry, and this approach will enable the company to reduce the costs of converting other vehicle types.

Grundon is an ideal customer for this technology as the company has a strategic commitment to carbon neutrality, and a practical exploration of the benefits that hydrogen - particularly when produced from waste processes - will give them within the circular economy.

Earlier this year, Grundon committed to reducing all greenhouse gas emissions from its vehicles to net zero by extending its highly successful CarbonNeutral fleet certification program for a fourth consecutive year. The certification means that every mile traveled by Grundon lorries and cars is officially carbon neutral. This helps customers reduce their own carbon footprint, and is further enhanced through the adoption of the hydrogen diesel dual-fuel conversion.

“This DAF conversion represents several ‘firsts’ for hydrogen fuel, and moves ULEMCo onto the next stage of being able to convert large numbers of different vehicle types cost effectively,” says Amanda Lyne, CEO of ULEMCo.

“We are highly impressed by the potential of hydrogen dual-fuel to reduce our carbon footprint as well as reducing costs in the future,” says Grundon’s Group Logistics Manager, John Stephens. “The synergy of combining the use of hydrogen-fueled vehicles with the potential production of hydrogen from waste treatment processes makes it especially compelling.”

ULEMCo will be exhibiting at Low Carbon Vehicle Event 2017 at Millbrook in Bedfordshire.