CEMA reports the European tractor market grew 12.8% in 2017, due in part to a peak in registrations in December. 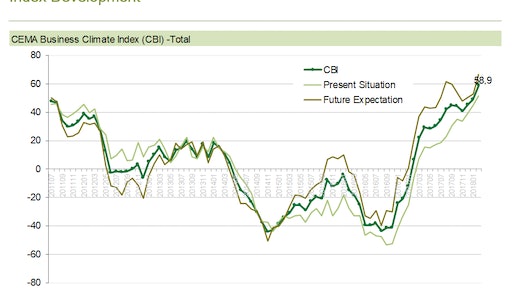 In total, 161.235 agricultural tractors were registered in 30 European countries1 in 2017. This means that the European tractor market grew 12.8% in comparison with 2016, representing a further increase from an already high level.

The main reason for this December peak is new technical requirements for tractors that became mandatory on all new tractors on January 1, 2018. These technical requirements resulted in mandatory changes on various aspects such as braking and lighting. Tractors not meeting those requirements needed to be registered or placed on the market before that date. Therefore, many tractors were registered by the end of 2017 and it can be expected that registrations will be negatively impacted the first months of 2018 as a consequence.

Comparing the registrations in different power bands shows that sales increased for most power ranges. Only for tractors between 100 and 150 hp total registrations decreased slightly. The number of registrations for the largest tractors above 300 hp remained stable.

Most markets experienced growth in 2017

Almost all tractor markets in countries of CEMA members experienced significant growth rates in 2017, varying between 5.7% in Spain and 22.9% in Denmark. The French market was the only exception with a decrease of 2.2% in tractor registrations. Without taking into account the peak in December, figures were still mostly positive. Until the third quarter, all CEMA markets - except the French, German and Austrian market - grew in comparison with the year before.

The French market experienced a sharp decline in the first semester of 2017. However, this was followed by strong growth in the second semester resulting in a total increase of the agricultural machinery market turnover of 2.1%.

In Italy the agricultural machinery market experienced in 2017 a substantial increases in demand for many type of products. Sales were partly encouraged by EU and national funding.

Demand on the UK market in 2017 was higher for most agricultural product groups. Only sprayers and grain drills experienced declines. Consequently, there was an overall growth of the UK agricultural machinery market.

The total Dutch market for agricultural machinery was also bigger in 2017 than in 2016.

In Belgium the general agricultural machinery market declined in 2017. From the main machine types, demand for balers and combine harvesters declined, while demand for sprayers, forage harvesters and mowers was relatively stable.

Positive signals for the agricultural machinery market in 2018

In 2018, the market may grow further, an expectation based on the CEMA Barometer and the economic experts of the CEMA member associations. Economic experts from France, Germany, Belgium, Italy and the UK all expect a small growth of the agricultural machinery market for 2018 in their country.

As a monthly survey sent to the European agricultural machinery industry and covering all major product categories, the CEMA Barometer provides a regular overview of the business mood based on current business sentiment and the expected turnover in the next 6 months. Below you can find the latest CEMA Barometer.