FTR reports December trailer orders declined from November, but are expected to remain strong again in 2016. 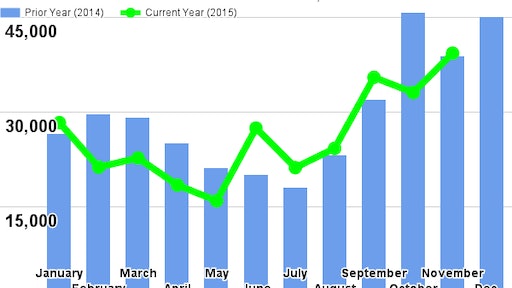 FTR reports U.S. Trailer net orders for December were 25,500 with full year 2015 totaling 313,000 units. December trailer orders, even with -35% month-over-month (m/m) and -43% year-over-year (y/y) comparisons, met expectations that orders would fall back into a more reasonable range after the robust activity in November 2015.

Dry van orders cooled after three strong months. Refrigerated vans and flatbeds were weaker due to cancellations, as OEMs cleaned up their backlogs at the end of the year. December trailer build was down overall 3% from November, with both dry van and flatbed build rates slowing. Production of refrigerated vans was up 13% m/m. The liquid tank market remained steady, and dry tank production improved. The dump trailer market continues strong.

Don Ake, FTR Vice President of Commercial Vehicles, comments, "The order numbers are down month-over-month and year-over-year, but that is only because they are compared to two of the strongest order months in history. We enter 2016 with the largest backlog ever, so we can expect another strong trailer year. The market continues to be driven by robust demand for dry and refrigerated vans. Consumer spending has been steady, and there is still some pent-up demand for vans. Production is expected to ease back moderately in the second half of 2016. Most of the vocational markets are struggling a bit, except for dump trailers, which show no sign of slowing anytime soon."