Preliminary data from FTR indicates February 2016 Class 8 truck orders are down 2% month-over-month, and are reaching a more stable pattern. 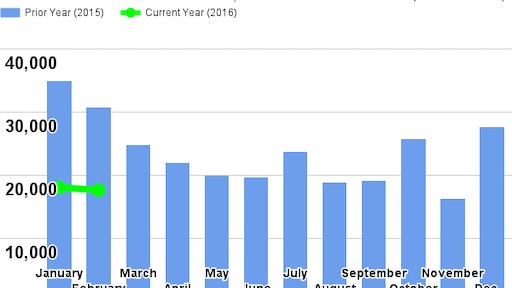 FTR has released preliminary data showing February 2016 North American Class 8 truck net orders holding fairly steady at 17,650 units, down 2% month-over-month (M/M) and 43% year-over-year (Y/Y). Net Class 8 orders are now falling into a much more stable pattern. Orders have averaged 21,000 units the last three months and the same average over the last 12 months. Total orders over the last 12 months have been 254,000, close to the FTR 2016 build forecast.

Don Ake, Vice President of Commercial Vehicles at FTR, comments, “The order patterns are very consistent with the current market situation. Fleets are basically finished expanding their truck capacity for this cycle. Purchases are now for replacement demand and the average orders and expected build are right at this level. We should expect orders to stay in a relatively tight range, around the 18,000-20,000 unit mark, for the next several months. OEMs have made significant production cuts and look to now be right-sized for the order demand. As long as there is some freight growth, the market should be stable for the next several months. Despite recent downturn in Class 8 demand, February backlogs are still expected to be 14% higher than two years ago.”

Final data for February will be available from FTR later in the month as part of its North American Commercial Truck & Trailer Outlook service.