The FTR Trucking Conditions Index fell almost 50% in March to a reading of 4.2 due to weak first quarter economics. 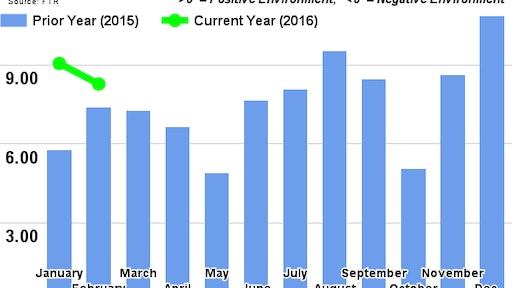 FTR’s Trucking Conditions Index (TCI) for March dropped nearly 50% from the previous month to a reading of 4.22, and is now at its lowest level since 2011. The index was negatively impacted by weak Q1 economics, and downside risks could prevent any real upward movement until late in the year. Truck loadings, and the freight market in general, are now consistent with a slow growth environment. More concerning is the fact that further falls are possible. Regulations that will reduce truckers' productivity could move the TCI higher in 2017 and 2018, as capacity becomes constrained due to the new rules affecting the industry.

Jonathan Starks, Chief Operating Officer at FTR, comments, “The freight markets have slowed significantly over the last year with March volumes just 1.5% above year ago levels. On a seasonally-adjusted basis, volumes were lower in March than what was seen in July of last year. The market has essentially moved sideways for more than half a year. The good news is that manufacturing looks to be growing again, and the consumer hasn’t stopped spending. The bad news is that manufacturing output will remain weak during most of 2016, and consumer spending hasn’t grown strong enough to make up the difference. Add in the serious inventory glut that has persisted since early 2015, and there is little to call for a significant change in the carriers operating environment for 2016. One surprise has been the sharply negative environment for contract rates in early 2016. This has occurred at the same time that spot market rates have finally stabilized. I believe it is a delayed response to the 2015 easing of capacity combined with rising fuel prices that has hurt the contract market this year. Weak rate growth will persist but not at the negative level that we are currently seeing, especially once we hit 2017 and the regulatory pressures begin to increase.”