Volvo Construction Equipment machines are being used to help Hawaii recycle over a million tons of waste each year. 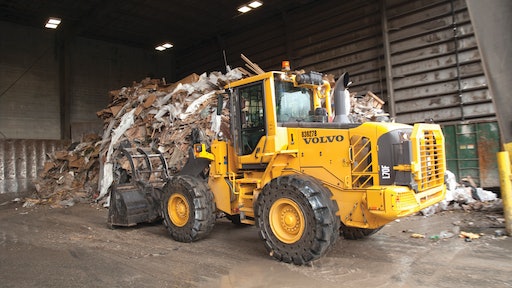 A Volvo wheel loader takes care of the rubbish.

When thinking of Hawaii, visions of beaches, palm trees, sunshine and white sand comes to mind. What you might not so readily associate it with are hundreds of thousands of tons of green waste produced annually that must be dealt with.

In other circumstances the waste could have been destined for a landfill but Oahu-based company, Hawaiian Earth Products, is dedicated to recycling the household rubbish and garden trimmings using its trusty Volvo Construction Equipment (Volvo CE) fleet.

It takes 40 experienced staff and more than 30 pieces of heavy equipment to complete the job on the secluded island in the middle of the Pacific Ocean. “We sometimes feel a bit isolated and don’t have access to all the heavy equipment services that Volvo owners on the mainland enjoy,” says Mark Cummings, vice president of operations for Hawaiian Earth Products. “That often means that our equipment has to remain in top form for longer periods of time.”

The company operates a variety of heavy equipment at several locations in the 50th state of the U.S. “Our first Volvo CE machine was a L220E wheel loader," says Mark. “We worked it hard, clocking over 14,000 hours with no major problems. We loved that machine and we still do, so we bought another one. But our first L220E was beginning to show its age and when we looked at the cost of replacing or rebuilding it – it was all in the numbers.”

“We were very pleased with the refurbishment cost estimate so we loaded our beloved L220E onto a barge for the journey to Seattle. I knew how I wanted this loader to look and perform. I was not disappointed. Our ‘like new’ L220E has worked flawlessly since its return home.”

Hawaiian Earth Products has made a corporate decision to refurbish rather than replace as much of its heavy equipment fleet as is practical. The center looks to double the life cycle of its equipment, which so far has been successful.

“The refurbishment of our loader was the highest quality rebuild that we have ever experienced,” adds Mark. “The machine looked, sounded and performed ‘factory new’ just as it did when we bought it in 2004.”

To get the job done the company’s heavy equipment must work 16-hour schedules on a daily basis in what could be described as severe working conditions, from hot and dusty, to cold and icy.

Nowhere are these harsh conditions more evident than at the company’s material recovery station on the mainland in south Seattle, WA. The machines work on enclosed landings, where two Volvo L70E wheel loaders handle between 500 and 1,000 tons of demolition and construction material every day.

One of Volvo’s core values is environmental care and has always been one of the company’s top priorities. Hawaii remains a green paradise and state with a little help from its friends.