The new Manitowoc Boom Raising System is helping to improve the efficiency of a wind turbine installation on its first use in the field. 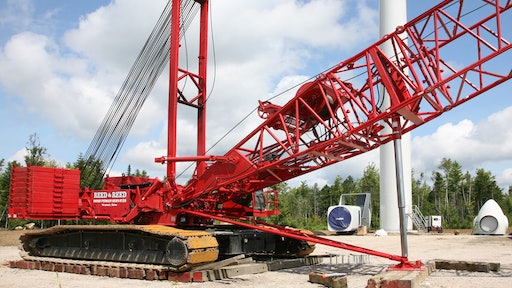 In Eastbrook, ME, U.S., contractor Reed & Reed is using Manitowoc’s new Boom Raising System to install 19 wind energy turbines at the Bull Hill wind farm. The project marks the first time the Boom Raising System has been used on a jobsite. The 19 turbines at Bull Hill are being built on roughly 100 acres and are expected to generate enough electricity for about 18,000 homes.

Ron Babb, a crane operator with the Woolwich, ME-based company reports the new Boom Raising System has not only made its wind turbine installations far more efficient, it has given the company work on a project it may not have otherwise been capable of obtaining or handling.

“This job was a real challenge for us because we moved from 262 ft. towers up to 312 ft. towers, so we needed more boom to erect the taller towers,” he says. “Without the Boom Raising System, we would have been forced to rent another crane or would not have been able to even bid on the job.”

The Boom Raising System for the 440 USt Manitowoc 16000 Wind Attachment is designed to raise longer boom lengths for wind applications without the need of an assist crane. Pat Defilipp, Reed & Reed’s project manager on the project, says the BRS has made the project easier and the work more efficient.

“For the Bull Hill job, we would have been required to switch to a larger crane, which is expensive. Also, we would have had trouble with the roads not being wide enough for bigger cranes,” he says. “The Boom Raising System has worked extremely well and we haven’t incurred any additional transport or assembly time. It’s been great on this project and we look forward to using it on future projects.”

The Boom Raising System utilizes a large hydraulic cylinder housed in a special 10 ft. boom insert section that attaches to the boom butt. The boom raising cylinder works in conjunction with the boom hoist by exerting an upward force on the boom. This is achieved by extending the cylinder downward onto prepared ground or matting. Once the boom angle is raised to 38 degrees, the boom hoist fully takes over.

“Manitowoc has devoted considerable time and thought into the engineering on the Boom Raising System to keep it simple,” Babb says.

“In the Northeast and in general, turbines are getting taller and taller—the higher the elevation, the higher the wind speeds,” DePhilipp says. “We have two Manitowoc 16000s that were getting maxed out, but now the Boom Raising System allows us to erect the taller towers. It’s been a great thing for us. The Boom Raising System fills a great niche.”

Reed & Reed purchased the Boom Raising System from Manchester, CT-based Shawmut Equipment, which has more than 50 years of experience in the crane industry. The company is a Manitowoc dealer, representing the Grove, Manitowoc, National Crane and Potain brands. It operates across New England, including Connecticut, Maine, Massachusetts, New Hampshire, Rhode Island and Vermont. It also does business in the Canadian provinces of New Brunswick, Nova Scotia and Prince Edward Island.

Founded in 1928, Reed & Reed has a long history of construction in New England. The company began by building bridges and eventually expanded into industrial facilities, marine terminals, parking garages and more. Its work at the $76 million Bull Hill project is expected to wrap up in November.

Says Peter Garret, senior superintendent on the project, “We should have been a little nervous about being the first to use this new system, but having Manitowoc’s engineering and field support behind this Boom Raising System gave us a high level of confidence. Its performance has been just as great as we expected.”