Sink or swim: Amphibious excavators find themselves treading in pretty deep water, and it is up to design engineers to find solutions to keep the machines afloat. 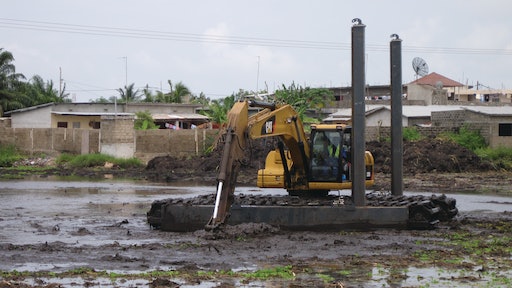 At times, “off-highway” is so far off the beaten path, even the multitude of loader, dozer and excavator options in a contractor’s arsenal aren’t enough to deal with the terrain.

Tracked machines are often used when the earth is soft or easily displaced. But, when the ground beneath you isn’t solid at all, another technique has to be implemented.

Jakob Knoop ­— owner of Knoop Machinery B.V., Donderen, The Netherlands, and designer of the Waterking amphibious excavator — supplies to countries all over the world. The company was founded in 1990 but didn’t start manufacturing amphibious excavators until 2005. Initially the company worked with the government of Holland in its wetlands, but their machines proved to be inefficient because of the time needed to move through the wetland.

“I knew there were amphibious excavators in the world, especially in America. There are lots of manufacturers on the market, but I didn’t like any of the options for my line of work, so I took bits of each brand’s construction and decided to design a new pontoon.”

The Waterking line includes four different models from 8 to 25-tons, all of which are 100% floating. “For our markets — Western Europe, Africa and Asia — our four models are enough,” though Knoop does say that if a customer were to ask for a custom design they will make it, but they have yet to run into such a request. Yanmar’s 64 kW engine is used on the 8-ton model, while Mitsubishi engines with 86.5, 114, and 129 kW respectively are used for the remaining three models of 15-, 22-, and 25-ton capabilities.

Knoop has instituted a global purchasing plan to keep costs low and customers satisfied. “We buy our parts everywhere in the world, because we ship our machines worldwide. This means a customer in Africa can buy the spare parts locally.”

Some parts are designed exclusively for the Waterking, like a sprocket wheel and other parts of the undercarriage, which do have to be ordered through Knoop Machinery; but, most of the basic hardware and the entire upper structure can be purchased wherever is most convenient for the customer.

For example, Knoop says that a majority of his African customers prefer Caterpillar excavators on top of its hydraulic pontoons because of its strong network in African countries. “At this point in time, it is more expensive to build our own excavator then to buy from Doosan or Hyundai because we aren’t building 200 to 300 units per year. We do build our own excavators, but in Western Europe machines must have Tier 3 compliant engines. Up until now, our brand wasn’t designed for Western Europe, so we used Doosan upper units,” explains Knoop.

The undercarriage is specially designed with 6-inch wide track chains, and 16-inch wide, coated steel tracks for extra durability and strength. Through Knoop’s proprietary design, the overall weight of the pontoon remains comparable to others with aluminum tracks and smaller chain widths.

The underside of the machine is the most susceptible to damage, and thus should be made the strongest to avoid leaks and eventual damage to the rest of the parts protected by the pontoons. A ceramic coating is used to protect against harsh elements. “It’s very hard and very expensive. We used it for the first time in 2006 and the machine was never painted again. The coating is still perfect. Normally you sand blast your pontoons every 2 to 3 years and recoat it. The ceramic coating is expensive but it is a long-term investment.” Plus, while getting recoated, the machine has to be disassembled, loaded on and off its transport, and recoated, and all the while production has stopped.

The 8-ton Waterking is entirely hydraulic, so the upper structure does not have to be removed from the undercarriage to drive it onto a trailer for transport. The 15-, 20- and 25-ton models’ upper-structures must be removed first. To dismantle or assemble takes only one hour.

The excavator upper section is also located exactly in the center of the pontoon platform, another design element Knoop insisted upon. “The operator can dig on both sides of the machine, equally” he says.

About a year ago a customer wanted to work in deeper water. At that point, Waterking didn’t have an amphibious excavator equipped with additional pontoons. So, the team designed fully hydraulic side pontoons and spud piles to satisfy the customer’s request.

“Normally you can only work in wetlands, but since our machine is 100% floating, when there is nothing to anchor the machine to the ground and it’s too expensive to put the excavator on a barge or pontoon, you can attach the hydraulic spud piles.” The additional pontoons are 1 meter wide and the same length as the undercarriage. This enables an operator to work in water depths up to 4 meters. Without the side pontoons, the maximum depth is around 1.6 meters.

This isn’t the first time Knoop has tackled unique design challenges by the request of a customer. Jakob Knoop is currently working with a customer to develop a pontoon able to withstand -50 C temperatures. The design is brand new. Around 80% of the work was done by Knoop Machinery and its team of engineers. The other 20% of the design team are hired experts for machine parts, such as Webasto, who have experience heating excavators for cold conditions. Designing a pontoon and incorporating the heating systems has proven to be an exciting challenge for Knoop Machinery. “It costs a lot of power to heat the pontoons to above 0 C,” says Knoop. “It’s around 150 kW to heat the pontoons, maybe more.”

The addition of a sub-zero water-capable pontoon design would only further add to the many uses of the amphibious excavator, leaving few areas the off-highway industry can’t cover.

The Big Float’s steel/aluminum track units (10 meters long by 1.5 meters wide) are comprised of a sprocket, an idler, track rollers and track chains. The patented construction of the hydraulic undercarriage system allows an operator to pull the pontoons closer together for driving onto a transport (3.5 meters total machine width) or over roads by means of a hydraulic cylinder. At full extension, the machine width is 5.5 meters.

When in water under 2 meters deep, the Big Float is not fully floating, and thus can be driven through the water using the crawler-pontoons. The pontoon structure is divided into eight baffle sections to ensure safe floating. With the addition of attachable additional side pontoons, the Big Float can work at greater depths, or can be transported over deep water, as it is considered fully-floating.

The Big Float?s steel/aluminum track units (10 meters long by 1.5 meters wide) are comprised of a sprocket, an idler, track rollers and track chains. The patented construction of the hydraulic undercarriage system allows an operator to pull the pontoons closer together for driving onto a transport (3.5 meters total machine width) or over roads by means of a hydraulic cylinder. At full extension, the machine width is 5.5 meters.

When in water under 2 meters deep, the Big Float is not fully floating, and thus can be driven through the water using the crawler-pontoons. The pontoon structure is divided into eight baffle sections to ensure safe floating. With the addition of attachable additional side pontoons, the Big Float can work at greater depths, or can be transported over deep water, as it is considered fully-floating.