Over the years, nitrogen tire inflation has been talked about, touted, researched, and challenged. 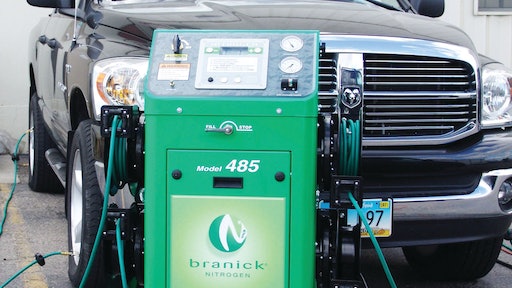 Over the years, nitrogen tire inflation has been talked about, touted, researched, and challenged.

NASA, the US Military, commercial aircraft, Indy, and NASCAR teams all use nitrogen in their tires, which has proven to provide a more consistent tire pressure. Other benefits nitrogen inflation has been linked to include longer tire life, minimized service needs, enhanced safety, and fuel efficiency. With fuel costs and tire prices rising, nitrogen inflation has again sparked the interest of the over-the-road and off-road industries.

So, what do we know about nitrogen? We know that it is slower to migrate out of a tire than air. Sure, at what rate may be subjective, but due to the larger molecule size, this is a fact. Under the same circumstances, a tire filled with nitrogen will have slower inflation pressure loss rates than a tire filled with air. Therefore, the longer your tire holds its proper tire pressure, the longer you will see the benefits of a properly inflated tire including extended tire life, lower fuel costs and ultimately, less downtime due to tire issues.

The various consequences of underinflated tires are well known: excessive wear, larger temperature fluctuations, higher rolling resistance, and increased fuel costs. Many say you can get the same results inflating with air and having a tire maintenance program. The big question is: How many actually stick to a tire maintenance program? Not many. Most have good intentions, but often too many other details become the priority. With nitrogen, a tire maintenance program is still necessary, but due to holding a tire pressure longer you can expect to see a decrease in service labor costs, service time and decreased top-off needs. Because nitrogen inflation has the potential to significantly decrease costs associated with tire service issues, it is definitely worth considering.

Another benefit to nitrogen is that it is a dry, inert gas. This may be obvious, but it is worth pointing out that removing oxygen from a tire and replacing with nitrogen also means less damage to inner liners, steel belts and rims due to oxidation and condensation.

In the Goodyear Off Road Tire Maintenance Manual, they identify another reason nitrogen inflation is recommended stating, “Many original equipment manufacturers (OEM) recommend nitrogen inflation. It helps to minimize the possibility of explosion due to excessive heat from external sources.” Off-road vehicles are using nitrogen in tires more often to achieve consistent tire pressure and to prevent explosions. Nitrogen is not combustible and according to the Occupational Safety and Health Administration (OSHA) it has been issued a flammability rating of zero from the National Fire Protection Association. In a tire filled with air, the typical causes of inner tire ignition include excessive braking, dragging the brakes, welding on rims of mounted tires (which is a huge no-no anyway); and although less likely, but still a viable threat; lightning strikes. Switching to nitrogen tire inflation may not only be a wise financial decision, it may also prove to be safer.

Just because tires are filled with nitrogen doesn’t mean the condition of the tires will automatically change. The key is that the tire will hold its proper tire pressure longer, which is why it can be expected to see benefits such as longer lasting tires - possibly adding three to four retreads to the original tire, and a decrease in fuel costs.

Downtime is a dirty word in any transportation, construction or mining industry. A few years ago a company out of Greenville, MI, was determined to get a handle on its fuel use and downtime issues and documented the experience when switching their fleet of over-the-road trucks to nitrogen. Pete Larsen, the president of Larsen Trucking, at the time wrote: “In the first four months of 2006, our on-road tire repair expenses calculated by tire failure were $5,126.72 per month. In the same period for the first 6 months of 2007 [using nitrogen], the on-road tire repair expenses were $929.95 per month - an 82% reduction.”

This result can’t be expected for every company, but it is one example of how nitrogen fit a need to control some costs that had at one time seemed uncontrollable.

The biggest challenge faced today is availability. By providing nitrogen-filled tires at the OEM level, it is likely dealers would follow suit, ensuring their customers have a nitrogen resource available. The benefits to providing nitrogen filled tires right off the line could prove to be lucrative from the stand point of additional options. With the potential of service, labor, new tire, and fuel efficiency costs to be significantly reduced, nitrogen now becomes a more viable and attractive upsell to your customer. If you provide nitrogen inflation first, you’ve now gained new customers to make up for your service program needs.

The Tire Retread Information Bureau (TRIB), a non-profit, member supported industry association for tire retreading and repairing has released an article discussing the benefits of nitrogen inflation. In the article they report, “Nitrogen inflation minimizes moisture and oxygen in a tire so there is less rubber degradation and no corrosive properties as found in compressed air. A reduction in rubber oxidation slows a tire’s aging, improving the casing’s structural durability, lengthening its useful life and yielding a higher proportion of retreadable casings that can survive more retread cycles. All of this helps lower operating costs.” TRIB also notes that those who have normally avoided retreading are now willing to consider retreads when nitrogen inflation has been used.

Harold Herzlich, an accomplished chemical engineer and writer in the tire industry agrees, “A casing that has had a high purity nitrogen inflation service history will be less weakened by heat accelerated oxidation that results from under inflation/over deflection misuse,” Herzlich said. “This should render a more valuable recap casing.”

Herzlich also points out that both the science and tire data prove the value of high purity nitrogen. “Nitrogen offers our compounders a ‘do no harm’ tool to compliment the magical blend of materials used for optimum tire performance. Even though tires already use a strong and secretive materials technology that addresses many needs, inert nitrogen inflation offers additional service advantages.”

Nitrogen inflation technology has evolved over the years. Machines that produce the right purity, at the right speed at the right price have been the main goal. There are generators that use pressure swing absorbsion (PSA) technology, and generators that use membrane technology. Both have a place and both have held their ground in the market. Brian Brasch, president at Branick Industries states, “There is no doubt that nitrogen technology today is head and shoulders above what it was just a couple years ago,” Brasch said. “The demand has literally forced a superb family of nitrogen generation products and the market is prime for both availability and affordability for the consumer.”

In addition to speed, Brasch also states that choosing a generator that will produce the right purity is critical. “We have large account customers that require fast, high purity generators. When dealing with large tires, you want the nitrogen advantages that come with high purity, as well as the speed in order to get up and running again quickly. Obtaining 98% purity in a tire with a compressor that is half the size of other models isn’t a luxury, it’s a necessity.”

Some big names in the transportation industry have justified the return on investment and are already running on nitrogen-filled tires, including Wal-Mart and Safeway. Wal-Mart recently reported that it is 60% of the way to doubling their shipping efficiency by 2015. Included in its sustainability program are nitrogen-filled tires for its entire North American fleet. Elizabeth Fretheim, director of strategy and sustainability for Wal-Mart’s fleet operations stated: "We are rolling out a program to do nitrogen filling of tires that will help reduce rolling resistance.”

Wal-Mart is also known for their environmental strategies and is another reason why nitrogen is so attractive. It takes 22 gallons of oil to manufacture a tire. To retread a tire just once requires approximately 7 gallons of oil, saving about 15 gallons of oil per tire. According to TRIB, retreading also saves on “tapping” rubber trees, which helps preserve the natural environment and reduces the loss of natural habitat. It also goes without saying that saving fuel due to proper tire pressure (less drag and better contact patch with the road), decreases the amount of fuel emissions, thus helping preserve the air we breathe.

The prediction is that it is only a matter of time before SmartWay, the collaboration between the EPA and freight transportation industry, adds nitrogen inflation to their point system, which recognizes efforts that improve fuel efficiency and save companies money. Nitrogen tire inflation has piqued the interest of several industries outside of racing and aviation. It is now being seen as a practical option for both fiscal and safety reasons for everything from construction and mining to trucking and agriculture. With big names like Wal-Mart and Safeway buying into the technology, it is safe to say that nitrogen inflation is here to stay. So now, it becomes a race to see who will take advantage of the benefits sooner rather than later.

Stacey Majkrzak is marketing manager for Branick Industries, based in Fargo, ND. Since its founding in 1917, Branick has been an industry leader in tire service and repair equipment, tire inflation equipment and nitrogen systems. Today, Branick is leading the industry into a greener tomorrow by focusing on fuel conservation, and helping customers reduce their carbon footprint. With manufacturing locations in the U.S., Branick Industries is committed to maintaining the well-earned reputation for quality, service, innovation, and value.