No two tire solutions are the same 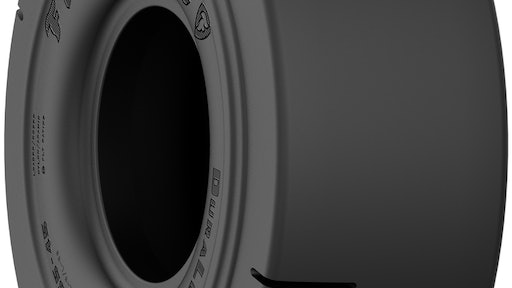 The Firestone DuraLoad PT L5S bias tire features a plain tread, which prevents cuts or punctures from damaging the tire in severe applications.

Like most industries, durability and reliability are key factors tire manufacturers must keep in mind when developing new tire technologies. “Longer life and more efficient operation; those are the two challenges we’re always out to meet for our customers,” says Barry Rexroad, Director, Planning and Strategic Accounts at Bridgestone Americas Tire Operations - Off Road Division (company information, 10055412), Nashville, TN.

In addition to these requirements, each industry or application has its own unique challenges for which tire manufacturers work to find solutions. The TM800 SugarCane Tire (product information, 11075558) from Trelleborg, for example, was designed specifically for sugar cane applications. Trelleborg (company information, 10056201), headquartered in Italy, designed a smoother lug base and more rounded tire to effectively cope with sugar cane stubble in a manner that conventional tractor tires would not otherwise be able to do.

Advancements in lug design, such as Trelleborg’s, as well as treading and sidewall technology are just a few of the methods tire manufacturers are using to design tires which meet individual application needs.

Road lope—the bouncing or swaying of equipment during road transport—has become a growing concern in the agricultural industry as more and more tractors travel between farms and fields. Scott Sloan, Ag Products Manager for Titan Tire Corp. and its brand of Goodyear Farm Tires (company information, 10056188), Quincy, IL, explains that as a tractor gets into the 18 to 22 mph range of travel, it begins to bounce frequently and cause operator discomfort. “What happens is the sidewalls on a conventional tire are basically big balloons, for lack of a better term, and as that tractor hits a bump or a dip in the road, it’ll compress the sidewall,” he says. “And just like bad shocks on your car, it just continues to bounce.”

In an effort to help minimize this, Titan introduced its low sidewall (LSW) tire technology to the agricultural market (product information, 11108977). Having a lower sidewall provides a damping effect that minimizes the amount of bumps the operator feels during road transport. Sloan says operators may still feel the tractor bounce occasionally, but it’s less often compared to when a conventional tire is used.

While the outside diameter (OD) of the LSW tire does not change compared to a conventional tire, it does feature a smaller sidewall and larger rim diameter. Combining all of these characteristics together enables the tire to reduce the instance of road lope as well as offer stability, improved handling and performance. “We’re showing over and over again that if you change the diameter and adjust the aspect ratios of these tires, it does have a drastic and dramatic effect on the performance of that equipment,” says Sloan.

According to Sloan, the LSW technology can be combined with Titan’s Increased Flexion (IF) tire technology to allow inflation pressures to be dropped for reduced soil compaction (learn more, 10770398). “A lot of times growers won’t drop the inflation pressure of the tire because they don’t like that squirmy feeling [it creates],” he explains. “With the LSW, since we’ve got less sidewall, we’re able to drop those pressures down and maintain lateral stability.”

Titan is focusing its efforts on expanding the LSW tire offering to additional product lines in the agricultural market. Sloan says the company also has LSW tire concepts for applications ranging from skid steers to articulated dump trucks, and will continue to develop tires for additional applications.

Developed specifically for severe-duty applications in the mining, construction and aggregates industries, the Firestone DuraLoad PT L5S bias tire is the latest addition to Bridgestone’s line of DuraLoad tires (product information, 11201690). Bridgestone’s Rexroad says the company’s goal was to offer a bias tire that would provide performance, reliability and durability in severe applications.

Utilizing a plain tread (PT) design—no tire pattern or lugs—on the tire was the first step to achieving these goals. Rexroad says the PT works best in severe applications, particularly those with a lot of rocks or debris, because of its ability to deter cuts or punctures from occurring. “It provides extra thick rubber all the way across the tread surface to resist cuts,” he says.

Further protection is provided by Bridgestone’s patented sidewall rib technology which acts as a buffer between the tire and rocks or other sharp objects in the field. The sidewall rib takes the impact of the rock or debris and deflects it, preventing it from causing any damage. “You reduce your road hazards, which in the end means more productivity of the equipment and more money saved for the end user,” says Rexroad.

Siri Speegle, Product Manager at Bridgestone Americas Tire Operations, says that while developing the tire, Bridgestone worked hard to ensure proper wear over the tire’s lifespan. She says typically in the past bias tires were more rounded at the crown which led to rapid and uneven wear. “Our challenge was to develop a tire that had more flat contact surface with the ground and therefore alleviated some of that wear on the high point of the crown,” explains Speegle.

Rexroad adds that the pressure in a typical bias tire makes it want to be rounder in the tread. “A lot of work went into simulating, developing and contouring the design of the DuraLoad tire to optimize that tread surface and make it flat,” he says.

The Swiss army knife of tires

When the trucking market began collapsing around 2008, many fleets consolidated their operations to include both regional and long-haul capabilities. However, this now required truck tires that could be used for both types of operations. “They needed to have the flexibility, almost like the Swiss army knife of tires, that could give them fuel efficiency yet still give them mileage and traction so they wouldn’t have to think about what truck goes where; they just have to say ‘this is our route [and] any truck can go on it,’” says Alex Chmiel, Director of Commercial Vehicle Tire Marketing at Continental Tire the Americas LLC (Continental, company information, 10271055), Fort Mill, SC.

Upon seeing this need, Continental began developing a tire that would meet the requirements of both regional and long-haul operations, and in 2010 introduced its HD Hybrid tire in Europe. As popularity of the tire grew, the company started developing versions for other markets. In early 2013, Continental launched its hybrid tire for the U.S. market, the Conti Hybrid HD3 (product information, 11126826).

SmartWay verification is important for long distance applications—typically considered to be 2,500 miles in each direction—because it ensures the tire offers fuel efficiency benefits, which have become increasingly more important in recent years due to rising fuel costs. Chmiel says Continental was able to achieve SmartWay verification by optimizing the tread pattern and working with various compounds (learn more, 10954647).

Regional applications, on the other hand, focus more on durability because the trucks are turning more which often causes a high amount of scrubbing—the wear and removal of rubber from the tire. “The number one thing that we needed to do was find a way to reduce the irregular wear of the tire,” says Chmiel. To do this, Continental developed a directional tread pattern that stabilizes the tread in order to reduce irregular wear.

Continental used over 500 sipes—the cuts on the tread—to ensure optimal traction throughout the tire’s lifespan. “The more sipes that you have, the more traction you have on the road with that tire,” explains Chmiel. Alternating the sipes on the tire creates a different tread pattern through different stages of the tread life. As the tire wears down, the tread pattern actually changes a bit, says Chmiel. “What you’re able to do is provide the sipes that are necessary to retain traction in the tire while also achieving the stiffness within the tread to reduce irregular wear and allow for better mileage.”

Three different types of sipes are included on the tire. Along the outside shoulder of the tire is a pocket sipe which provides positive performance in severe weather conditions. The second sipe used, called the 3D sipe, stabilizes the tread during acceleration and braking, while the third sipe, known as the void generating sipe, changes the amount of open space within the tread patter to manage the lifetime traction of the tire. “That’s the actual sipe that’s going to change the tread pattern as we go through the life of the tire,” says Chmiel.

The market is moving increasingly more towards the use of hybrid tires, Chmiel says. “We did a study of fleets in the United States [and] found that even before this concept came out approximately 30% of the fleets in their daily [operations] would qualify and work within a hybrid application.” In addition to the Hybrid HD3 drive tire Continental released this year, the company is also looking to develop hybrid steer axle and trailer axle tires to provide a full portfolio of hybrid tires to the market.

As new challenges continue to arise in the field for OEMs and operators, designing to meet individual application or industry needs will continue to be the trend for the tire industry, right alongside meeting durability and reliability requirements.