Don’t Stop: Shift on the Fly

Demand for tractors under 70 hp to have comfortable and high efficient transmissions—similar to those used in the higher horsepower ranges—is increasing. 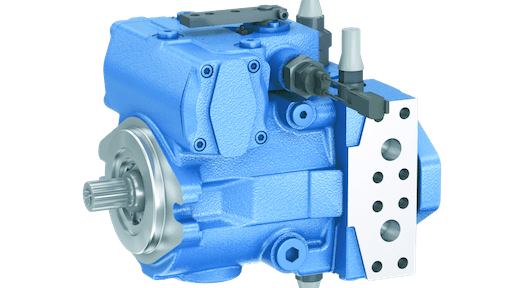 For decades, modern agricultural tractors have experienced a strong development in drivetrain and gearbox technologies. Common technologies like powershift transmissions and hydromechanical power-split gearboxes (CVTs) have found their way into almost every high-end tractor. Farmers around the world appreciate the comfort and power density of such transmissions.

Tractors smaller than 70 hp are mainly manufactured for and used in the Asian market, but also the European market on vegetable and fruit plantations and North America for landscaping. Especially in the European market, demand for tractors with comfortable and high efficient transmissions—similar to those used in the higher horsepower ranges—is increasing. Tractors within this smaller range are normally equipped with mechanical (synchronized and/or stand-still) or hydrostatic transmissions with medium-pressure axial piston units.

The hydrostatic transmission for small tractors under 70 hp has a two-speed stand-still gearbox with medium pressure variable axial piston units in closed circuit, where the pump displacement is variable and the motor displacement is fixed.

The disadvantage of such a solution is that a gear shift can only be done when the tractor is not in motion. The hydrostatic transmission is always engaged and must be deactivated for the gear shift. To interrupt the torque transmitted by the hydraulic motor, the vehicle has to come to a standstill (0-speed). Only then can the driver shift gears.

Usually this is sufficient for the majority of operators, but does not fulfill requirements such as:
continuous variable speed throughout the entire speed range (continuous acceleration)
simple handling (semi- or full automatic gear shift)
fast shift during travel, and
high efficiency as with high-pressure variable axial piston pump and motor.

The pump/motor combination of the Rexroth Shift on Fly (SoF) system, together with a high-end controller and corresponding software, allows the driver to easily shift gears semi-automatically in a given window with the push of a button, or fully automatically.

The key to the Bosch Rexroth solution is the bent-axis design motor with electro-proportional control, which can swivel to zero displacement (Vg = 0 cm3/rev).
At zero displacement, the transmitted hydraulic motor torque is 0 Nm. This means that the two-speed transmission input torque is also zero and shifting becomes possible. The difference between transmission input and output speed is equalized with a synchronizer and supported by the speed of the hydraulic motor in a downshift condition.

An A4VG high-pressure variable pump of swashplate design is used for the hydraulic power source.

Several control options are available for this pump. The unit can be either controlled via an EP (electric proportional control), DA (hydraulic control, speed-related) or HW (hydraulic control, mechanical servo) plus DA, optional with dedicated electronic hardware and software package. In this specific application, an automotive speed control is realized. The gas pedal is mechanically connected to the pump control module. Additionally, there is a hand lever which controls the diesel engine speed. This lever is friction controlled and overrides the foot controlled gas pedal. This option allows adjusting the diesel engine speed independently from the travel speed.

By using a high-pressure closed circuit system with a variable hydraulic motor, a 20% extend of the ratio can be realized. On top of the ratio extend, the high pressure variable units increase the tractive effort up to 30% compared to two-speed hydrostatic transmission solutions.

Due to the growing population worldwide, the need for more cultivated farm land will Increase. The demand for agricultural tractors, even within the small horsepower range, will increase. Enhanced driving technology, combined with fuel efficiency and comfortable machine operation are the drivers for future drivetrain systems.

Bosch Rexroth’s SoF system combines the advantages of a manual shift gearbox with a closed circuit high-pressure hydrostatic transmission. The SoF solution increases the productivity significantly due to the fact that the tractor can continuously operate at any desired speed in any given operation point, without stop.