The transportation solution for environmental sustainability

As more people around the world seek a better, cleaner, more productive and sustainable future, companies in the vehicle sector see an opportunity to leverage their expertise to lend a hand. 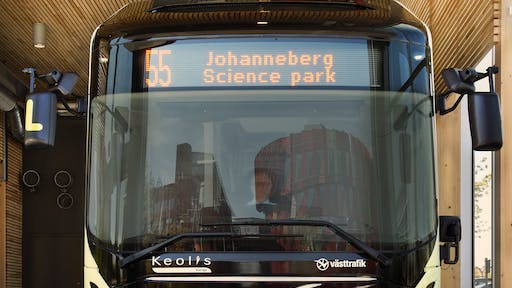 There is no denying the growing interest and acceptance of electrified transport solutions around the world. “It is vital that all the relevant positive forces cooperate in order to speed up development,” says Jessica Sandström, Head of Volvo Buses’ City Mobility Team.

In 2013, Volvo took the initiative for ElectriCity, broad-based cooperative venture located in Gothenburg, Sweden, that focuses on the development and demonstration of innovative solutions for the next-generation of sustainable public transport. The program’s long-term goal is to test and evaluate products and services that will increase the attractiveness of public transport, and to find solutions that can be scaled up to implement outside of the demonstration area currently in place.

Volvo is responsible for the development of the electric buses that operate on the newly created bus route 55. The Gothenburg public transport system consists now of three completely electrically driven buses and seven electric hybrid buses from Volvo Buses. “Through ElectriCity, we can jointly test new solutions for public transport and demonstrate how they function in real-life conditions,” says Sandström.

“We want to be a part of creating the cities of the future by providing public transport systems free from emissions, noise and congestion. Our long-term investments rea based on our determination to be a part of solving one of the greatest challenges faced by mankind: environmental sustainability,” she says.

In 2005, Volvo decided to develop an electric bus solution for city operation. By 2009, it had launched its 7900 hybrid bus with silent take-off and a 39% fuel savings and CO2 reduction; over 2,000 units have already been sold to 21 countries around the world.

In 2014, its 7900 electric hybrid bus (with 75% fuel savings and 60% energy savings) was released equipped with a lithium-ion battery mounted to the roof of the bus and charging rails placed above the front axle.

The first fully electric city buses under the Volvo brand have already hit the streets of Gothenburg. “We believe all three levels of electrification—hybrid, electric hybrid and full-electric—are needed in the cities,” Sandström says.

The lithium-ion battery is able to be recharged at the route’s end stations through a global cooperation for charging infrastructure developed with Siemens and ABB. “In Gothenburg, Siemens has delivered the two charging stations at Chalmers Johanneberg and Chalmers Lindholmen, which is an indoor stop,” Sandström says. “The goal is to create an open standard to be used by any charging or bus manufacturer.”

Volvo’s energy storage system (ESS) was largely developed in-house with a purchased battery pack with internally created system control and functionality. The usable energy of 8.5 kWh can be charged in six minutes after approximately 30 minutes of driving. For an electric hybrid, the batteries need to be replaced after four years, while in a full-electric bus the batteries are replaced after six years, which is equivalent to 60,000 km per year.

“Volvo’s 7900 electric hybrid runs in electrical drive mode for up to 7 km, which equates to about 70% of the route, and can drive up to 55 km per hour in electric mode,” explains Sandström.

The in house development of the driveline system was actually one of several concepts from both within Volvo Group and outside, ultimately deciding on the internally designed version. The electromobility platform allows Volvo to meet any future needs of the company internally, including the trucks and construction equipment segments.

Volvo Buses is now looking into new features to continue to add value to its hybrid products, including zone-specific operational control of the vehicle. “With Volvo Buses’ Zone Management System, GPS is used to determine where along the route the bus should run on electricity or diesel, and how fast it may drive in the various zones in accordance to environmental, safety and noise regulations and restrictions,” explains Sandström.

In safety zones, for example, mandatory stops, virtual speed-bumps and active braking is being looked into, while environmental zones can be expanded to cover more area should it be necessary.

“We are on the threshold of a technology revolution in the transport sector. ElectriCity is about to take over as the main energy source for public transports in urban areas,” she says.

“The advantages are many: energy efficiency, zero emissions and silent bus traffic. Electric bus systems mean that cities can be planned in entirely new ways – buses can come closer to where people live and move,” says Sandström. Gothenburg, for example, is being developed into a denser, more sustainable and open city.

The GN 415 side thrust pins hold parts with side pressure and exert an additional downward force.
JW Winco, Inc., A Ganter Company
August 22, 2021
Follow Us