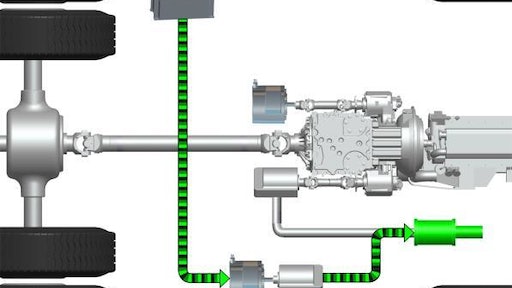 Since 2006, Montreal-based hybrid solutions developer Effenco Inc. has been fine tuning its Active Stop-Start energy management system. A majority of its work is focused on Class 6-8 on-road vehicles with start-stop duty cycles, though it’s expanding into off-road applications like cranes, drilling equipment and terminal tractor applications.

The system is built for vehicles that spend a significant proportion of their operating hours immobile when the engine is not needed to propel the vehicle. The company realized early on that vocational vehicles duty cycles were very different and a one size fits all hybrid energy strategy was not going to work across applications. There is therefore a significant portion, around 40%, of the entire vocational truck market that Effenco will not serve because it does not fit its application profile: high idle time and a significant proportion of vehicle movements made at low speed.

The Active Stop-Start technology consists of a constant mesh PTO-mounted starter generator. An electric PTO (what the company calls their eSmart PTO) draws stored electric power from ultracapacitors to power the vehicle body loads as well as the chassis’ hotel loads when the engine is off. Whenever speeds are fast enough to allow it, energy in the ultracapacitors is collected during braking events while in low speed operation, limited power may also be taken from then engine. The application’s energy and power needs determine the number of ultracapacitors used on the system.

The fourth generation design iteration also brought on significant weight savings. “We were able to reduce the size of components, but the big weight savings came from giving up the hydraulic power storage. High pressure accumulators for hydraulic energy storage are heavy-walled tanks, and other elements of the hydraulic energy transfer system like the pump and manifold add significant weight. “We use 100 pounds of ultracapacitors to store as much energy as 400 pounds of hydraulic equipment and oil,” says Colin Ryan, President at Effenco Inc.

“The most recent innovation has been to update the starter-generator from our older hydraulic motor to a a high powered electric motor,” says Ryan. “The evolution to electric power was due to the simultaneous effect of  falling costs and improved performance of transportation grade power electronics driven largely by the growth in electric cars and other electric propulsion applications. Most people haven’t seen the potential in the heavy-duty vehicle space, but the actual energy transfer equipment and duty cycles are similar,” explains Ryan. “The system we offer is not light-duty like in automotive, but the amount of energy we are talking about when we’re deploying an active start-stop event is in the same range as propulsion systems in electric cars.”

Originally the system utilized hydraulics and an accumulator to capture excess kinetic energy from braking events; however, the system, now in its fourth generation, has evolved to an all-electric hybrid system. The goal is of course to standardize the system package as much as possible. “Right now the geometry of the packaging with the ultracapacitors mounted above the electric PTOallows us to configure different versions of our PTO for different applications without changing the envelope,” says Ryan. “Our power pack’s is built narrow (23 inches) and its entire volume occupies less than 11 cu. ft. on the rail. We can swap out pieces inside of that package while continuing to respect the overall dedicated size envelope.”

There was little trade-off in power density between the hydraulics-based power system and the current all-electric one, explains Ryan. To start a large diesel engine (in the 8-15 L range) quickly enough to ensure a seamless drive experience requires 50 hp, which gets the engine up to speed in about 600 milliseconds.

A vehicle stopped with the engine on and transmission in drive can consume  between 0.5 and 1.5 gallons per hour while at idle.  At idle, the engine consumes energy to overcome internal friction, to pump oil, coolant and fuel and as well as to push exhaust gases through post treatment systems and operate them. This energy base load is eliminated when the engine is turned off.

Besides restarting the engine, the energy stored in the ultracapacitors is used to power auxiliary functions when the engine is off, such as bin lift systems on refuse vehicle applications which use about 12 hp.

“Take a fuel delivery truck, for example, which is equipped with a 300 hp engine and may only use about 5 hp to pump fuel. Of the diesel fuel required to keep the engine rotating versus the diesel required to run the fuel unloading  pump, 80-90% is used for overcoming internal friction and the remainder is used for the PTO application. It’s a complete waste of energy,” Ryan says. “So, the strategy that we have espoused is eliminating the load which is simply overcoming internal friction for no mechanical purpose. In order to keep the engine off longer, we use braking energy stored in ultracapacitors to run all of the auxiliary functions with the engine off.”

“Restarting [the engine] determines the maximum power requirement of our system, but the energy requirement is almost always dictated by the auxiliaries we have to power when the engine is off to make the energy balance work,” Ryan says. “When you’re powering a bin lift system or a compactor on a garbage truck, you need to deliver power over a span of 25 seconds, not a one second engine turnover, so the energy becomes the design consideration.”

Not only does the absolute power required to start the vehicle need to be considered, but also the number of times the engine will be started in a given period of time. The Effenco Active Stop-Start hybrid system was designed to withstand 120 restarts per hour (1,500 restarts per day) in operating conditions of 100 F ambient temperature. “Were we to have a larger truck that stopped less frequently, like a dump truck that only stopped once every minute or so, we probably wouldn’t have to upgrade the power for that condition,” Ryan explains.

“We get asked quite a bit, ‘Don’t you cause additional engine wear every time you turn it on?’ On both a theoretical and practical level, the answer is, ‘No.’ As a matter of fact, there are several well-known benefits of eliminating idle, notably a reduction in lube oil contamination, a drop in soot formation per gallon of fuel burned and lower temperature fluctuations in both the engine and exhaust. Actually eliminating idle as a proportion of total running time is the best strategy to prolong engine life.”

An interesting additional benefit Effenco hadn’t considered with its system is its positive effect on resale value. With terminal tractors, for example, when they are sold used, the value is dependent on total engine hours accumulated. By using the Effenco hybrid system, the hours per year of usage are easily cut in half, says Ryan. “It’s the same with off-road construction equipment; all of the wear on vehicles is cataloged by cumulative engine hours. By turning the engine off during idle times, we are saving a lot of unnecessary engine hour accumulation and ultimately adding to the vehicle’s resale value. Essentially, we can make what used to be wasted idle time profitable for the owner.”

A common pitfall that large developers of heavy vehicle hybrid propulsion systems have made, suggests Colin Ryan, President at Effenco Inc, is to develop a one-size-fits-all hybrid platform with the objective of standardizing the systems across applications and reduce customization costs and time. “The chassis options are all basically the same for large OEMs across several applications to minimize manufacturing costs. Initial developers of hybrid systems were expecting that it meant the hybrid system would be a standardized option.

“The failure with that approach is due to the enormous differences in the way the trucks are used,” says Ryan. “A refuse truck averages about 5 mph between stops. Cement trucks typically drive from point A to point B and a higher speed and then sit idle for long periods of time at the dump and load sites. Just these two options alone are fundamentally very different in the way the energy is used and the ratio of the energy that goes to the PTO versus the wheels.”

“Before Effenco developed its system, we had reviewed around 20 TB (terabytes) of CAN data from a wide range of applications including refuse, dump trucks and terminal tractors. It was very obvious to us that a one-size-fits-all approach like large hybrid system manufacturers were creating were not going to provide adequate fuel savings across the board.”

Batteries are a better power source when the time over which you want to consume the energy contained within the batteries is somewhere between 1-8 hours. “That’s the sweet spot for batteries,” says Colin Ryan, President at Effenco Inc. “You wouldn’t use batteries unless they could supply the power you needed for at least an hour, which is a design criteria for a bucket truck, for example.”

The energy density for batteries is good, but one of its limitations is its ability to absorb charge. For fast reclamation of the massive amount of excess energy generated during a short braking event, it’s very hard to transfer into a battery, whereas ultracapacitors are well suited to absorb energy quickly.  Furthermore, ultra-capacitors can be charged 3 to 5 million times without losing their electrical properties while batteries face significant cycle limited.

“At Effenco, we are trying to design our energy storage so that it is usable over the power dispatch cycle of a heavy vehicle, which tends to be much shorter than one hour. If you think in terms of a refuse truck, it’s moving every 15-60 seconds between cycles,” says Ryan. “Because of this start-stop duty cycle, we are in a position to recharge ultracapacitors once every minute.

“That’s what our system is engineered for, to collect and dispatch power over a short time cycle. Most vehicles, whether they are accelerating in traffic or carrying out the vocational function they are designed for, tend to repeat cycles anywhere from 15 seconds to 3 minutes. That is the meaningful power window within which we are looking to collect and dispatch unused energy normally lost through friction and heat dissipation. That’s why ultracapacitors are very useful.”