Bendix brake shoes will now include a label emphasizing the importance of using the proper materials when relining to ensure compliance with the Reduced Stopping Distance mandate. 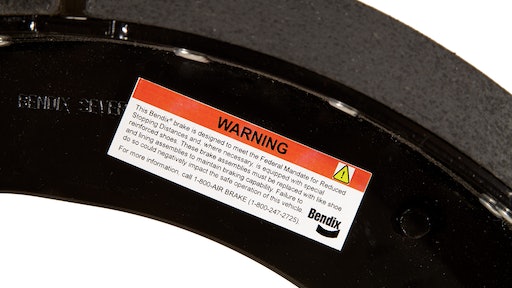 “This Bendix brake is designed to meet the Federal Mandate for Reduced Stopping Distances and, where necessary, is equipped with special reinforced shoes,” the label reads. “These brake assemblies must be replaced with like shoe and lining assemblies to maintain braking capability. Failure to do so could negatively impact the safe operation of this vehicle.”

Phase one of the Reduced Stopping Distance (RSD) mandate took effect in August 2011 for new three-axle tractors with Gross Vehicle Weight Ratings (GVWRs) up to 59,600 lbs. Phase two of the mandate, aimed at tractors with two axles, as well as severe service tractors with GVWRs above 59,600 lbs., takes effect August 1, 2013.

“Even two years after the RSD mandate went into effect, we still regularly field questions from fleets and drivers about replacement brake lining performance and RSD compliance,” says Gary Ganaway, BSFB Director of Marketing and Global Customer Solutions. “There’s a lot of misinformation to sift through concerning the certification of aftermarket brake linings and today’s high performance brakes, so the industry’s confusion is understandable. It’s important for everyone to understand the impact that friction selection has on safety, and that not all replacement friction marketed as acceptable under RSD will actually perform to the standard.”

According to Ganaway, the longtime industry standard test for certifying brake linings, Federal Motor Vehicle Safety Standard (FMVSS) 121, is no longer adequate in the RSD environment. Most linings that pass the dynamometer requirements do not meet today’s higher vehicle performance requirements.

None of the comparison friction used in the relining of the RSD brakes – materials readily available in the aftermarket – met the mandate’s stopping distance requirement. And the worst-performing friction material – a popular aftermarket lining – had a stopping distance of 311 ft. The 96-foot difference between that and the high performance friction represents a 45% decrease in performance – approximately five passenger car lengths.

“Nothing could more starkly depict the highway safety that is at stake, and the importance of using the right friction when it comes to relining high performance, RSD-compliant brake systems,” Ganaway says. “Although advancements made in brake engineering and friction material in recent years have significantly improved both safety and performance, those steps forward can be dangerously undermined through relining today’s brakes with improper friction material.”