Dana has introduced a short-drop version of the HVT R2 with redesigned transmission case that reduces input/output distance and an enhanced version for engines up to 235 kW. 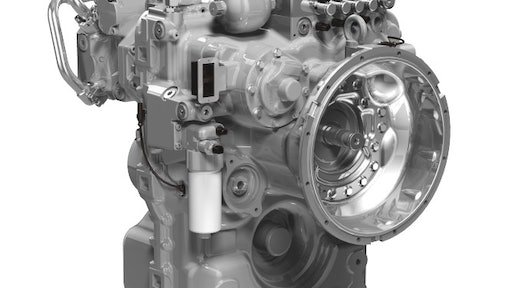 Dana Rexroth Transmission Systems has introduced a short-drop version of the R2 hydromechanical variable transmission (HVT), with pre-production testing by original-equipment manufacturers expected to begin by the end of this year.

The short-drop version of the HVT R2 is ideal for a range of material-handling, pushback, and forestry applications. Featuring a modular configuration with a redesigned transmission case that reduces input/output distance, it can be adapted for a variety of vehicles, including forklift trucks, empty container handlers, and terminal tractors. This hydromechanical variable transmission supports power outputs from 130-200 kW (174-268 hp).

In addition, Dana Rexroth is designing an enhanced version of the HVT R2 that supports engine ratings up to 235 kW. It will supply vehicles with more power to simultaneously perform travel and work functions. Units will be available for pre-production testing by vehicle manufacturers in early 2018.

“Since production began on the long-drop version of the HVT R2, the power-split transmission program from Dana Rexroth has met industry demands for improved fuel economy, controllability, and reliable performance in real-world operating conditions,” says Roland Friedl, head of sales and product management for Dana Rexroth Transmission Systems. “This new short-drop version of the HVT R2 will deliver these benefits to an even wider range of material-handling vehicles and expand this technology to other off-highway applications.”

The HVT R2 has demonstrated fuel savings of up to 25% over traditional transmission designs with additional savings possible through further optimization with equipment subsystems.

A product of the joint venture between Dana Incorporated and Bosch Rexroth, HVTs from Dana Rexroth significantly reduce fuel consumption by decreasing engine speeds throughout the duty cycle and also at idle, when speeds can drop to as low as 600 rpm. Application analysis demonstrates the possibility of further savings without compromising performance through engine downsizing.

The HVT system designed by Dana Rexroth helps reduce complexity for equipment manufacturers, since the entire system of gears, clutches, and hydrostatic units is managed by an advanced electronic control unit and optimized for efficiency by a single supplier.