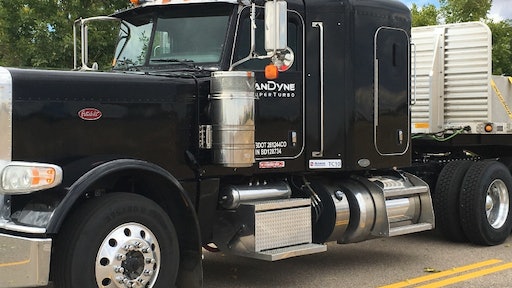 The VanDyne and Allison demonstration truck will be put through various tests to validate the efficiency benefits of their system.
VanDyne SuperTurbo Inc.

To help mitigate these performance issues, the companies determined it necessary to take a system-based approach instead of looking at each technology individually.

Thomas Waldron, Executive Vice President, VanDyne SuperTurbo Inc., says an integrated powertrain system is required to achieve the desired effects of downspeeding, and that to enforce it, the transmission needs to be in play.

Ellabarger says the Allison TC10 is an inherently efficient device as it combines the company’s torque converter technology with a unique twin countershaft gear scheme to provide full power shifts and cruising fuel economy for greater productivity and efficiency. To enhance these benefits even further for the project, Allison will apply a new control strategy which will incorporate predictive shifting.

With the addition of the VanDyne SuperTurbo (aka the turbocharger) to the system, the engine will be more responsive, as well. This is due to the SuperTurbo’s ability to act as a supercharger through transients by using a combination of turbine and engine power to allow faster rises in engine torque while minimizing the need to run higher engine rpm. “The ability of the TC10 to power shift in conjunction with the ability of the VanDyne SuperTurbo to quickly increase engine torque maintains the performance capabilities expected by drivers,” he says.

Waldron notes that the SuperTurbo being able to provide a boost in engine power is beneficial to overcoming the performance issues often associated with downspeeding. “When you’re trying to maintain and run at downspeed, there are always some issues,” he says. “There are performance problems that [occur] if you’re limiting the rpm the engine is allowed to run, and in order to compensate for that you need to run fast, efficient transients which the SuperTurbo specializes in.”

VanDyne’s turbocharger features a high speed planetary which Waldron says significantly reduces the speed of the turbocharger. Doing so enables a variable device, such as a CVT (continuously variable transmission), to be applied to control the overall ratio in speed between the engine and the turbocharger. “It allows you to effectively control the amount of air flow and boost pressure to the engine precisely, and it allows you to adjust it as an extra lever inside of the entire system tuning,” he explains.

If a sudden increase in power output is required from the engine, such as for vehicle acceleration when approaching an incline, the SuperTurbo provides the quick transient response necessary by acting as a supercharger, using both turbine and engine power to increase engine torque without increasing rpm.

The SuperTurbo is able to provide a boost of extra torque when necessary to keep the engine in a downspeed condition.VanDyne SuperTurbo Inc.

The turbocharger knows when to do this because of the communication between it and the transmission. In a traditional powertrain, when approaching an incline the transmission will automatically downshift and engine rpm will increase to make the climb. But with the Allison and VanDyne system, the transmission can inform the SuperTurbo when it’s time to provide the extra torque necessary to make the climb while maintaining the engine downspeed condition.

Waldron says the SuperTurbo can also act as a turbocompounder. The device’s turbine is capable of collecting excess power, such as when in a highway cruise condition. Once the SuperTurbo’s turbine begins collecting more energy than its compressor needs, a torque reversal occurs within the device turning it into a turbocompounder which can now provide power back to the engine.

Putting the system to the test

While the first 9 months of the project was spent on system modeling, Waldron says the vehicle in which the Allison and VanDyne system is being tested is now fully operational. VanDyne supplied the truck itself and turbocharger, while Allison supplied the transmission and did the full vehicle retrofit, including changing final drive axle ratios to meet the downspeeding requirements of the project.

The goal is to achieve a downspeed to around 1,000-1,200 rpm which is generally a heavy-duty diesel engine’s most efficient operating point. In addition to the transmission and turbocharger working together to maintain these speed parameters, VanDyne says the closer spaced gear ratios of Allison’s TC10 is also beneficial to maintaining the lower rpm range.

“The real key is getting efficiency from the downspeed and having no performance penalty,” says Waldron. “In fact, the goal is observed increased performance with the efficiency gain all at once.”

The demonstration truck is currently in its testing environment; it will first go through transient acceleration runs followed by steady state highway cruise testing.

Jared Brown, Engineer at VanDyne SuperTurbo Inc., says some full acceleration tests have been done with the new system and shown faster acceleration than a traditional truck configuration while maintaining a lower engine speed. “That’s what we want to see, and initial tests show we’re going in the right direction,” he says.

Waldron notes that vehicle testing is not always easy as there are a lot of factors involved such as fluctuations in temperature, varying road and traffic patterns, and wind conditions. To compensate for these, he says it’s important to build a large data set to test against, which the companies are in the process of compiling. At the time of printing, the companies were moving into drive cycle testing, as well.

Ellabarger says that as vehicle testing of the system begins to produce results which meet or exceed initial simulation models, future testing may involve other Allison fully automatic transmission models paired with the SuperTurbo. Additionally, as testing progresses he says Allison will provide updated transmission calibrations such as its FuelSense 2.0 technology to further optimize the engine and overall system.

By working together on the project, each company brings its individual expertise to the table in order to create the best system possible. “The benefit of both companies working together is to extend and enhance the separate component benefits by providing an optimized total vehicle system solution,” says Ellabarger.

“A lot of it is an exercise in controls and logic,” Waldron says. “The SuperTurbo is a variable device we can set to run different air/fuel ratios and perform with shifts in the transmission. It requires both companies to really optimize the system.”

Once the companies have completed more testing and have proof of the efficiency and performance benefits their system can offer, the next step will be to work directly with truck OEMs to integrate the technology. “We want to make sure our system is proven and optimized, and then we can approach the OEMs toward their uptake of it,” says Waldron.