Allison’s 3040 MX cross-drive transmission has been chosen by both manufacturers competing for the Army’s new Mobile Protected Firepower vehicle. 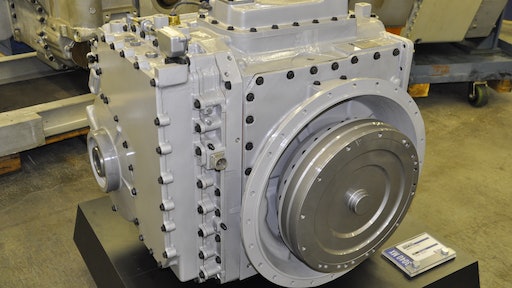 Allison's 3040 MX cross-drive transmission has been selected by both manufacturers competing in the U.S. Army's MPF program.
Allison Transmission

Allison Transmission is an active participant in the U.S. Army’s combat vehicle modernization plan, including the Mobile Protected Firepower (MPF) program. The two vehicle manufacturers selected to compete for the MPF contract have selected Allison’s 3040 MX cross-drive transmission for their vehicles. The Army intends to procure more than 500 MPF vehicles over the next 10 years.

The MPF is a new armored light tank designed to increase the combat power of the Army’s light brigades. Unlike the Army’s armored brigades, the service’s infantry brigades lack the ability to defeat enemy tracked combat vehicles, fortified bunkers and other armor threats. MPF provides these light brigades with the mobility and firepower capability needed to defeat current and future threats. The MPF program is one of the Army’s highest priority signature modernization initiatives.

The Army is poised to begin evaluating MPF prototypes from each competitor this winter and will make a final selection of one vehicle manufacturer to produce MPF in the summer of 2022. Both MPF candidates rely on Allison’s proven 3040 MX cross-drive transmission, designed for medium-tracked combat vehicles, and provide power, steering and braking of the MPF vehicle. The 3040 MX is an updated variant of Allison’s X300 transmission that has powered combat vehicles worldwide for decades.

“We appreciate the opportunity to provide the propulsion systems for the critically important MPF program for the United States Army,” says Dana Pittard, Vice President for Defense Programs at Allison Transmission. “As we continue to support the military’s critical missions through our world-class fully automatic transmissions, Allison is also collaborating with international customers in the Middle East, Asia and Europe to meet their transmission requirements for medium weight armored vehicles.”

Allison works with OEMs around the world to design, develop, manufacture and support transmissions that deliver in the toughest conditions. For fleets that are developing new wheeled or tracked vehicles, Allison can tailor a transmission specifically for that application. Allison engineers and manufactures reliable and fully customizable propulsion solutions, so customers experience reduced downtime and increased ability to accomplish critical objectives.