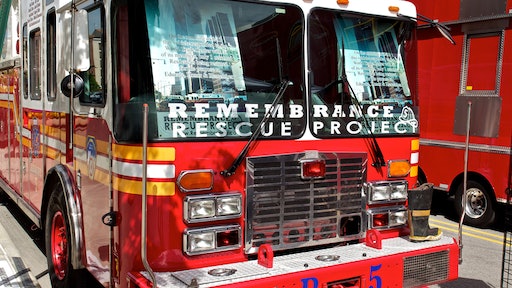 On September 11, 2001, nine firefighters with the Fire Department, City of New York (FDNY) Rescue 4 unit and 11 firefighters with the Rescue 5 unit lost their lives trying to save others at the World Trade Center complex. Today, thanks to efforts by the Remembrance Rescue Project and the Commercial Vehicle Tire business unit of Continental Tire the Americas, LLC (Continental), two rescue trucks used by these units on 9/11 are restored and touring the country as teaching tools and mobile memorials.

In July 2011, a group of firefighters purchased FDNY Rescue 4, which lost its entire crew on 9/11, but survived the 9/11 events intact and was temporarily the only rescue unit in service in the City of New York immediately following the attacks. The firefighters formed the Remembrance Rescue Project in order to restore, preserve and operate the rescues in order to facilitate education sessions, memorials and remembrance events, says Project leader Chris Gantz. The organization completed a restoration of Rescue 4 in September 2011 and then acquired the last of the surviving FDNY rescues, Rescue 5, in December 2011.

During the restoration process, it became apparent that both rescues were in need of new tires to stand up to the demands of the touring schedule. Continental provided a new set of HTR2 (all position, steer) and HDR1 (drive) tires for each rescue to get them back on the road, says Clif Armstrong, Continental’s director of commercial vehicle tire marketing – the Americas. Final restoration of Rescue 5 was completed in April 2012 with tire installation provided by Pomp’s Tire Service in Chicago. Rescue 4’s tire installation was provided in April by the City of New Smyrna Beach, FL. Today, Rescue 4 and Rescue 5 are currently the only FDNY fire apparatus that served during the 9/11 attacks that are operating outside New York City, Gantz says.

“We’d like to thank Continental for their support of the Remembrance Rescue Project. Through their support and the gift of new tires for Rescue 4 and 5, we can continue our mission to preserve these artifacts from one of the key events in modern American history, and facilitate educational sessions, memorials and remembrance events for 9/11. We are also expanding our mission to provide support programs and assistance to families of fallen firefighters,” Gantz says.

“Continental is pleased that through our tire donation to the Remembrance Rescue Project, we can help keep these engines travelling continuously throughout the U.S. as a unique living history experience. It is our honor to ensure these rescues are kept as a memorial to all those lost on 9/11, and to help the project with their efforts to develop support programs for families of firefighters killed in the line of duty,” Armstrong says.

Gantz says Rescue 5 will continue to be operated out of the Remembrance Rescue Project’s facility in Chicago and travel throughout the eastern half of the U.S., while Rescue 4 will operate from a Colorado base for the western half of the country. Firefighters volunteer their time to operate the project around the country, and coordinate the educational events and appearances with host fire departments for local schools and community events. The engines have appeared at sporting events such as the Capital One Bowl and the NASCAR Sprint Cup Series’ 2012 Bojangles Southern 500 at Darlington Raceway. Upcoming appearances include various fire rescue events and a stop at the NASCAR Sprint Cup Series at the Glen, August 9 to 12 at Watkins Glen, NY. A schedule is available at the project website at http://remembrance.co.

According to the Remembrance Rescue Project, FDNY Rescue Companies such as Rescue 4 and 5 are considered the most elite companies within the FDNY community for special, technical, confined space and high angle rescue. The companies are also responsible for search and rescue, scuba and hazardous materials operations.