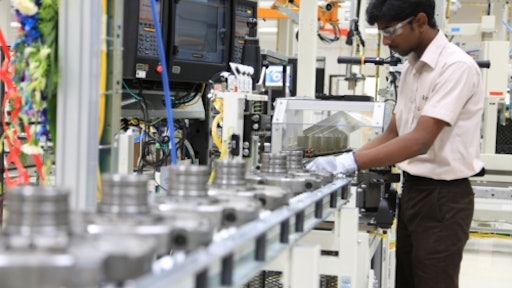 Allison Transmission, the world's largest manufacturer of fully-automatic transmissions for medium- and heavy-duty commercial vehicles and hybrid-propulsion systems for city buses, has announced its Chennai, India manufacturing facility is now producing the Allison 1000 and 2000 Series transmissions.

Over 1 million of these highly-reliable and durable transmissions have been manufactured at Allison's Indianapolis, IN, campus since 1999. Co-production capabilities of the 1000 and 2000 Series transmissions at the Chennai plant and in Indianapolis help Allison expand its global footprint as well as its presence in India.

"Our growth outside North America will be facilitated by our established relationships with OEMs worldwide, and operations such as our Chennai multi-purpose facility," says Lawrence E. Dewey, Chairman, President and CEO of Allison Transmission. "Markets outside North America represent a growth opportunity for Allison where we are strengthening our presence and we believe opportunities for increased market share exist."

Allison Transmission's multi-purpose Chennai operation has been manufacturing high-quality precision vehicular drivetrain components for nearly two years and has served as a transmission Customization Center for almost a year. Allison Customization Centers around the world configure transmissions to a specific OEM's requirements prior to delivery which reduces assembly costs and shortens vehicle build times.

Over a two-year period, the Chennai facility earned the right to produce the Allison 1000 and 2000 Series transmissions by demonstrating the ability to meet Allison's global best-in-class manufacturing practices. During this timeframe, the Chennai plant was also awarded two of India's most prestigious Golden Peacock National Awards (GPNA); the first one in 2011 for Occupational Health and Safety and the second GPNA in 2012 for Total Quality in the Automotive Sector.