Addressing engine downspeeding as a way to create a more efficient engine. 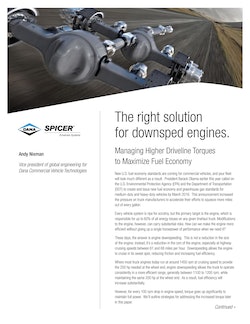 New U.S. fuel economy standards are coming for commercial vehicles, and your fleet will look much different as a result. How can we make the engine more efficient without giving up a single horsepower of performance when we need it?

These days, the answer is engine downspeeding.

Where most truck engines today run at around 1450 rpm at cruising speed to provide the 200 hp needed at the wheel end, engine downspeeding allows the truck to operate consistently in a more efficient range, generally between 1100 to 1200 rpm, while maintaining the same 200 hp at the wheel end. As a result, fuel efficiency will increase substantially.

However, for every 100 rpm drop in engine speed, torque goes up significantly to maintain full power. We’ll outline strategies for addressing the increased torque later in this paper.