Stack up the Savings

Pairing energy recovery technology with a diesel-engine generator enables the use of an electric hybrid system that achieves fuel savings and emissions reductions in ports. 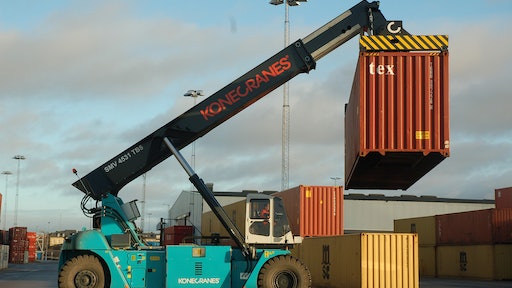 Konecranes introduced its 45-T capacity hybrid reach stacker, the SMV 4531 TB5 HLT, in 2013 in an effort to provide customers with a machine that would help reduce fuel use, emissions and operational costs. The reach stacker is powered by its supercapacitor-based energy storage system and an 8-liter diesel engine. “Konecranes has vast experience developing, manufacturing and maintaining electric machinery of a similar power class, [making] an electric reach stacker an obvious choice,” says Anders Nilsson, Technical Director at Konecranes.

In addition, he notes that electric hybrid was a promising option for the reach stacker because of the numerous energy recovery opportunities available with these machines due to all of the lifting and lowering movements they make. “Hybridization…promised great [energy] saving potential in our initial feasibility study,” Nilsson says.

Energy recovery is where it’s at

The reach stacker features a full-electric series hybrid drivetrain. Hybridization was chosen because Nilsson says the maturity and cost of on-board electric energy carriers—such as batteries or fuel cells—are not quite “there yet.” However, these technologies can be incorporated later on, with very few changes needed to the machine, as they become more feasible.

As the machine lifts and lowers payloads, energy that might otherwise be lost is recovered and stored in the supercapacitor-based energy storage system. The system is also capable of recovering energy from braking events, and distributes it as needed to power various functions of the machine.

While supercapacitors are not able to absorb and store a lot of energy, they are capable of quickly releasing the energy they store which is why Konecranes chose them for its energy storage system. “Several electric energy carriers are good at storing high amounts of energy, but not that well suited in handling high power levels,” Nilsson says. This capability ensures the reach stacker can operate at its full dynamic potential when necessary. The storage system is dimensioned so that a fully laden machine can operate at top speed and lift a 45-T container to its highest stacking height (typically five containers high).

To ensure the energy storage system stays fully charged, the diesel engine is used to propel a permanent magnet generator that recharges the system and also acts as a starter motor for the diesel engine. The genset is used only when needed and engine rpm is set at a constant rate so operators cannot control engine speed with the gas pedal. This ensures optimal efficiency and fuel use is achieved at all times.

The hybrid system includes a 250 kW (335.3 hp) electric traction motor to power the reach stacker’s drive axle via a differential gear. Nilsson says regenerative braking is used as much as possible to power this motor; when in generation mode it recovers energy from braking events and feeds it into the energy storage system for later use.

Boom lifting and extension is achieved using fixed displacement piston pumps. These pumps are also used for steering, spreader functions and cooling, and are individually connected to electric permanent motors. “As all lifting hydraulic circuits are closed, return hydraulic flow will operate the hydraulic pumps in motor mode, causing the electric pump motors to operate in generator mode,” explains Nilsson. “This recovered energy is fed to the energy storage system.” All electric energy flow is converted to 800V DC and distributed to the main power consumers.

By having both stored energy and the diesel engine genset provide electrical power to the driveline and hydraulic lifting system, Nilsson says the reach stacker’s peak performance is greatly enhanced. This also results in a 75% boost equivalent to the engine’s power because the two systems working in tandem provides enhanced lifting and acceleration performance.

Hybridization has its advantages

One of the biggest benefits of the hybrid reach stacker is a 30% increase in energy efficiency, which Nilsson says translates to decreased fuel consumption. Estimated fuel consumption is 10-12 LPH (2.6-3.17 gph) during normal handling of fully loaded containers which the company says is significantly lower than the typical 18-21 LPH (4.76-5.55 gph) of a conventional reach stacker.

Productivity can be increased up to 10%, as well, with the reach stacker due to the use of electrical energy and componentry. “The characteristics of the electric drives means instant response to driver commands and superior acceleration and smoothness of operations,” says Nilsson.

Konecranes was able to employ a downsized engine in the reach stacker since it is being used as part of the hybrid powertrain. This provides further efficiency gains by reducing the amount of cooling technology that would otherwise be needed. In addition, the engine is mechanically decoupled from both the driveline and lifting hydraulics which enables it to operate at a constant rpm in order to achieve the best possible fuel efficiency. This also allows the engine to be automatically shut down when not needed, resulting in longer service life. The absence of a torque converter and gearbox on the machine also reduces and simplifies service costs.

Because the engine and the hydraulic pumps only operate when needed, there is a reduction in noise produced by the machine, benefiting both operators and others working on the job site. Engine idling is also eliminated which can be a contributing factor to unnecessary fuel use and emissions in conventional machines.

In September 2015, the hybrid reach stacker completed a year of field testing at the Port of Helsingborg in Sweden. During normal handling of fully loaded containers the reach stacker demonstrated a 30-50% savings in fuel consumption in comparison to a traditional machine. Over the course of the testing period it also reduced emissions amounting to 80 T of CO2. Operators of the machine during the field test also reported improvements in responsiveness and acceleration of the reach stacker, as well as comfort due to its smoother operation.

The company says it will continue to advance the hybrid reach stacker’s technology based on the results from this field testing and other customer input, working to further improve the productivity and energy efficiency of the machine, as well as making additional reductions in emissions and noise output.

Proterra is providing its battery technology and expertise to help Komatsu develop a battery-electric excavator.
Sara Jensen
July 6, 2021
Follow Us