Production at the new facility in Michigan is expected to begin in 2020 to meet growing demand from major international customers. 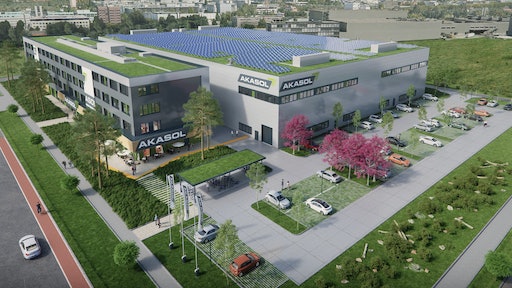 Illustration of the new AKASOL headquarters in Darmstadt.

AKASOL, one of Europe’s leading manufacturers of high-performance lithium-ion battery systems for commercial vehicles, has announced plans to open a production facility in the metro Detroit area of Michigan, USA. Opening dedicated operations in North America comes in response to specific demand for the firm’s high energy battery modules from major international manufacturers and will allow AKASOL to pursue ambitious growth plans for the region.

The State of Michigan has given its full backing to AKASOL’s plans, awarding the firm a Michigan Business Development Program grant towards the construction of the production facility. The new facility will generate considerable investment and create over 200 jobs in the next 5 years. The location of the site will also ensure that AKASOL’s customers comply with Buy America Act regulations, which dictate that they must purchase locally produced battery systems.

Commenting on AKASOL’s decision to open a production facility in the Detroit area, Jeff Mason, CEO of the Michigan Economic Development Corporation, the state’s chief marketing and business attraction arm that administers programs and performs due diligence on behalf of the Michigan Support Fund, says, “The decision by AKASOL to establish its first North American facility here underscores the strength of Michigan’s advanced manufacturing industry and robust supply chain. We welcome AKASOL’s commitment to Michigan and we look forward to working with the company for years to come as it continues to grow and create jobs here.”

Barry Matherly, President and CEO of the Detroit Regional Partnership, adds, “The Detroit Region is thrilled to have been selected by AKASOL for its first U.S. battery production facility for the commercial vehicle market. The company is a global leader in the design and manufacturing of e-mobility solutions and our team is pleased we were able to demonstrate a highly compelling business case around the strengths of the region.”

With almost 30 years’ experience in battery systems technology, AKASOL develops and manufactures high-performance lithium-ion battery systems for buses, commercial vehicles, trains, industrial vehicles and the marine sector. The German-based firm made its successful initial public offering on the Frankfurt Stock Exchange in June 2018, employs 180 people across its two sites in Darmstadt and Langen and is due to start construction of its new, significantly expanded headquarters in Darmstadt in July 2019.

AKASOL’s new Michigan production facility will have a similar capacity to the firm’s current series production site in Langen, Germany. Two thirds of its initial capacity will cater for new customers, with the remaining third dedicated to AKASOL’s existing customers. Initial production, which is due to begin in 2020, will focus on the 2nd generation AKASystem OEM PRC battery system, with high energy density battery systems following soon after. By 2021, AKASOL expects production to have increased to 400 MWh in a three-shift operation.

Roy Schulde, President of AKASOL’s U.S. subsidiary AKASOL INC., says, “Commonly referred to as the ‘Motor City’, Detroit will transform into the ‘Electric Motor City’ as transportation sectors shift towards electrification. We can’t think of a better, more historic place for our first production plant in North America. Batteries are the future of both transportation and manufacturing and we look forward to attracting world class talent from the local region to develop, test and produce our high-performance lithium-ion systems and bring them to the market for our customers.”

Sven Schulz, CEO of AKASOL, adds, “Not only will our new North American production facility enable us to meet the high demand we’re receiving from our global customers, particularly a well-known Swedish manufacturer of trucks, buses, construction and marine equipment, but it is also a core part of our international growth plans. Our unrivalled battery expertise from module to system level, coupled with the fact we are already undertaking series production for market-leading companies, means that we are well on the way to becoming the European market leader in commercial vehicle battery systems. Our new Michigan site will accelerate our business development activities with both new and existing North American customers.”