EIA study finds the majority of energy for production of metal-based durables comes from electricity and natural gas as opposed to fossil fuels used by other manufacturing industries. 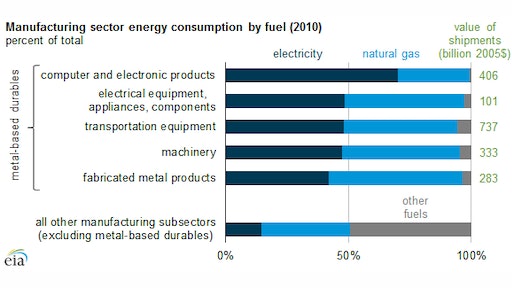 Unlike many manufacturing industries, the energy used for the production of metal-based durables (MBD) is mostly electricity and natural gas, rather than other fossil fuels (residual fuel oil, diesel, liquefied petroleum gases, natural gas liquids and coal) or renewable sources. MBD producers are therefore well-positioned to benefit from energy efficiency programs and the increased availability and lower cost of natural gas.

MBD manufacturing is typically housed in a building, and the manufacturing processes are not as energy intensive as many other industries. Direct non-process electricity use, which includes facility heating, ventilation and air-conditioning (HVAC), facility lighting and other facility support, represents 36% of MBD electricity use as compared to 14% of electricity use in other manufacturing. As a result, buildings are a particularly important part of efforts to reduce energy use in the MBD industries.

EIA's Annual Energy Outlook 2014 (AEO2014) projects that shipments for MBD industries will increase substantially from 2012 to 2040. MBD industries will benefit from the increased availability and lower cost of natural gas. These industries are expected to continue to have high levels of innovation that contribute to growth, particularly in the computers and electronic products and transportation equipment industries. MBD industries are also expected to continue to improve their international competitiveness. Given the high dependence of MBD industries on electricity, there are significant potential benefits from improved energy efficiency associated with machine drives, buildings and the reduction of losses associated with on-site electrical distribution systems.