Two years after being hit by a tornado, CLAAS' Nebraska Harvest Center has been rebuilt, and expanded, to continue serving customers in the area. 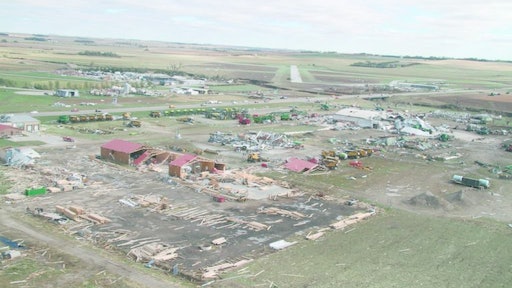 The aftermath of the 2013 tornado that hit Wayne, NE.

CLAAS of America announces that the newly rebuilt Nebraska Harvest Center is open for business, nearly two years after an F4 tornado tore through Wayne, NE. After the tornado struck, community members rallied together to rebuild the city, and among them was CLAAS of America.

“It’s been a long time coming,” says John Buse, Executive Vice President – Retail, CLAAS of America. The twister hit in October 2013, forcing Nebraska Harvest Center to react quickly on behalf of its customers. Immediately after the storm, CLAAS leapt into action to ensure that customers had access to the support needed, and they diligently worked toward a long-term solution.

“Within days we moved our service and parts operation to a farm just outside of town to support our growers who were still in the field,” says Buse. After harvest, the CLAAS dealership moved to a temporary building adjacent to its location while work began to rebuild the property that had been destroyed.

“We not only re-built, we expanded,” notes Paul Westbrook, Complex Manager for the Seward and Wayne locations of Nebraska Harvest Center. “The new dealership has an additional 4,800 square feet of shop space, a better space for spare parts, and a conference room above our offices.

“With our new dealership in Wayne, we have the structure in place to serve our current customers as well as those who are just now getting to know our dealership and the excellent CLAAS equipment we support.”

Even though the tornado resulted in extensive damage, CLAAS combined its available resources and drive to rebuild and support the community and quickly find a solution to ensure that the Nebraska Harvest Center stayed in Wayne.

“We’re very proud to be a part of rebuilding the community,” says Buse. “Moving into our new, larger facility will allow us to continue to grow our business and provide the after-sales support our customers in this area deserve… we are happy to have rebuilt our facility in the great community of Wayne.”

Nebraska Harvest Center carries all CLAAS equipment lines, including LEXION combines, JAGUAR forage harvesters, XERION tractors and CLAAS balers and hay tools. LEXION combines, which are built in Omaha, were originally introduced in the North American market under the Caterpillar name. The distinctive yellow and black combines still carry the “CAT” color, but are now being marketed with the CLAAS badge on the side.