Wirtgen will premiere its SP 64i slipform paver and TCM 180i curing unit during bauma 2016. 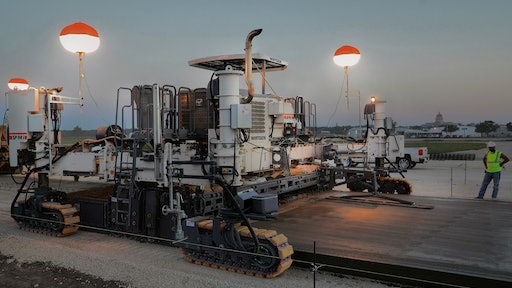 With two world firsts – the slipform paver SP 64i and the curing unit TCM 180i – as well as the SP 94i, Wirtgen is presenting the latest developments for high-quality concrete paving at bauma 2016.

Wide variety and high quality are the watchwords, for both inset and offset operation. Thanks to sophisticated technologies, Wirtgen slipform pavers can tackle almost any conceivable structural form, including special shapes.

Inset slipform pavers are ideal for the cost-efficient production of large concrete pavements, for instance on highly resilient motorways and runways. Due to an extensive product range, these mobile concrete factories from Wirtgen can pave roads and areas up to 18.0 m wide between their crawler tracks.

The new SP 90 Series comprises the SP 92i and the SP 94i, a completely modular inset version with four steered and pivotable crawler tracks. It can produce concrete pavements between 3.5 and 9.5 m wide and up to 450 mm thick with great precision. Numerous options, such as the dowel bar inserter (DBI), tie bar and side tie bar inserter, as well as different slipform systems tailored to the regional requirements for inset applications worldwide, allow the SP 94i to be configured for a whole range of applications. Like the SP 92i, it stands out through the high accuracy of its paving, its intuitive operation and highly convenient operation.

Together with the models SP 61i and SP 62i, the SP 64i makes up the new SP 60 Series which is set to replace the slipform paver SP 500 in future. With a power output of 180 kW in accordance with emission level EU Stage IV/US Tier 4 Final (155 kW in accordance with emission level EU Stage IIIA/US Tier 3), the SP 64i can optionally be equipped with four hydraulically moved swivel arms. As a result, the machine can switch from transport mode to working mode more rapidly than the SP 500. What's more, in combination with the optional Paving Plus package, the swivel arms can actively circumnavigate obstacles during the paving process.

A walkway which now extends across the full width of the machine, a standardized operating concept comprising a central control system and four additional local control systems as standard: These new features add up to a machine that is both simple and flexible to operate. Among other things, remote controls can be connected to each of the crawler tracks to simplify and speed up the set up of the slipform paver, a process which involves the positioning and zeroing the crawlers and swivel arms, for instance. Standardized interfaces and a bus system ensure a high degree of flexibility when it comes to optional upgrading or conversion of the machine. The addition of further machine components to cater to complex, customer-specific job requirements is a simple process, enabling the SP 60 Series to handle a wide variety of applications. As with the SP 94i and SP 92i and in keeping with the modular principle, customers can choose between different slipform systems for inset paving. In principle, the slipforms can then even be used for the SP 90 Series. Offset slipforms can also be used; these are supplied with a variety of typical offset options, such as trimmers, different conveyor belts or augers to feed the offset slipform.

Inset slipforming allows the SP 64i (four crawlers on swivel arms) and SP 62i (track steering) to pave widths up to 6.0 m and thicknesses up to 350 mm in the standard version; thicker concrete surfaces can also paved at the customer's request. Even widths up to 7.5 m are possible when the machine is equipped with electric vibrators (without DBI).

In the offset process, the SP 60 series can slipform large or small concrete profiles to the left or right of the machine with the three- or four-crawler version of the SP 61i. Whether standard or customized forms are called for, the Wirtgen portfolio offers an immense variety of slipforms tailored to the applications and customers' requirements. Be it roadway edging, concrete safety barriers, water gulleys or narrow paths: Contours of almost any shape or size can be produced cost-efficiently and in a high quality. This makes the slipform paver a highly versatile all-rounder.

Both the SP 90 and the SP 60 Series stand out not only through their large variety of uses, but also through their high cost-efficiency and productivity, not to mention their numerous useful functions. Thanks to the completely modular design, contractors are sure to find the right solution for any inset and offset applications. What's more, this modular design also makes transport a great deal easier.

Other features, such as the Eco Mode engine management system, which adapts engine output to the requirements of the job, and the 3D interface Easy Connect, ensure a high degree of application security for the customer, as well as cost-efficient and precise concrete paving to the highest quality standards.

Self-propelled curing units, such as the new TCM 180i from Wirtgen which is being premièred at bauma 2016, guarantee the success of professionally cured concrete pavements. As soon as concrete has been paved by the slipform paver, it must be protected without delay to prevent drying out, as this causes tension which, in turn, leads to cracks. When paving concrete, the curing unit, with its automatic spraying and brooming system, follows directly behind the slipform paver to produce the desired surface texture. Finally, the spraying system applies a dispersion to the fresh concrete surfacing to prevent it drying out prematurely.

The TCM 180i, the latest curing unit, further improves the pavement quality achieved with Wirtgen products. The modular design permits working widths between 4 m and 18 m. A new engine unit means that the TCM 180i now has the most eco-friendly engine technology in compliance with emission level EU Stage 4 / US Tier 4 Final. The engine can also be equipped with an additional diesel particulate filter (DPF). With its new operating concept, the curing unit can now be operated intuitively, just like the Wirtgen slipform pavers of the SP 90 and SP 60 series. In addition to a more modern and clearer arrangement, the operator's console also features a number of new service and control functions, optimizing the work process. The new hydraulic concept also has a positive impact on the work process, for the traction drive can now be switched at different speeds (between working and transport mode), for example. Proportional control supports precision height adjustment to meet every requirement.

Wirtgen has additionally enlarged its range of different surface textures to cater to the diverse wishes of its customers around the world. In addition to the established functions of transverse brooming and spraying, longitudinal brooming and spraying – and even the application of a diagonal finish – will be possible in future. The machine can also be fitted with mounts for a burlap or synthetic turf.