The Dept. of Energy is providing $40 Million in funding for projects aimed at enabling affordable and reliable large-scale hydrogen generation, transport, storage, and utilization in multiple sectors.

The U.S. Department of Energy (DOE) announces approximately $40 million in FY 2019 funding for 29 projects to advance the H2@Scale concept. The focus of H2@Scale is to enable affordable and reliable large-scale hydrogen generation, transport, storage, and utilization in the United States across multiple sectors. Funded through the DOE’s Office of Energy Efficiency and Renewable Energy (EERE), with contribution from DOE's Office of Nuclear Energy, the selected projects will advance hydrogen storage and infrastructure technologies and identify innovative concepts for hydrogen production and utilization including grid resiliency.

“The H2@Scale concept is a critical piece of the country’s comprehensive energy strategy and an enabler of multiple industries in our economy,” says U.S. Secretary of Energy Rick Perry. “As an energy carrier, hydrogen has the potential to unite our nation’s domestic energy resources. These selections support DOE’s mission and advances our commitment to enable economic growth and energy security through the development of more affordable hydrogen technologies.”

The United States produces over 10 million tonnes of hydrogen, nearly one-seventh of the global supply, primarily for oil refining and fertilizer production. Hydrogen infrastructure includes over 1,600 miles of hydrogen pipeline, a growing network of stations, and thousands of tons of storage in underground caverns. Increasing the production, transport, storage, and utilization of hydrogen from today’s baseline can represent an opportunity across various sectors in the economy. For example, producing hydrogen when generation exceeds load on the grid can reduce curtailment of renewables and optimize existing baseload assets, such as nuclear. The hydrogen can be stored, distributed, and/or used as a fuel for transportation, stationary power, process or building heat, and industrial and manufacturing sectors (such as steel manufacturing), creating an additional revenue stream and increased economic value. One of the challenges is to make technologies to produce, deliver, store, and utilize hydrogen affordably enough to become mainstream. The selections announced today will help address this challenge. 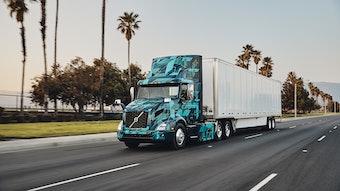 States Band Together to Bring Electric Trucks to Roadways

California and 14 other states have put in place rulings that will accelerate market adoption of zero-emission trucks.
Sara Jensen
August 4, 2020

Advancements in Battery Systems are Increasing

Continued developments in battery technology are bringing about higher power capabilities and additional use cases in the heavy equipment industry.
Sara Jensen
July 21, 2020

Not only do we supply robust and reliable off-road engines that are characterized by premium product quality, we support projects all the way throughout the lifetime of the machines – from design right through to installation and superior service support.
August 1, 2020
Latest

The partnership will enable the companies to supply, distribute and service diesel fuel injection systems for on- and off-road engines
Stanadyne LLC
March 11, 2020

The new funding investment for the DOE's H2@Scale initiative will support R&D to expand production, storage and use of hydrogen.
January 28, 2020

Not only do we supply robust and reliable off-road engines that are characterized by premium product quality, we support projects all the way throughout the lifetime of the machines – from design right through to installation and superior service support.
August 1, 2020
Fuels & Fluids

NREL researchers have found an oxygenate molecule capable of being produced from biomass which could improve diesel fuel performance and reduce emissions.
Sara Jensen
December 17, 2019

Anglo American is partnering with ENGIE to convert a mine haul truck to hydrogen power as part of its sustainability efforts.
OEM Off-Highway Editorial Staff
October 14, 2019
Fuel Tanks & Systems