IDTechEx has released a new report which examines the benefits e-fuels can provide over other alternative fuel options. 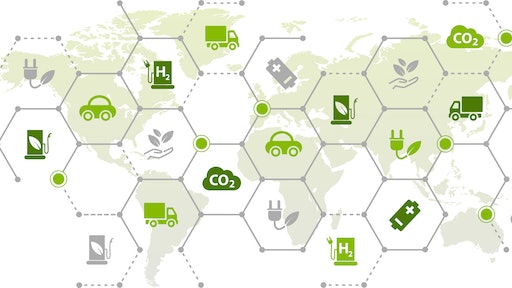 Today many biofuels are produced by blending bioethanol and biodiesel, and commonly use food crops as a major feedstock. IDTechEx says that in the long term, more advanced feedstocks from cellulosic or woody feedstocks, or from waste materials, could be used to help prevent competition with food production and limit land use. Current methods also have some emissions associated with them, which future methods will look to overcome.

IDTechEx says a possible alternative to biofuels could be electro-fuels (also called e-fuels or synthetic e-fuels). They are produced by storing electrical energy, preferably derived from a renewable source, in the chemical bonds of liquid or gas fuels. Often the term power-to-X, with X being a gaseous or liquid product, is used when describing these fuels. IDTechEx notes hydrogen itself can be considered an e-fuel, as well as methane and ammonia.

Bosch is one of many companies currently researching the use of synthetic fuels as it believes they offer many benefits. Among them is the fact these types of fuels can be made today with existing technology. And when made from renewable sources they can provide a climate-neutral fuel option.

According to IDTechEx, there are various methods that can be used to produce e-fuels, many of which rely on syngas—often a combination of hydrogen and carbon monoxide, though other methods also exist. Creation of these fuels from hydrogen could ease their transport and storage, as well as their ability to be used as a drop-in replacement for current fossil fuels.

Rolls-Royce Power Systems is currently investigating the production of hydrogen and methane from renewable sources using the power-to-x process. The company notes methane produced from power-to-gas processes offer a good alternative because the production process is less complex than some other power-to-X options and delivers a high level of efficiency which improves production costs. Like Bosch, it sees many benefits to using e-fuels as part of the future mix of power alternatives for mobile applications.

The energy costs and additional steps associated with developing e-fuels is one of the challenges IDTechEx notes in its new research. This could result in high capital costs and inefficient use of input energy compared to other power source options. However, companies like Bosh also believe these costs will come down in time as production increases and research into the fuels expands.

IDTechEx believes electrolyzer technology will need to advance further to aid improvements in cost and time associated with producing e-fuels.

In general, the research firm believes e-fuels offer a possible fuel alternative for various industries—particularly those in which electrification or other power alternatives are not yet an option—but there are still much research and development necessary. The positive benefits the fuels can provide in helping reduce carbon emissions is likely to ensure development efforts will continue to progress, concludes IDTechEx.