HydraForce co-founder and board member Dick Fontecchio has passed away at the age of 66.

It is with great sorrow that HydraForce reports its co-founder and board member, Dick Fontecchio, passed away on Monday, September 8, 2014, at JourneyCare in Woodstock, IL. He was born January 17, 1948 in Ironwood, MI. He is survived by his wife, Carol, and daughter, Andrea. He was preceded in death by his son, Mark.

Dick began his work in the fluid power industry as an intern in 1965. Dick graduated from Elmhurst College with a B.A. and earned his M.B.A. from Lake Forest College. In 1985, he co-founded HydraForce with Jim Brizzolara in Northbrook, IL. Since its establishment, HydraForce has grown into the largest private manufacturer of hydraulic cartridge valves with 1,100 employees and more than 430,000 sq. ft. of manufacturing space and operations in the United States, England, Germany, China, Italy, India, France, Brazil, Korea, and Japan. The company is now headquartered in Lincolnshire, IL.

In remembering Fontecchio, Brizzolara, Co-Founder, President and CEO of HydraForce, says, “Dick was incredibly influential in the development of cartridge valve technology. During his tenure as our Vice President of Sales and Marketing, he presided over the release of some 15,000 proprietary and standard valves and electro-hydraulic controls.”

He continues, “I first met Dick in the spring of 1965 when I hired him as a summer intern following his junior year at Wheeling High School. Years later, while discussing the state of the industry one evening, Dick mentioned his dissatisfaction with the current level of quality and customer service being offered throughout the industry. At the end of the night, Dick declared, ‘We should start our own company and run it the right way.’ Thus HydraForce was conceived and the rest is history. Dick was instrumental in crafting HydraForce’s culture of creativity and exceptional customer service, his direction and wisdom will be sorely missed. On behalf of the 1,100 employees of HydraForce, we extend our gratitude for the opportunities Dick helped create and extend our deepest sympathy to his family. May this very brilliant and influential man in all our lives rest in peace.”

In lieu of flowers, memorials in Richard’s name may be made to the American Cancer Society or JourneyCare Foundation, 405 Lake Zurich Rd, Barrington IL 60010. 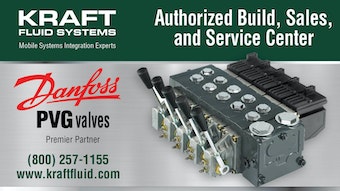 Danfoss PVG proportional valves are designed for demanding equipment tasks. KFS has been an authorized build, sales, and service center for 30 years.
July 1, 2021

The Gates MXT-XTP hydraulic hose is suitable for a broad array of industries and applications, including construction and mining, material handling and more.
Gates Corporation
May 2, 2021

The digital hydraulic actuator allows the creation of new hydraulic systems which can improve performance and efficiency of construction equipment.
Sara Jensen
April 21, 2021
Follow Us