Manufacturers and customers voiced economic optimism during CONEXPO 2017 which saw a 16% increase in buyer attendance. 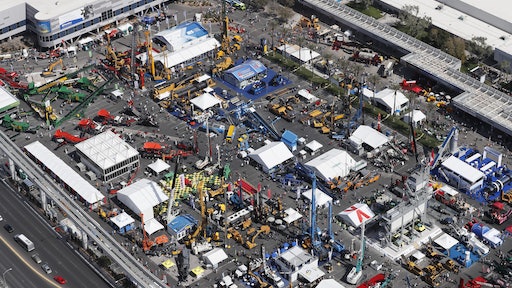 CONEXPO-CON/AGG and IFPE 2017 attendees came to Las Vegas ready to buy as exhibitors said they had enjoyed tremendous sales activity throughout the week.

“This has been one of the best editions of CONEXPO-CON/AGG – ever,” says Rich Goldsbury, 2017 CONEXPO-CON/AGG chair and CEO and President Doosan Bobcat North America & Oceania. “Exhibitors are writing sales at an incredible pace, and attendees clearly came to Las Vegas to buy.”

"There was an element of confidence and pent-up demand at the show," says Dave Foster, Vice President for Marketing & Corporate Communications at Volvo CE. "These are not tire-kickers. These are people who are willing to buy multiple machines for work they have now and anticipated growth based on a renewed confidence in the market."

A series of key metrics reflected the improved conditions, which were bolstered by a new pricing strategy intended to reinforce the overall quality of CONEXPO-CON/AGG and IFPE 2017 attendees.

“I think there is a noticeable difference in the attendees at this show, and the difference is their optimism,” says Gradall Industries President and 2017 Association of Equipment Manufacturers (AEM) Chair Michael Haberman. “Optimism was on display throughout the show, and the traffic was excellent.”

At the same time, the technological change revolutionizing these industries was pervasive across the shows’ record 2.8 million-plus net sq. ft. of exhibits featuring a record 2800-plus exhibitors from the leading U.S. and global manufacturers, from multinational giants to small firms with specialized products.

The world’s first 3D-printed excavator, the brand-new Tech Experience and a stellar education lineup anchored a forward-looking vision for construction and infrastructure on display at CONEXPO-CON/AGG and IFPE 2017.

Ease of operation was a key element for the new John Deere 700L and 750L dozers which include a new operator station and smart grade capabilities.
John Deere Worldwide Construction & Forestry Div.
April 6, 2020

The company is expanding its Cat Command to include remote control and semi-autonomous operation.
Caterpillar Inc.
March 23, 2020
Follow Us