German Construction Equipment Industry in the Middle of a Boom

VDMA reports the German construction industry ended 2017 on a high note with incoming orders up 19%, and 2018 is expected to see an 8% increase in turnover. 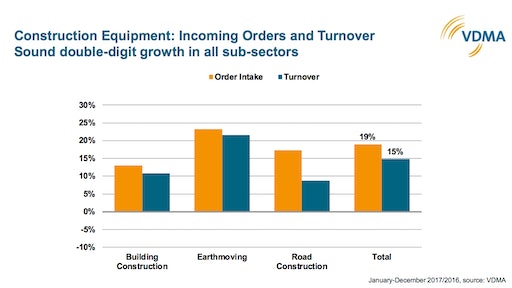 The German construction equipment industry ended 2017 with turnover of 10.8 billion euros – an increase of 15% compared to the previous year. It is the fourth consecutive year of growth for the sector. Incoming orders were 19% higher by the end of the year. 2018 is therefore expected to be another good year, with the industry predicting an 8% increase in turnover.

Boom should continue into 2019

“We have not felt this kind of unanimous, great optimism for many years,” comments Joachim Strobel, Managing Director of Liebherr-EMtec GmbH and Industry Spokesman of the German construction equipment manufacturers of VDMA on the positive atmosphere among his colleagues at their annual meeting in Frankfurt. The companies generated considerable growth in all subsegments in 2017, with the largest increase coming in earth-moving equipment (up 21%), followed by building equipment (up 11%) and road construction machinery (up 9%). “We are benefiting from simultaneous high demand around the globe,” adds Franz-Josef Paus, Chairman of the Construction Equipment and Plant Engineering Association of VDMA and Managing Partner of Hermann Paus Maschinenfabrik GmbH. There are no signs that this will change this year. “The boom will carry us into 2019.” This is also why the manufacturers are looking forward to bauma, the the world’s leading trade fair for the sector that will take place in Munich in April of next year.

German market and Europe are the drivers

The German market was the driving force behind 2017’s positive developments. Here, the manufacturers were able to add another 3% to an already high level of sales. “This scale was surprising,” says Strobel. The compact machines segment was the main reason this growth was not larger. After soaring over the past 2 years, it is clearly starting to become saturated, with single-digit negative growth. About 20% more construction machines were sold in Europe last year than in 2016. Construction equipment sales reached record levels in Northern and Western Europe, while demand in Southern and Central Europe rose considerably, albeit from a low starting point. Russia continues to cause the manufacturers some concern, despite the recent recovery. In the once booming market, German manufacturers are not yet back to where they once were. “We are finding it difficult to rebuild the trust that was lost through the EU sanctions,” explains Strobel.

China once again the largest construction machinery market in the world

The worldwide sector turnover grew by around 15% in 2017, almost reaching 2011 levels again at about 116 billion euros. As of yet, the growth shows no signs of a bubble. Customers in all subsegments are working to capacity, the capital is there, the situation on the raw materials markets is improving and businesses are profiting from a macroeconomic tailwind. Markets appear to be opening up one after the other. With a sales upturn in double digits in construction machinery, North America was nearing its record figures from 2006 at the end of 2017. In South America, the manufacturers recorded a sales upturn of 26%. This was brought on not by Brazil, but by Chile, Peru and Argentina. Argentina in particular is a market with great potential and deserves closer attention, according to the manufacturers. The Near and Middle East was the only region in which the sector once again recorded negative growth, albeit with a considerable improvement during the second half of the year. The Indian market grew for the second year in a row, by 12%, but remains small compared to China. After 5 years of sometimes extreme downturns, the Chinese market positively exploded in 2017 (up 86%) and is now the largest construction machinery market on Earth once again. However, despite apparent market consolidations, China remains highly volatile and lacks the desired sustainability.

According to the Ifo-Konjunturtest, the capacity utilization of the German manufacturers of construction machinery and building material plants was at 89% in early 2018. In addition to materials shortages, or as Paus says, “the fight for daily material”, staff shortages will also be a limiting factor in 2018. Long delivery times from component suppliers are the downside of the high number of orders in many subsegments. However, the industry representatives do see positive aspects to this limitation. Among other things, it promises slower and healthier upward development than has been seen in the past.

Finding qualified staff in this unusual boom phase is the second major challenge facing the industry. There is not only a lack of engineers and technicians, but also of people who can operate construction machinery. With 40,000 employees, the mainly medium-sized businesses in the construction and building material plant industry play an important part in securing industrial jobs in Germany. They provide a professional home for numerous people with a huge range of qualifications and do so with practically no precarious employment conditions. The manufacturers believe it should stay that way. “Flexibility is essential on all sides, however,” emphasizes Paus. “In the next 1 or 2 years, business will be good and the employees will benefit from that.” However, the industry will need to be able to deal with whatever comes next, including the next depression. Flexibility and the right tools have helped secure jobs in the past.