A scalable planetary drive transmission features a simpler design, lower manufacturing costs and an improved ride, among other benefits to overall vehicle performance. 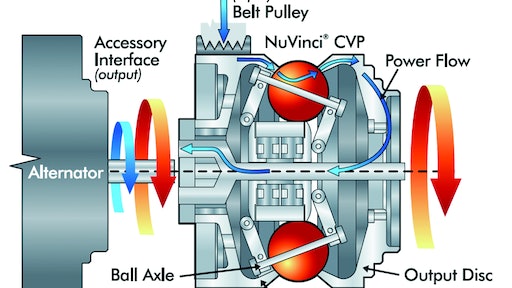 It is not uncommon for a technology to be versatile. It is perhaps one of the greatest strengths to be functional across a variety of system applications and vehicle platforms. The NuVinci patented continuously variable planetary (CVP) transmission from Fallbrook Technologies Inc., San Diego, CA, hits markets ranging from commercial trucks to bicycles to wind turbines.

The NuVinci technology is a scalable and adaptable CVP technology that controls the relationships of speed and torque through a system of rotating and tilting balls (made of basic bearing steel) between the input and output components of a transmission. The tilting of the balls changes the contact diameters and varies the speed ratio resulting in seamless and continuous transition to any ratio within its range. The NuVinci system, compared to other continuously variable transmissions, features fewer components, costs less to manufacture, while still improving overall vehicle performance.

Often described as the ‘Holy Grail’ of mechanical engineering, CVTs allow for an infinite number of gear ratios versus mechanical transmissions with a fixed number of gear ratios. The NuVinci CVP enables vehicle accessory systems, such as air conditioning compressors, to run more efficiently regardless of the speed at which the engine is running by continuously optimizing the compressor speed.

Rob Smithson, VP of Product Development at Fallbrook has been with the company since 2002. His previous 20 years work as an engineer in the automotive and aerospace industries, as well as working with Southwest Research Institute in San Antonio, TX, introduced him to “every existing CVT technology out there.”

“The problem with CVTs,” Smithson explains, “is they are all some combination of heavy, delicate and expensive. Fallbrook’s was the first CVT I saw that was light enough, compact enough, efficient enough and rugged enough to put on an application that is a real problem for any other CVT, and that’s the bicycle.”

It was those same traits that have been in demand by engineers for years for units such as accessory drives, auxiliary power units (APUs) and power take-offs (PTOs) where it is ideal that the device operate at a constant speed. Unfortunately, it is often tied to engine speed, causing a less than optimal design choice.

In certain industries, such as transit buses and military applications, there is a lot of idle time. A CVT allows the alternator to be sped up at idle, then slowed down when the vehicle is in motion without over speeding it, but “inevitably you run into problems with controls and control stability with conventional CVT technologies,” says Smithson.

The unique mechanical geometry of the NuVinci device—an array of spheres around a central idler with two rings to transfer the power in and out—is what Smithson claims allows Fallbrook’s CVP to solve the common shortcomings of present day CVTs. The Delta Series accessory drives and drivetrain technology decouple accessories from engine RPM, allowing the accessory to run at the optimum speed regardless of engine speed. Their flexible packaging (in-line or concentric input/output shafts) enable use of existing beltlines.

Traction devices transfer torque across a thin layer of fluid between two metal rolling elements. The systems tend to use expensive or difficult to make, non-standard parts.

Fallbrook’s NuVinci CVP is a traction drive, but uses a common part shape, the ball-bearing. “People know how to make the parts that make up our device,” says Smithson. The spheres are made of standard bearing steel. “We’re not using any exotic materials or material processes.” This results in a simplified manufacturing process, lowering part production costs and allowing for easier part replacement.

“For the kind of torque capacity we have, other CVT geometries would be heavier. It comes back to our basic geometry. The two rings, the array of balls and the idler give you the capability to transfer a lot of torque through a very compact package,” says Smithson.

Applications in the field

The field testing resulted in a projected fuel savings of up to $1,500 per annum for the bus air conditioning systems.

“Historically, these belt-driven accessories have been connected directly to the engine, so their speeds are tied to engine RPM. They have to be sized to meet worse case load conditions at low engine speeds, such as idle, which results in more parasitic losses than necessary and wasted energy at high engine speeds because of excess capacity,” says Smithson.

“Our product line is designed to enable accessories such as an air conditioning compressor to run more efficiently regardless of what the engine is doing by continuously optimizing compressor speed,” he says. “Therefore, accessories no longer need to be sized to meet worst case load conditions at low engine speeds, such as idle.

“We believe that implementing the NuVinci system requires little in the way of design modifications, since we can use nearly the same footprint as a current AC unit with a smaller compressor alongside our CVP system.”

In August of 2009, Fallbrook announced a manufacturing license agreement with Hydro-Gear—a manufacturer of drive systems for lawn and garden equipment—to develop new applications such as zero-turn mowers where a smooth transmission technology such as NuVinci allows the mower to move forward and backward quickly without manual shifting.

“We’re working on a production design with Hydro-Gear, and we’re moving toward commercial implementation with them in the 2012 time frame,” says Smithson. The technology’s scalability allows it to be utilized on quite possibly any vehicle with a transmission. Recently, the company also partnered with technology development company TEAM Industries to develop electric vehicle transmission prototypes for small vehicles such as UTV’s and NEVs . The ‘Holy Grail’ of the transmission industry may be found.

First initiative will be with Tomberlin Anvil vehicle.

A recent announcement made on January 19, 2011 confirmed that TEAM Industries along with technology development company, Fallbrook Technologies will partner to develop electric vehicle transmission prototypes.

The first initiative under the agreement is for the Tomberlin Anvil, a street-legal Neighborhood Electric Vehicle (NEV) offering a range of more than 40 miles.

"We are equally committed to improve both the performance and battery life of electric vehicles," says Rob Smithson, Fallbrook’s Vice President of Business Development and CTO.  "Our NuVinci product line allows an electric car motor to operate in a more efficient manner by continuously optimizing the electric powertrain for driving conditions."

Production of the powertrain will occur at TEAM Industries’ Minnesota-based facilities. "Working with Fallbrook on this initiative makes perfect sense for us," says Tony Passanante, Senior Director of Marketing and Strategic Planning for the company. "Our core competency is designing and manufacturing systems that transmit power and put it to work quietly and efficiently."

"We’re continually searching for leading suppliers capable of providing technologies to make our eco-friendly automobiles more compelling and exciting than anything else like it on the market," said Michael Tomberlin, CEO of Tomberlin. "That means offering improved hill climbing, acceleration and towing capacity as well as other rider benefits in our vehicles. Developing systems that enable electric vehicles to enhance performance is a key step towards achieving that goal, thus we are very pleased to support the Fallbrook-TEAM development initiative."

Beyond automotive applications, Fallbrook confirms that the scalable technology will be able to be used on light-duty construction and utility electric vehicles, as well. The technology is potentially applicable to any product using a transmission.

Unique fluid for a unique transmission

Valvoline, a division of Ashland Inc., is currently designing and testing specialty fluids to optimize the performance of Fallbrook’s NuVinci continuously variable planetary (CVP) transmission technology. The Invaritorc brand of traction fluids eliminates the need for gears while providing torque transfer with virtually no slippage. The synthetic Invaritorc 638 fluid works at extreme high and low temperatures.

Back in 2006, Fallbrook Technologies and Valvoline signed a trademark licensing and development agreement for fluids to be created specifically for the Fallbrook’s NuVinci CVP transmission technology.

With the NuVinci system, torque is transferred between the rolling elements through shear forces in a thin fluid film. Under normal lubrication conditions, the shear forces transmitted are small. But, during unique operating conditions such as while during high speeds, the fluid exhibits shear force transmitting properties similar to those of elastic solids (materials like steel and aluminum). In essence, the traction fluid serves the same purpose as the steel gear teeth of a conventional transmission.