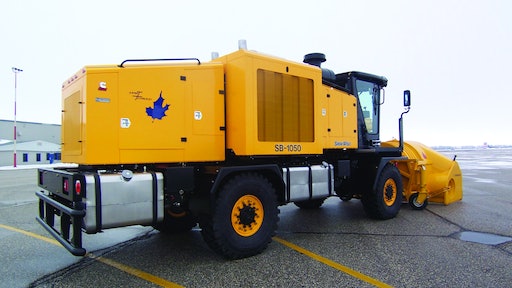 When Airport Technologies Inc. went looking for a clutch solution for its newest airport snow blower model, the SnowWolf SB-1050, its expectations and requirements were high. “The clutch needed to be able to handle a 1,050 hp engine and 3,400 ft.-lbs. of torque, but also have smart technology to protect itself from damage,” says Barry Smith, president of Airport Technologies, Southport, Manitoba, Canada.

Another challenge Airport Technologies had to overcome with finding the right clutch manufacturer was that it had already started building the machine with a proprietary gearbox developed by Rj Link Intl. Inc., Rockford, IL, onto which the clutch had to be mounted directly. The clutch manufacturer would have to work closely with the gearbox provider to integrate its custom solution onto the gearbox and into the snow blower.

PT Tech, based out of Sharon Center, OH, is no stranger to partnering with other companies, and its hydraulic PTO clutch fit the demands. “What was interesting to us when we first started talking with PT Tech,” says Smith, “was they demonstrated to us they had no reservations working with another company, and in fact they ended up working very well and closely with the gearbox manufacturer to pull this product solution together and deliver it to us on time.”

“They wanted a combination of a hydraulic pump drive, a clutch that was remotely actuated form the cab, and a gear reduction unit,” explains Joe Guinter, general manager, Engine Products Group, PT Tech. “Airport Technologies had already been working with Rj Link and wanted us to work together to come up with a solution.” The clutch couldn’t simply be coupled to the end of the gearbox because of size constraints in the machine design. The system had to be fully integrated together in order to meet those size requirements.

Airport technologies had looked at other clutch suppliers, but struggled to find one willing to work together with another company for an integrated solution. “It’s a lot more work to partner for a system solution,” explains Guinter. “And it also requires the sharing of intellectual property.”

PT Tech likes to consider itself an extension of its customers’ engineering department. “We frequently work with the customer to offer a customized solution. Close to 97% of our sales are to equipment manufacturers. Our expertise is helping OEMs design specialty solutions,” says Guinter. “We get really excited when there is an opportunity like the one with Airport Technologies to integrate a product into a new piece of equipment.”

The initial brainstorming session between Rj Link and PT Tech defined which company was going to take on which role in the integrated solution process. Each company brought its own area of expertise. The team looked at the entire scope of the project and decided where to use each company’s products, discovered where new systems needed to be designed, and which company’s design team would undertake the development.

PT Tech’s willingness to coordinate the project was a blessing for Airport Technologies who admits that having to coordinate meetings and give direction and guidance to the two companies would have been too time consuming. “When we were working on this project, our design people were completely tied up with the design itself,” explains Smith. “We really enjoyed PT Tech’s willingness to work jointly with Rj Link on the project.”

Proprietary information is a competitive advantage for any company. But while competitive edge is important, there is a growing trend between companies to share intellectual properties for the benefit of a “greater solution”. Sounds cliché, but according to Guinter “there has been an opening up where companies are realizing that by working together and sharing innovation and intellectual properties, a greater solution can be created than what could be accomplished internally.”

According to Dr. Henry Chesbrough, “The central idea behind open innovation is that in a world of widely distributed knowledge, companies cannot afford to rely entirely on their own research, but should instead buy or license processes or inventions (i.e. patents) from other companies.” Dr. Chesbrough continues, “Not all the smart people work for us. We need to work with smart people inside and outside the firm. External R&D can create significant value”.

“This project for Airport Technologies was a lot about the open innovation concept,” says Guinter. “We had a lot of meetings with engineers and staff from both companies where we created a collaborative design in which both companies contributed their expertise.

“It comes back to how we view ourselves as an extension of a company’s engineering department. We are experts in the design of friction products, and we can bring that expertise to the OEM. For an equipment manufacturer, they aren’t going to employ a clutch or brake specialist unless they are a very large OEM.” For the small- and medium-sized equipment builders that have around a dozen engineers, there isn’t going to be an expert engineer for every system. That’s where component manufacturers, as system integrators and custom solution providers, can keep a project moving.

The Airport Technology Snow Wolf SB-1050 was built to address the rapid pace snow removal needs to happen on the runway. The vehicle was built to run at 25 miles per hour and throw snow 85 feet. “Overall we wanted our machine to be able to run fast, throw snow and achieve a clearing capacity of 7,500 tons per hour,” says Smith.

The sheer size of the new model was the reason the company needed to find a new clutch solution that could not only handle the torque and horsepower of the machine but also was smart.

The hydraulic power take-off (HPTO) diesel engine clutch from PT Tech features a hydraulic cylinder that applies pressure to the clutch plates. The clutch system is controlled via a microprocessor control system that is J1939 compatible. “Our controls plug directly into the engine’s computer system and into the main machine controller. Typically the engine and the clutch are controlled through a single touch screen display in the cab,” explains Guinter.

The electronic controls allows the operator to monitor everything that is going on with the engine system, but also allows the system to be smart, a feature Airport’s Smith was looking for. If there is a problem with the engine system, the engine relays information to the CAN bus system and a custom sequenced shut-down process, that has been programmed into the control system, can be followed to protect the components and machine.

A recent change PT Tech has made to its control system is a new piece software solution called ProLink. The software allows the OEM to configure the clutch operation to its particular machine instead of PT Tech making programming changes all in-house thus eliminating the need for expensive and time-consuming custom code writing. This allows a customizable solution for the OEM, and allows them to make changes, and shut down sequences and other safety stops as they see fit.

“In our control software we monitor what the engine is doing. If the system sees an instantaneous deceleration that is predicted to stall the engine, it can read the warning signs and release the clutch before the engine stalls.

“The ProLink software would allow a customer to turn that function on or off, but also allow them to set the rpm threshold where that stall prevention kicks in.”

In the end, the open innovation concept that PT Tech adheres to in order to provide its customers with the custom solution allowed them to work effectively with Rj Link to deliver exactly what the customer needed in the time frame given.

Jack of all trades, master of none

A destined hybrid of intention and collaboration