When two become one 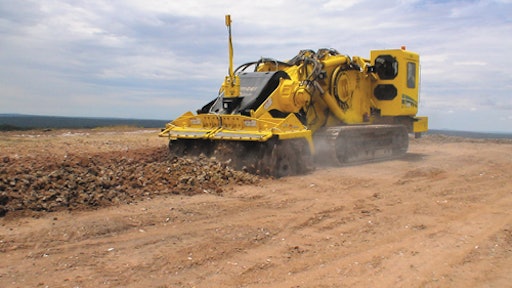 Around 2007 Vermeer Corp., Pella, IA, began to investigate increasing the power output of its terrain leveler to 1,200 hp. While looking into its engine options, Vermeer found using two 600 hp engines with a common gearbox would be the most economical and efficient option.

However, since there is limited industry experience designing a dual-engine system, Vermeer collaborated with its component suppliers to ensure optimal system efficiency was achieved, including PT Tech, Sharon Center, OH, for the clutch system.

Mike Loufman, Sales Engineer at PT Tech, says the project required a multifaceted approach that involved hydraulics and electronics engineers, sales staff and management working together with the Vermeer team. “Clutches are a critical component in the driveline system. It’s really important for the overall operation of the machine that the driveline works flawlessly,” says Loufman.

Efficiency is always the goal

The choice to use clutches for the dual-engine drive system was based on Vermeer’s goal of maintaining efficiency. Other methods of energy transfer, like fluid couplings, have inherent inefficiency, as horsepower is often lost through the fluid medium that is being used in the couplings.

“A device like a fluid coupling might have been easier to integrate into the driveline; however, one of the major drawbacks of a fluid coupling and other similar methods of energy transfer is their inability to transfer full horsepower,” says Loufman. “For instance, if the hydraulics are only 80% efficient, and the couplings are 5 to 20% inefficient, we’ve introduced inefficiency upon inefficiency, and reduced the output of the 1,200 hp machine.”

Clutches, on the other hand, have little efficiency loss. “All the horsepower that’s going into the clutch is driven to the gearbox,” he says. A clutch is a mechanical fuse between an engine and a driven mass.  In high horsepower applications it is especially critical to be able to decouple that load from the engine before start up in order to protect the components in the system.

Having both engines use the same gearbox helps with efficiency because it enables the terrain leveler to always use the full 1,200 hp output of the engines. Mark Cooper, Senior Director of Specialty Excavation at Vermeer, says the company looked at using one engine to propel the machine and one engine to run the cutting drum. However, doing this can be wasteful; if it only takes 300 hp to propel the machine, the remaining 300 hp from that 600 hp engine cannot be transferred to power the attachment. It’s essentially a ‘use it or lose it’ situation.

Designing a dual-engine, dual-clutch system posed some challenges for the two companies. According to Loufman, one of the main complications was the hydraulics control strategy. Because PT Tech used wet clutches for this system, the clutches had to have fluid flowing through them at all times. But if one of the engines broke down, the hydraulic fluid would stop flowing.

When one engine breaks down, it stops spinning and its clutch stops transferring power, thus hydraulic fluid stops moving. However, the second, still functional engine and its clutch continue to spin, and since it is coupled to the gearbox, the broken down engine’s output shaft keeps spinning. But, since no hydraulic fluid is moving through that clutch, problematic heat begins to build up.

To keep this from happening, Vermeer and PT Tech worked together to design a cross lubrication system between the clutches. Even if one engine or clutch breaks down, the functional clutch will pump enough fluid to lubricate itself as well as the broken clutch.

Vermeer also found that using two engines enabled the terrain leveler to continue operating even if one of the engines went down. Loufman says this is a game changer because mining machines like Vermeer’s terrain leveler are often used in extreme environments far away from the nearest maintenance facility. Being able to use only one engine allows the operator to safely track the machine back for repair.

Cooper says there is potential for Vermeer to use a dual-engine system in the future. “We’re pleased with how the machine is running,” he says, “and when we do a bigger machine we will evaluate two engines versus one engine again.”

Vermeer will publically launch its 1655 terrain leveler with the dual-engine system in September at MINExpo 2012.