Uniquely designed wheels on the Sidewinder forklift truck enable it to instantly move in any direction. 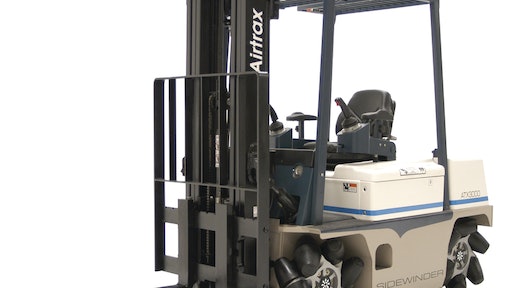 An omni-directional drive system on the SIDEWINDER forklift truck enables to vehicle to instantly move in any direction.

Around the circumference of each wheel are spindles canted at an angle, with each spindle containing a pair of rollers. Each wheel is independently controlled; the speed and direction with which each wheel moves determines the trajectory of the vehicle.

Having the rollers on the Type 1 wheels positioned at an angle opposite that of the Type 2 wheels creates a right angle of force that keeps the vehicle balanced. This is also what enables the forklift to move in a variety of directions. “Any combination of [force] velocities will result in the vehicle moving in any direction in the plane,” says Nicholas Fenelli, President of Vetex.

When all four wheels rotate in the same direction, the Sidewinder will move forward or backward. Once the Type 1 wheels begin rotating in the opposite direction of the Type 2 wheels, however, the forklift will move sideways because of the force created by the opposing wheel movements. It also rotates a full 360 degrees when both wheels on the right side are directed to move in the opposite direction of the wheels on the left side.

The Sidewinder’s unique wheel design enables it to climb over obstacles that are about 1/4 of the wheel diameter. Since the rollers on each of the wheels are angled, the tips of the rollers are able to approach objects at an angle and engage like a tooth in a gear, lifting the entire wheel up and over obstacles.

The Sidewinder’s omni-directional technology has also been shown to perform well on slick surfaces, such as ice and the floors of engine test cells.

Accurately controlling the speed and direction of each wheel independently is an important aspect to the omni-directional system’s functionality. According to Fenelli, electronic controls offer more accuracy and repeatability. “The flexibility of the programming and sophistication of the algorithms that we were able to obtain electronically was far superior to that of a straight hydraulic control,” says Fenelli.

Movement is determined by the Sidewinder’s joystick transmitting commands to the four wheels through a CAN bus. Each wheel has a controller that tells it how fast and in what direction to move based on the received CAN bus signal.

Fenelli says this system also makes the vehicle operator friendly. “It’s intuitive and there’s no slope to the learning curve,” he says. “In three minutes you know how to operate it and in half an hour you’re proficient.”

Electronics help with the efficiency and safety of the vehicle as well. According to Fenelli, when the Sidewinder was originally developed in the mid-90s it was the first AC powered electric vehicle in the United States. Regenerative braking recharges the battery as well as sustains the lifespan of the brakes. Stopping the vehicle electrically keeps the brakes from wearing out because they are never applied while the vehicle is moving.

Once the Sidewinder senses it has come to a stop and stayed motionless for a short period of time, the processor’s algorithms are able to tell there is no intention by the operator to move the forklift again anytime soon and automatically applies the safety brake. The system eliminates the need to worry about an operator getting off of the forklift and forgetting to set the parking brake.

Implementation on other vehicles

While Vetex continues to build and service the Sidewinder, the company’s main focus is developing and manufacturing robotic mobility platforms and custom built omni-directional vehicles. “There are all kinds of projects that people absolutely need these capabilities,” says Fenelli. “There’s no other way to solve their problem. And we help them with that.”

Fenelli says there’s really no limit to what type of vehicle the omni-directional system can be used on. The only obstacle is the weight of the vehicle.

“Our standard robotic platform has a capacity of 20,000 pounds on four wheels,” says Fenelli. Due to the system's modularity, however, more wheels can be added as needed. Fenelli says the company has created vehicles with anywhere from four wheels to 16, and has even created concepts for vehicles with 32 wheels.

“We’re in the business to solve material handling problems,” says Fenelli. “It’s no job too small.”

Omni-directional movement is based on the system’s unique wheel design. The multi-roller wheel is commonly known as a Mecanum wheel after its inventor, Bengt Ilon, who designed it in 1973 while working for the Swedish company Mecanum AB.

Mecanum AB created a prototype forklift truck using the wheel design and hydraulic controls that, unfortunately, were not able to make the system function properly.

Peter Amico, President of the company Airtrax, was introduced to the technology in the mid-1990s while working on a cooperative research and development agreement (CRADA) with the U.S. Navy, who had bought the system’s patent from Mecanum AB.

Amico saw the potential to use the omni-directional technology for helicopter handlers, enabling the vehicles to easily maneuver through a hanger and pack helicopters more densely. But when he saw there wasn’t enough demand, he looked for other areas to apply the technology. Like Mecanum AB, Amico found forklift trucks to be a better market.

Instead of hydraulic controls, though, Amico employed an electronic drive system which was better able to operate the system. In 2000 Amico introduced the Sidewinder to the public.

However, production was halted in 2006, and Airtrax shut down two years later. Several of its former employees decided to set up their own company, Vetex, and in 2010, obtained the licensing rights for the Sidewinder, bringing it back to the market.