Plug in for fuel and emissions savings 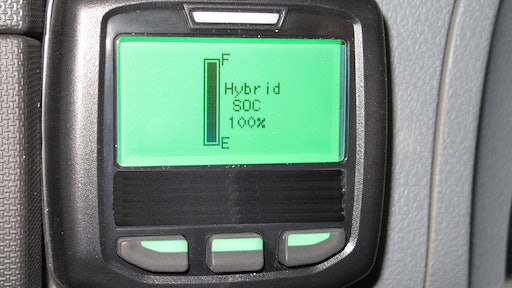 A display screen in the vehicle cab shows the state of charge for the system's lithium-ion batteries provided by Johnson Controls.

In June 2013, Odyne Systems LLC (company information, 10689265) was chosen to participate in a U.S. Department of Energy (DOE) award which will enable the company to integrate its plug-in hybrid technology into medium- and heavy-duty trucks across North America (learn more, 10957821). Through this award Odyne is working with various OEMs to install its hybrid system on over 120 vehicles in 2014.

Added directly onto a standard chassis, Odyne’s system incorporates regenerative braking, electric power conversion and energy storage technologies to help reduce fuel costs and emissions. According to Joe Dalum, President and CEO of Odyne Systems, the company is the only participant in the DOE award providing a plug-in hybrid system for Class 6, 7 and 8 vehicles.

In addition to expanding the number of vehicles using the Odyne system, Dalum says participating in the award program will provide the company with the opportunity to closely monitor how its system performs in various applications and climates.

How the hybrid system works

Dalum says one of the benefits of the plug-in hybrid system is its ability to be integrated in a minimally intrusive way so as not to disturb the manufacturing process. This also ensures the vehicle’s warranty remains intact and enables the system to be more easily scaled to various types of vehicles.

The system interfaces with Allison Transmission’s (company information, 10054989) fully-automatic transmissions by connecting an electric motor, provided by Remy International Inc. (company information, 10055283), to the transmission’s power take off (PTO) unit. The electric motor is used to provide hybrid drive functionality while the vehicle is in motion, as well as capture energy during regenerative braking to help recharge the system’s batteries. In hybrid drive mode the electric motor works in parallel with the engine and quickly puts torque into the drive system to provide faster vehicle acceleration. This removes some of the burden from the engine to provide all of the acceleration power for the vehicle and minimizes fuel use. “We’re able to complement the performance of the transmission,” says Dalum. “When you use our system on the larger vehicles, it can reduce fuel consumption by up to 50% or more depending upon how the truck is used. And when you get into the larger trucks, that is quite an advantage.”

Supplemental power and efficiency is also provided by the hybrid system’s regenerative braking capabilities. During regenerative braking the electric motor acts as a generator to recapture up to 40 kilowatts of power that would otherwise be wasted; this captured energy is then used to help recharge the onboard battery pack produced by Johnson Controls Inc. (company information, 11461995).

The battery pack allows engine-off operations at the work site by collecting and storing energy that can be used to power various tools or equipment. “That allows the vehicle to remain in all-electric mode with the engine off,” says Matt Jarmuz, Director of Sales at Odyne Systems LLC. “It provides a quicker return on investment for the end users by increasing the fuel savings and [reducing] emissions.” Eliminating the need to run the engine or have a second diesel generator onboard for work site operations also reduces noise levels—important when working in urban environments or communicating on the work site—and is beneficial for those working in parts of the country with anti-idle laws which stipulate how long, if at all, an engine can idle.

Depending on the needs of the application, either a 14.2 or 28.4 kilowatt-hour pack is available. In May 2014, Odyne announced the incorporation of advanced technology within the hybrid system that now enables it to provide up to 36 kilowatts of exportable power (learn more, 11459490 and 11459329).

An SAE J1772-compliant charging system—the same type used on electric vehicles such as the Nissan Leaf—allows the hybrid system to be plugged into the grid for battery recharging. Dalum says a 220/240- or 110/120-volt plug can be used, eliminating the need for a dedicated charging infrastructure. “We do supply a Level-1 charger with the vehicle, so you can recharge the vehicle off a conventional plug like a 110-volt plug,” he says.

While the battery pack can operate a long time on a single charge, if an occasion should arise where it needs to be recharged but cannot be plugged into the grid, the engine can be used to recharge the batteries. The hybrid system’s computers will automatically interface with the engine, turning it on to provide power to the worksite tools or equipment while simultaneously recharging the battery pack. Once recharged, the system’s electric motor and battery resume powering the equipment and the engine turns off again. “That’s different from pure electric trucks,” says Dalum. “They don’t have the ability to be recharged by the truck itself.”

Upgrades for the present and future

With the DOE award, Odyne is making various enhancements to its existing technology such as the inclusion of smart grid functionality. When plugged into a smart grid, the vehicle receives information from the grid on when the best time to recharge is in order to access the lowest utility rates while still completely charging the vehicle’s battery system. “The smart grid capability is an advanced feature which will allow our truck to have bi-directional communications with the grid in the cases where the utility has that functionality available,” explains Dalum.

The smart grid functionality, in conjunction with the system’s ability to provide exportable power, will also be beneficial for future vehicle-to-grid capabilities, such as putting electricity back into the grid. “You can use your hybrid system to enhance the stability and performance of the electrical grid, and in exchange for that the user is potentially eligible for a stream of revenue that might help with the overall return on investment of the [hybrid] system.”

Upgrades are also being made to the telematics system, enabling it to collect and transmit data at 1 hertz. “Through that capability we are monitoring the J1939 bus with a proprietary CAN channel that we have for our hybrid system,” says Dalum. “We’re able to gather a tremendous amount of information about the vehicle every second, and the operation of the components on the vehicle.” He adds that the hybrid system components were upgraded, as well. Each component is able to communicate its performance on the hybrid system’s CAN channel, including how much energy it is consuming.

By upgrading the telematics system now, not only is Odyne able to collect a larger amount of data, but the company is also preparing its hybrid system for future technology advancements. Dalum says the upgrade will enable Odyne to dynamically optimize the performance of the hybrid system to better match how the customer intends to use the vehicle in the field. “As a stepping stone to that, what we’re doing with the DOE project is introducing two different types of calibrations for our hybrid system,” he says.

“In the future what we would like to do is dynamically optimize the system so that as the operators change their work practices or as the vehicle moves to new locations, [we’ll be] able to constantly make sure the system is working at its maximum efficiency,” says Dalum. “Sending the best calibration to the vehicle in anticipation of how it will be used [will provide] a big benefit; we’ll be able to optimize how the vehicle works in the field. We see that as a very exciting technology that we’re looking forward to putting into the vehicle.”

In early 2014, Allison Transmission Inc. endorsed the use of its 3000 and 4000 Series transmissions with the Odyne plug-in hybrid system (read more, 11386797). “We are the only manufacturer that’s been exclusively approved and endorsed by Allison to operate through the power-take off (PTO) of the transmission, and provide hybrid functionality,” says Joe Dalum, President and CEO of Odyne Systems LLC. “And we work closely with Allison through the design process to make sure the warranty of the Allison transmission is maintained.”

As the partnership between Odyne and Allison Transmission has progressed over the years, Dalum says there have been benefits for both parties. By collaborating together during the design process, he says Odyne is ensured that it has a robust system while Allison Transmission is guaranteed the warranty on its transmission will remain intact. He also notes that many of Odyne’s customers tend to favor Allison automatic transmissions for their performance.

In recent months Odyne has started partnering with various Allison Transmission distributors, such as Inland Power Group of Butler, WI (learn more, 11419846 and 11442547). These partnerships will help facilitate Odyne’s ability to deliver the 120 plug-in hybrid systems for which it’s contracted under a U.S. Department of Energy award.

Along with being integrated at the OEM level, the Odyne plug-in hybrid system can also be retrofitted onto existing vehicles. “[This] allows us to give an option to fleets to more quickly reduce their fuel consumption and emissions on existing vehicles,” says Matt Jarmuz, Director of Sales at Odyne Systems LLC. The capability for retrofitting has become increasingly more important in recent years as the amount of time between vehicle purchases has lengthened due to the extended lifespan of trucks. Retrofitting enables newer technologies designed to offer fuel savings and reduced emissions to come to market sooner.

Joe Dalum, President and CEO of Odyne Systems LLC, says the company estimates there are currently over 8 million vehicles on the road weighing 14,000 pounds or more. If it were not possible to retrofit any of those 8 million vehicles with fuel-efficient and emissions-reduction technologies, and they were only available on new vehicles, Odyne estimates it would take decades to make significant in-roads in the fielding of those technologies. “The ability to upgrade existing vehicles in the future will be a very important part of the process of accelerating the adoption of new technology,” says Dalum.

Search 11459326 at oemoffhighway.com to learn about Odyne’s grant from the Electric Power Research Institute to retrofit medium- and heavy-duty work trucks in California.