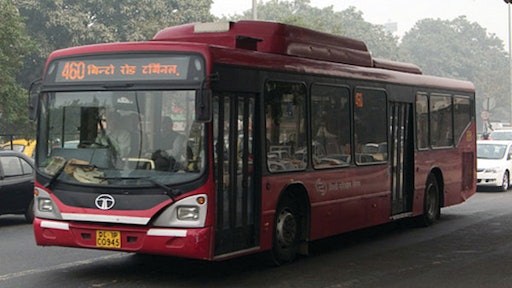 The Lightning Hybrids hybrid system is well suited for use on vehicles making a lot of stops and starts throughout the day, including city buses and delivery vehicles.

Every time a vehicle stops and starts, it experiences the most inefficient event in its drive cycle. For vehicles making frequent stops and starts throughout the day—such as city buses and delivery trucks—this waste of fuel can become quite costly. In an effort to help these types of vehicles minimize fuel consumption, Lightning Hybrids developed a hydraulic hybrid system which collects and stores energy during stopping events which is then used for vehicle acceleration instead of the engine.

Originally begun with the goal of creating a hydraulic hybrid sports car for the Automotive X Prize competition, Lightning Hybrids' founders soon realized their technology could be scaled up for use on medium- and heavy-duty vehicles. “From a logical standpoint, there are certainly a lot more vocational vehicles working for a living, like trucks and buses, that do stop-and-go than there are consumer cars, so why not really look at what it’s going to take to scale up,” explains Tim Reeser, President and co-founder of Lightning Hybrids (company information, 11303476). So, the focus of the company was shifted to working with heavier duty vehicles that could make a greater impact on the amount of fuel being used in the marketplace today.

Added to the driveline of a vehicle, the Lightning Hybrids system uses regenerative braking technology to collect otherwise wasted energy during braking events. This energy is then stored as mechanical energy in a high pressure hydraulic accumulator until it is needed for vehicle acceleration. Once the gas pedal is pressed, the stored energy is used to drive the system’s hydraulic motors which provide torque to power the wheels, eliminating the need to use the engine—and thus fuel—to accelerate. Cutting down the amount of work the engine does can also help reduce emissions.

When developing its hydraulic hybrid system for larger vehicles, Reeser says the company had to ensure its solution was inexpensive enough that customers would get a return on their investment, and that the system would be efficient enough to warrant the effort of adding it to a vehicle. To achieve both of these goals, Lightning Hybrids chose to use mechanical batteries in the form of hydraulic accumulators.

Because the mechanical batteries have 10 times more power density than their chemical counterpart—electric batteries—the hybrid system is able to more effectively recover all available energy during braking events. Reeser explains that electric batteries are often limited by how fast they can be charged, and in large vehicle applications it’s important to have something with high power density so it can quickly store and use energy. He says the composite accumulators in the Lightning Hybrids system have the most power density and energy storage capabilities currently available on the market.

Reeser says the mechanical battery system is also a more cost-effective option. “Our hydraulic accumulator, or mechanical battery, is about one-quarter to one-eighth the cost of a regular electric battery with the same power density,” he explains. In addition, the accumulator has a 15 year life—or the equivalent of one and a half million cycles—as opposed to an electric battery whose lifespan is generally measured by thousands of cycles. “When you look at the big trucks and buses that sometimes run three shifts a day…they have a lot of stop-and-go cycles,” says Reeser. “We needed the ability to handle that without the battery wearing out and needing to be replaced. The accumulator serves that well.”

Weight savings is yet another benefit the mechanical battery system provides. While the Lightning Hybrids system adds about 650 pounds to a vehicle, Reeser says a pure electric hybrid system can add upwards of 1,500 to 2,000 pounds. He notes that some customers have been able to mitigate the added weight of the system through the purchase of vehicles with smaller engines. “They can handle a smaller engine because we’re providing so much additional torque when [our hybrid system is] added to the vehicle.” Use of the smaller engine provides better gas mileage and fuel savings, as well, which can help with the total return on investment (ROI) for customers.

Reeser says that while series systems do offer high energy efficiency and mileage savings benefits, they are more costly because of the amount of work necessary for integration. Series hybrids also cannot be retrofit onto existing vehicles, something which can help make it easier to get newer technologies, such as hybrid systems, into the marketplace. “And with the addition of powersplit—which is the ability to keep your charge during a coast or when using the engine—it allows us to get some of that extra efficiency that a series system gets without the downside of not being able to retrofit or a lot of extra complexity and cost,” he adds.

Though there is sometimes concern over the drivability of parallel hybrid systems, Reeser says Lightning Hybrids has overcome those by ensuring a smooth transition between hydraulic power and diesel, gas or alternative fuel power. Drivers don’t have to do anything different; simply braking and accelerating as they normally would activates the system, without the driver noticing.

In addition, the company has found the hybrid system enables vehicles to stop about 10 feet shorter, which can be a crucial safety factor. And with the extra torque the system is able to provide during vehicle acceleration, drivers are able to merge into traffic much more quickly, providing a further safety benefit.

Being more proactive to benefit the customer

As part of the hybrid’s control system, Lightning Hybrids developed a telematics system which communicates to the company how the hybrid system is performing on a daily and weekly basis. The telematics system monitors efficiency gains, overall efficiency of the hybrid system, the number of stopping and starting events the vehicle makes, as well as any error codes within the hybrid system itself or the vehicle’s electronic control unit (ECU). “It allows us to have very close communication with the customer, and to closely track all aspects of the system from efficiency to reliability, and it allows us to be very proactive,” says Reeser.

He continues that there have been a few instances in which the telematics system alerted the company to some form of error, and it was able to troubleshoot and fix that error before the customer even knew there was an issue. “We’re proud of the technology and certainly excited about the way it allows us to take very close care of the customers and have good engagement to make sure they have what they need.”

To be even more proactive, Lightning Hybrids will be releasing a mobile app that maps driver routes to help potential customers determine how much efficiency and ROI they could expect if they used the hydraulic hybrid system. Drivers simply press the mobile app’s ‘start’ button when starting a route, and hit ‘stop’ once the route is complete. The drive route is then uploaded to Lightning Hybrids’ database where the company can run the route through a simulation model to determine possible fuel savings and efficiency gains. “We think that’s key to this business, to be able to give customers a predictive response before they buy, and allow the sales cycle to go much faster; allow the customer to buy with much more confidence [knowing] what the outcome is going to be,” says Reeser.

Providing this type of information to customers helps ensure they are choosing the right technology for their application. In general, Reeser says the Lightning Hybrids system is best suited for applications in which there are at least four or five braking events per mile, and for vehicles with a gross vehicle weight of 14,000 to 40,000 pounds. “It always makes sense to recover your braking energy, just as long as [it can be done] cost effectively,” he says.

While city buses and delivery vehicles tend to be the typical applications for the hybrid system, Reeser says the company is always looking to expand beyond those, and is continuously adding new vehicle platforms onto which the system is integrated. He adds that the hybrid’s powersplit technology will be beneficial for expanding into other applications, such as mining, and enable Lightning Hybrids to provide fuel savings and power through methods other than just recovering energy through stop-and-start events.