A balance of machine and earth 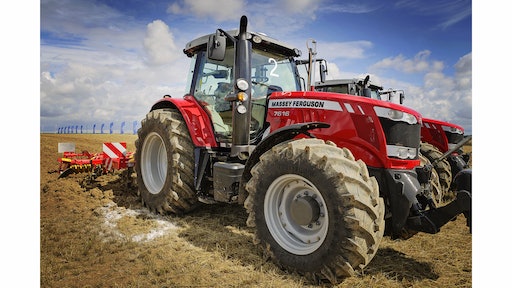 To better meet the increased size, speed and torque requirements of today's agricultural equipment, Trelleborg has developed technologies such as its Extra Large tires paired with High Knurling rims, a complete system to handle high stress and torque.

In an effort to reduce soil compaction, many tire manufacturers have been focusing their developments on tires commonly referred to as increased flexion (IF) and very high flexion (VF) tires. These tires are designed to carry the heavier loads of today’s agricultural equipment, but at lower inflation pressures than conventional tires. “Essentially we’re going to let that tire squat more or run a little lower as far as its profile [is concerned],” explains Sloan. Doing so creates a larger footprint which helps minimize the amount of pressure put on the ground and thus the amount of soil that is compacted. “You’re spreading out that load over a larger area which reduces your pounds per square inch,” explains Sloan.

IF tires are able to carry the same load as a conventional tire but at a 20% lower inflation pressure, while VF tires carry the same load at a 40% reduced inflation pressure. The lower psi of the IF tire enables it to provide a 5% increase in contact area which leads to 5% less soil compaction, says Sloan. The VF tire, on the other hand, increases ground contact area by 13 to 14%.

One of the biggest challenges to reducing soil compaction is the ever-increasing size of agricultural equipment. “Fifteen years ago the base weight of the largest combine on the market was 30,000 pounds,” says Nicolas Dubuc, Application Engineer for Agricultural Track Systems at Soucy International Inc. (company information, 12001612). “Today the largest combine from the same OEM weighs over 45,000 pounds.”

While IF and VF tires were designed to help compensate for this issue, Sloan says the size and weight of equipment will continue to be a challenge for tire manufacturers. Current equipment architecture allows tires to be up to 80 inches tall and 27 to 28 inches wide. However, Sloan says if the equipment gets any heavier while the architecture stays the same, larger tires cannot be used and soil compaction will be affected. “The inflation pressures are going to have to go up and the load’s going to have to get transferred down to the ground.

“We’re backed into a corner right now,” says Sloan. “Until manufacturers change the design of the machine to allow larger tires to carry a [heavier] load, we have to increase the inflation pressure which increases the ground pressure.”

Rear combine tires are a current example of this issue. While many tire manufacturers have VF technology for this application, there is only a certain size of tire that fits into that rear tire space. If the next model year combine goes up another 3,000 pounds, Sloan says tire manufacturers will have to increase the inflation pressures to carry the load, putting them right back where they started before the implementation of the VF technology. “It’s going to be interesting to see if [OEMs] determine that soil compaction is critical enough to make that much of a change to a piece of equipment,” in order to let tire manufacturers add larger tires that will carry more load with minimal inflation and ground pressures, says Sloan.

A move towards tracks?

To help find a balance between heavier equipment and reduced soil compaction, there has been a growing use of tracks—either in place of or combined with tires—on agricultural equipment (see sidebar, pg. xx). Dubuc says the increase has been particularly in the high-horsepower and harvest equipment sectors, as well as in a few niche applications such as specialty crops. Grain tank capacity and header sizes have also increased, creating even more weight that needs to be carried through the field. “Although tire technology is evolving, the overall footprint available to support that weight hasn’t increased much in the past 15 years. This means tracks are the primary way to reduce the impact of such heavy loads on soil.”

Compared to tires, tracks offer the benefit of creating a larger footprint without having to be wider in size, says Dennis Hare, Director of Sales and Marketing for Rubber Tracks and Specialty Ag Products at Veyance Technologies (company information, 10716393). This enables the tracks to more easily carry the heavier loads of today’s equipment while reducing soil compaction. In addition, he says continuous rubber tracks can offer features such as better traction, a smoother ride and higher field operating speeds. “As equipment [gets] heavier and horsepower increases, while width limitations become more restrictive, rubber tracks become a more attractive solution to the challenges in agricultural and industrial applications,” says Hare.

Dubuc adds that tracks have a lower surface pressure than tires which reduces the impact of vehicle load on soil density. The longer footprint of the tracks also improves mobility in wet conditions by allowing the track to move over soft spots with little to no sinking, further protecting the soil. The tracks can help reduce the amount of surface area compacted, as well. Using a combine harvester as an example, Dubuc explains that to get a sufficient footprint to support a load in wet conditions, the harvester would require wide dual tires. However, each pair of tires leaves a 60-inch wheel mark whereas the tracks only leave a 32-inch mark. “The result is 40% less trafficked area, and tracks still offer 3.5 times more contact area,” says Dubuc.

With this capability, tracks are better able to meet the narrow transport regulations in regions such as Europe. Additionally, the narrower footprint makes it easier for equipment to move through crop rows without disturbing the soil or the crops themselves.

The growing use of tracks can also be attributed to their increased affordability. Due to factors such as enhanced production technology, the price of rubber tracks has decreased 30 to 40% in the past five years, says George Valev, Director of OEM Accounts at McLaren Industries Inc. (company information, 12015452). The improved affordability will help the tracked equipment industry continue to grow worldwide over the next few years. “Exceptional growth can be expected in the agricultural sector as the manual collection of rice in Asia has increasingly been replaced by tracked harvesters,” he says. “In the industrialized countries, more affordable, fuel efficient and less ground-compacting track-equipped farm tractors are replacing the tire-equipped [ones].”

“It has often been said that tracks are a complement to tires, a solution to the extreme. I would agree with that statement,” says Dubuc. “What explains the growth in tracks is that the extremes—extreme load, extreme traction, extremely narrow widths—are now the norm.”

Mitas’ PneuTrac concept (learn more, 11222684) brings together the best of both worlds in traditional pneumatic tires and rubber tracks, says Mabin. The PneuTrac footprint is 53% larger than a standard tire and provides a higher tractive force. “This ensures gentle ground handling with much lower and improved distribution of pressure on the ground,” he says.

How tire and track manufacturers will find the balance between reduced soil compaction and increasing equipment loads is yet to be seen. But for now, Mabin says for tire manufacturers, low pressure tires such as IF and VF technology will be one of the main methods of achieving that balance.

The increasing trend of tracked agricultural equipment was most apparent at the Farm Progress Show 2014 (event information, 10207424). Both Case IH and New Holland Agriculture introduced tractors featuring tires at the front and tracks at the back. Almost every OEM at the show had at least one piece of machinery on display equipped with tracks. And during an event in early August, John Deere also gave a sneak peak of its prototype four-track tractor.

While offering the benefit of reduced soil compaction, the tracks also make it easier for farmers to get into wet fields sooner than they could with just tires. New Holland said farmers using its T8 SmartTrax tractor were able to get into their fields three to four days sooner, enabling them to harvest their crops sooner and thus be more productive (learn more, 12000313). Combining the tracks and tires makes turning at full power in wet conditions easier, as well, for further productivity and safety improvements.

Visit www.oemoffhighway.com/12002814 to read more about the New Holland and Case IH tracked machines, as well as the other tractor and tire introductions from the Farm Progress Show 2014.