An agricultural OEM and tire manufacturer team up to create a vehicle that can withstand the extreme environmental conditions of Antarctica. 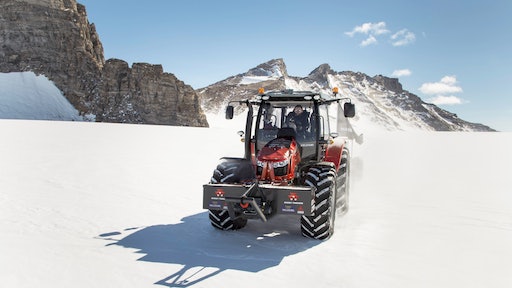 Severely cold temperatures led Massey Ferguson to use thermal protection on the cab floor to ensure performance of the electronics, as well as on the liquid-free battery.

In November 2014, Dutch adventurer and filmmaker Manon Ossevoort set out to drive to the South Pole in a tractor. For the project, known as Antarctica2, Massey Ferguson donated an MF 5610 tractor that was modified to meet the needs of operating in harsh weather conditions.

The cab of the tractor was one of the key areas where changes were made to ensure the comfort and safety of Ossevoort. Massey Ferguson placed an additional heating system in the cab and added thermal protection to the windows. Polycarbonate windows were used instead of glass because the material is more resistant to wind and thus less likely to break due to the harsh weather conditions. The rough terrain of Antarctica also prompted the company to add an extra secure four-point seatbelt for safety and comfort.

Severely cold temperatures anticipated during the expedition prompted the company to design a cab floor with thermal protection. This ensured a moderate temperature within the cab so performance of the various electronics would not be affected. Thermal protection was also used on the liquid-free battery to guarantee its performance. Liquid-free battery technology was used because battery liquid is banned in Antarctica in case of accidental leakage that could cause environmental damage.

While no changes had to be made to the engine itself, Massey Ferguson did add Webasto heating technology and glycol tubes around the engine and transaxle to assure the engine oil maintained its temperature and would not become too viscous which would prevent engine starting. A metallic protector was also developed to go around the engine and transaxle to conserve their thermal energy. For increased air filtration to the engine, the company changed the grille on the nose of the tractor which allowed the incorporation of larger air intakes. The shape was also changed to avoid ice formation.

Massey Ferguson partnered with Trelleborg for the development of the tires that would be used on the Antarctica2 tractor (learn more, 12013326). Trelleborg was tasked with creating a complete set of multi-purpose wheels which included both tires and rims. “We decided to join Massey Ferguson in this adventure because the demanding conditions of Antarctica require flotation at extremely low pressure, grip and traction, as well as reduced fuel consumption,” says Piero Mancinelli, R&D Director at Trelleborg Wheel Systems. And because farmers face many of the same requirements, he says the lessons learned from this project will help the company further maximize flotation, grip and fuel efficiency for future agricultural tire designs.

For Antarctica2, Mancinelli says the company wanted to use a tire that was suitable for normal field operations instead of creating a special one just for the expedition. It knew that in order to cope with the varying temperatures, ice and snow conditions of Antarctica, the tire would need to provide good flotation for enhanced pressure distribution on the ground and traction to ensure reduced fuel consumption, higher grip and increased drive comfort and handling. “With these specific challenges in mind, we turned to our ProgressiveTraction tire which is characterized by a special double lug that operates on the ground at different times, progressively releasing higher traction when and where required,” he says. “The double lug also provides the tire with better floatation capability at low pressure.”

For operation over the soft ground found in Antarctica, Trelleborg adapted the tread pattern of the ProgressiveTraction tire (product information, 11135225) by reducing its height and rounding the tread at the shoulder. This design moves less snow as the tire runs over the ground, therefore providing easier maneuverability.

The company also created a special tire carcass capable of performing at pressures as low as 4.2 psi. In addition, a special tread shape and surface with more roughness added to it were implemented to provide better grip on the ice and prevent lateral slippage. “The ProgressiveTraction also allows a wider footprint and better self-cleaning. So this technology was the best candidate for the expedition, where floatation on the snow was necessary while keeping grip and having the lowest possible fuel consumption,” says Mancinelli.

Due to the need for operating at pressures as low as 7 psi, Trelleborg modified the tire rim by creating a special internal hump to prevent the risk of bead movement, eliminating the chance of slippage or rim roll-off.

Mancinelli says the most challenging aspect of the project was ensuring the tires were capable of handling a speed of at least 15 mph on soft, snow covered ground while simultaneously maintaining grip, flotation and low fuel consumption. “Also challenging was to assure the tire integrity at such a low pressure as 7 psi,” he adds. The company’s background in the forestry business helped provide some advantages in selecting the best solution, as there are often extreme environmental challenges to overcome in that application, as well.

Also beneficial to finding the final solution was the cooperation between Trelleborg and Massey Ferguson. Both companies worked closely together while testing and validating various design options. Mancinelli says the companies did two sessions of real-world testing in Iceland, as well as a cold chamber test at -40 F to see how the tractor and tires would manage in such cold weather conditions.

Having worked together on other projects in the past, the companies were able to benefit from familiarity with one another, as well. “Trelleborg and Massey Ferguson share the same vision about modern farming, focusing on efficiency and sustainability of farmer operations,” says Mancinelli, which enabled them to achieve the goals necessary for the Antarctica2 project.

In 1958, Sir Edmund Hillary led an expedition to the South Pole using Massey Ferguson tractors. For the trip he used three specially adapted TE20 tractors fitted with tracks. His successful journey to the South Pole made him the first to do so using a motor vehicle.

Manon Ossevoort completed her 5,000 km journey across Antarctica in December 2014. According to a press release from Massey Ferguson, upon completion of the trip the MF 5610 became the first standard farm tractor equipped with tires to reach the Geographic South Pole overland. Over the course of 28-day trip, Massey Ferguson says only a few running repairs were needed while the engine clocked 760 hours of operation which is more than most farms would do in two years of normal work.