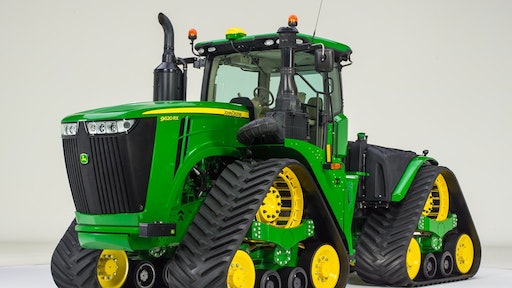 Changing field conditions in many parts of the world has been an integral factor in the rising use of track systems on agricultural equipment. “In particular, when you look at areas like the Red River Valley and Western Canada in the past 10-15 years, we’ve gone into a wetter cycle,” says Colin MacDonald, Product Manager for the 9 Family Tractors at John Deere Ag and Turf Division. “You see much wetter, muddier field conditions where traction tends to be limited.”

In addition, the size of farms has grown and with it the size of the equipment and implements farmers are using. This larger equipment makes turning more difficult in the muddier conditions, says MacDonald, necessitating the four-tracked machines, which is why John Deere introduced its 9RX four-track tractor in August 2015. “In those specific conditions, a four track articulated machine tends to be the most effective way to put power to the ground and pull equipment,” he says.

While the company has had two-track options in addition to its wheeled tractors, it felt there was enough demand from customers now to also offer a four-track option. “We believe having the four-track in our portfolio, as well as the two track and the wheel tractor [lets] customers choose the one that best fits their operation and their needs,” says MacDonald.

For the 9RX, John Deere chose to use a larger sized undercarriage than is typically found on four-track tractors to help improve reliability. MacDonald says it’s about 20% larger than the next largest undercarriage design in the industry. “By going 20% larger on an undercarriage, all of our components are larger and as a result they’re turning more slowly, building up less heat at the same ground speed and dissipating that heat more effectively which is going to lead to longer component life,” he explains.

The ability to have a larger undercarriage on the tractor was due in part to John Deere’s use of an upswept axle. This axle is the casting which goes from the differential case to the drive sprocket of the undercarriage and houses the gear system that enables use of a high drive position. Instead of driving at the same position as a wheeled tractor like other machines on the market, MacDonald says having the axle come up from the differential case allows the height of the drive point to be raised so that the drive sprocket is mounted higher. Doing so provides more space for the use of a larger diameter drive sprocket as well as for the larger undercarriage.

MacDonald says the drive sprocket is 39-1/2 in. (100.3 cm) in diameter, about 10% larger than the next largest used in the four-track tractor market. Having the larger drive sprocket enables a large number of the drive lugs within the sprocket to be engaged or meshed with the sprocket which reduces the amount of stress placed on individual lugs. This in turn helps maximize the lifespan of the drive belts, as well, and provides more effective drive capabilities.

In addition, he says using two mid-rollers instead of three enables the use of wider diameter mid-rollers which helps improve wear life because they are turning more slowly, and thus building up less heat.

According to MacDonald, the placement of the mid-rollers and idlers is one of the unique features of the track system. By raising the front idler 20 mm (0.79 in.) and the rear idler 10 mm (0.39 in.) higher than the mid-rollers, the tracks can achieve a virtually flat footprint, distributing the tractor’s weight more evenly while preventing vibration from being heard or felt within the cab, especially at higher speeds. “We played around with how to optimize the height at which we raised the idler to really find that balance point between going low enough to more evenly distribute the undercarriage across both the mid-rollers and idlers and yet pull it up enough to allow the tractor to climb and reduce any vibration coming up from the undercarriage,” explains MacDonald.

Keeping the idlers as low to the ground as possible allows weight to be more evenly distributed across the whole footprint of the undercarriage and provide better traction by using the tread bars on the track more effectively across the whole length of the undercarriage. If the idlers were raised any higher, MacDonald says weight would then be concentrated on the mid-rollers which would inhibit this capability, as well as the mid-rollers’ wear life. Evenly distributing weight over the entire undercarriage also ensures the track’s footprint is being used more effectively to help reduce overall ground pressure.

The front and rear idlers are a solid steel design which prevents the buildup of debris and mud common with the spoke idlers often used in other systems. MacDonald also notes steel is more durable than the cast typically used for spoke idlers and helps reduce the weight of the track system.

Additional features of the track system include a sealed cartridge hub design which makes it easier to change out mid-rollers if necessary because the hub is mounted separately from the mid-rollers. MacDonald says the hub is what the company calls a ‘lubed for life’ design, meaning it can run without ever needing an oil change unlike other designs that require one every 1,500-1,800 hours. And unlike many other systems in the market, the mid-rollers and idlers do not require a daily oil level check but rather one every 1,500 hours.

Meanwhile, the track’s closed loop tensioning system maintains tension of the undercarriage without the need to constantly have oil flowing into it. Instead, the system employs a hydraulic cylinder mated to a nitrogen-filled accumulator. When belts need to be tensioned, a jumper hose connects an SCV (selective control valve) on the back of the tractor with a coupler on the hydraulic cylinder to flow oil into the cylinder until the system reaches 2,900 psi (200 bar). Once this occurs, the system is left alone to let the accumulator equalize to ambient temperature (about 5 minutes), at which point the track belt is fully tensioned.

MacDonald says the system has a much higher track tension than what is found on competitive systems; actual track tension is 16,000 lbs. (7,257.48 kg) which is about 60% higher than what is typically seen in the industry. Industry standard is closer to 10,000 lbs. (4,535.92 kg), he says. “By running higher track tension, we’re going to reduce the tendency of the belt to stretch enough or to want to stretch and skip a drive lug when you hit a really traction limited situation,” he explains. “The other thing we’re going to do is maintain the surface tension underneath the undercarriage to reduce any ripple or wave in the belt as it passes over the idlers and mid-rollers, which if the belt weren’t tensioned as high and started to ripple there could be additional parasitic losses, reducing effective power to the ground.”

Included on the 9RX is a four bar parallel plane suspension system designed to ensure optimal operator comfort. Jointly engineered by John Deere and ZF, it uses oil over coil shocks on all four corners to independently suspend the cab. Across the front of the suspension is a torsion bar placed between the two front shocks to remove side-to-side roll of the cab. Behind the torsion bar are two sets of parallel links which hold the front of the cab to the frame of the tractor and remove the fore and aft movement of the cab. In addition, the parallel links are mounted with rubber bushings to help absorb and mitigate any vibration coming through the front of the tractor and isolate the cab from that vibration. At the rear of the cab is a pan hard rod designed to take sway, or side-to-side movement, out of the cab.

By taking out movement on three different axis—sway, roll, and fore and aft pitching—the suspension provides near-vertical motion for the operator. “Whatever that tractor is running across, hopefully the only movement the operator feels is the vertical up and down movement of the cab soaking up those impacts,” says MacDonald. “The cab features +/-50 mm of travel, so essentially 2 in. of travel up and 2 in. of travel down, and that’s the largest range of travel on a suspended cab in the ag industry at the moment.”

The operator cab itself is a CommandView III cab, used on all 9 Series tractors, featuring a 40-degree swivel seat to help reduce strain when viewing rear implements. It includes the Generation 4 CommandCenter operator display mounted on the right-hand side of the driver’s seat for comfort and easy accessibility to tractor controls and settings. The touchscreen display is set up to operate similar to a tablet or mobile phone, making it easy for any driver to use.

Additionally, tools including JDLink Connect information management and AutoTrac guidance are integrated into the tractor to help operators stay as productive and efficient as possible.

For all of its Tier 4 Final 9 Series tractors, including the 9RX, John Deere redesigned the hydraulic system, changing the entire architecture of how oil flows through the tractors. The first step was placing the oil reservoir on the right-hand side of the machine at ground level for easier re-filling by customers; on Tier 4 Interim models it was raised up by the corner of the cab. Additionally, MacDonald says the company moved to higher displacement pumps with standard flow of 90 cc, delivering 58 gpm (219.55 LPM) of maximum hydraulic flow. He says the company also offers a high flow system using a second 85 cc pump delivering another 57 gpm (215.77 LPM) of maximum hydraulic flow for a total of 115 gal. (435.32 L) of hydraulic flow to the tractor. “Our high flow ag tractors are designed with a parallel hydraulic system so you can separate your constant flow and high flow implements and run them on separate flow pumps,” he explains.

Like its other 9 Series counterparts, the 9RX also includes the e18 PowerShift transmission with Efficiency Manager for smoother shifting. An automatic mode for the efficiency manager feature helps increase fluid efficiency and operator productivity, aiding fuel savings. Depending on the model, a John Deere PowerTech PSS 13.5 L engine or Cummins QSX15 engine is used to power the tractor.

Ag may be down, but innovation continues to grow