Ag may be down, but innovation continues to grow

The Farm Progress Show 2015 once again provides a showcase for the latest developments in the agricultural industry. 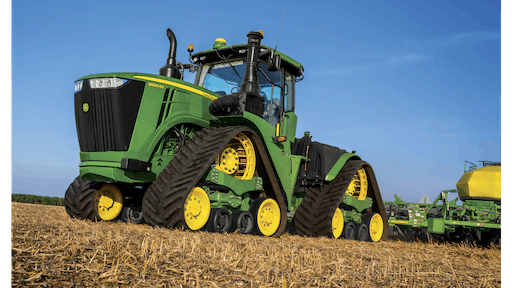 Though the agricultural industry is currently facing a cyclical downturn, that hasn’t stopped OEMs and component manufacturers from flexing their innovation muscles, as was evident once again at this year’s Farm Progress Show.

Couldn’t make it to this year’s show? Check out our media gallery for some of this year’s highlights.

Held each year alternating between Boone, IA and Decatur, IL, the Farm Progress Show has grown to become one of the United States’ largest trade shows. In early 2015, it tied for the number one spot along with CONEXPO-CON/AGG on the 2014 Top 250 US Trade Shows list compiled by the Trade Show News Network.

With it being such a large show for the industry, many manufacturers use it as an opportunity to introduce and highlight their latest product developments. AGCO and Case IH were among those exhibiting new model year 2016 equipment featuring various updates to aid customer productivity and efficiency. Machines introduced by AGCO at the show included the new 2700E Series tractor which is capable of meeting Tier 4 Final emissions requirements without the use of a DPF to maximize uptime for customers, as well as WR9800 Series SP windrower with RearSteer option which stabilizes the rear axle for improved stability, and thus operator comfort. The company says this technology is typically found in combines, and that it is the first time it is being used in a windrower application. In addition, the RearSteer option aids transportability, enabling up to 24 1/2 mph top speed without a header, and 20 mph when towing a draper head.

More AGCO launches from the show:

Case IH’s Jim Walker noted during the show that it will take some time for the industry to get out of the downturn due in part to the need to remove used equipment from the market, and the limited re-marketability of some specialty equipment. However, he said the company continues to invest in new technologies, many of which were introduced at the Farm Progress Show. Among them was the new Optum Series tractor featuring ISOBUS Class 3 capabilities which enables an approved implement to control tractor functions such as ground speed to help optimize efficiency.

New Holland also introduced ISOBUS Class 3 capabilities in its new T7 Series models which made their debut at the Farm Progress Show.

Additional improvements Case introduced for its new models included standard LED lighting for improved visibility, as well as a cross flow cleaning system for the 140 Series combines which automatically detects and compensates for grain loss when traveling on uneven terrain.

Once again this year, tracked equipment caught the attention of many attendees during the show. Case highlighted not only its newest models featuring tracks, but also one its original track concept tractors, the 9300 Series Quadtrack Steiger which was introduced at the 1996 Farm Progress Show. Since that time, the use of tracks on agricultural equipment has become increasingly more prevalent as soil and environmental conditions have changed; farmers are needing to get into their fields sooner, requiring drivetrain solutions which provide better traction and floatation to easily maneuver through the often wet conditions.

John Deere exhibited its new 9RX four-track tractor which was introduced the week before Farm Progress Show during a live webcast launch. Designed for broad acreage farmers, the specially designed tracks on the 9RX feature a larger articulated footprint for better traction while the spacing of the rollers reduces shocks when traveling over rough terrain to ensure optimal operator comfort.

Many of the track and tire manufacturers emphasized the value their products could offer in reducing soil compaction, a key factor for many farmers again due to changing field conditions, as well as the ever-increasing size and weight of agricultural equipment. Goodyear/Titan Tire introduced several new sizes of its LSW tires which enable users to carry 40% higher loads at the same inflation pressure as standard tires, or carry the same load at 40% lower inflation pressures. The company says it is working to collect data and educate OEMs on the benefits LSW technology can offer farmers so that the OEMs will consider incorporating these types of tires into their initial equipment designs, and thus not have to redesign for the tires late in the design process.

For Michelin, its IF and VF were the “theme” for its exhibit with the aim of demonstrating to farmers not only the soil compaction benefits of this tire technology, but also the potential ROI of using these tires. As part of its exhibit, the company featured a Case IH tractor with a standard tire mounted on the left-hand side inflated to 21 psi and a VF bib tire on the right-hand side inflated to 13 psi. Behind the tractor was a small area of dirt onto which the tractor was backed over to provide attendees with a visual of the rut difference between the two tire types.

Camso, which recently changed its name from Camoplast Solideal in order to better emphasize a singular brand and the company’s goal of being a one-stop shop for the off-road market, highlighted its Profit from the Ground Up concept during the show. Martin Lunkenbein, Business Line Executive Director, Agriculture, said the concept is designed to help farmers improve yield by putting them at the center of the decision-making process when Camso develops new products. The company wants to focus its efforts on only bringing products to market that farmers, and OEMs, want, and so it has been working closely with both to ensure it is doing so. With its new Profit from the Ground Up concept, it is also working to move away from using general terms such as soil compaction that don’t always mean as much to customers, but instead highlighting ROI which is a more tangible benefit for customers.

Read about even more news and product launches from the show:

CLAAS invests in Shredlage technology for the JAGUAR forage harvester