Foresight into the eventual need for an emissions-free underground mining utility vehicle caused a seven year waiting game while technology caught up with the idea. 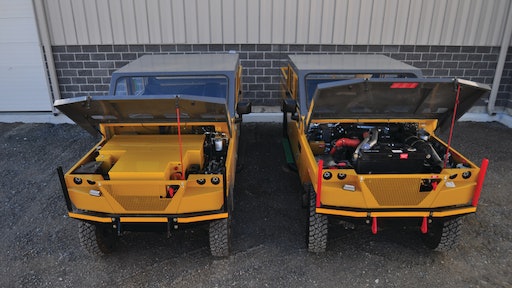 There can be a downside to being a forward thinker, namely waiting around for the rest of the world to catch up with your vision. Back in 2004, Industrial Fabrication Inc. of Sudbury, Canada (company information, 11553841), saw the eventual need for an emissions-free mining utility vehicle, and by 2011 the necessary technology had matured enough for its engineering team to finally pursue the endeavor.

“In 2011, we decided to create the first battery-electric vehicle purpose-built for the environment in a hard rock mine,” says Dave Schmidt, Engineering Manager for Industrial Fabrication. “The result is the [UT150-eMV] we have today.”

The development of the electric vehicle was based on Industrial Fabrication’s experience and knowledge of the requirements of underground utility vehicles in the mining industry. Its existing UT99C utility truck was the logical platform to base its emissions-free vehicle on. When entering into development of a new vehicle, restrictions and limitations of the industry must still be taken into consideration, such as cost and performance. “The cost pressures on mining utility vehicles are chiefly purchase price, operating cost (maintenance and fuel), and ventilation requirements,” says Schmidt. “We believe the time has come when the electric drive system provides enough benefits by reducing maintenance, fuel and ventilation costs to outweigh the increase in purchase price. In addition, every passing year brings more focus to reducing emissions and increasing operator safety.”

It was learned early on that existing off-the-shelf components would not meet the performance requirements of the modern mining world, so custom-built components were necessary to make the vehicle a reality. The technologies developed are scalable, allowing drive systems to be tailored for different applications.

The rugged frame from the UT99C needed minor design modifications to accommodate the changes made to the powertrain which included removing the diesel engine, as well as the four-speed transmission and torque converter. The diesel engine was replaced by a 150 kW brushless, permanent magnet 400-volt AC electric drive motor that was specifically designed for the UT150. The electric drive system (EDS) is fully-electric with on-board charging, regenerative braking and uses high voltage for efficiency.

The motor’s liquid cooling system ensures the motor will not overheat or be subjected to dust and debris compromising its performance when clogged in an air vent. Air-cooled motors force air over copper windings which expose them to the harsh environments in which mining vehicles operate. The liquid-cooled motor design also allowed it to be more compact and lighter while delivering higher power than a comparable air-cooled system. The motor can also be submerged or splashed with water without issue. The motor is directly coupled to an industrial two-speed transfer case to deliver power efficiently to the axles. The Minecat UT150-eMV has been ramp test certified and has a fully enclosed SAHR wet braking system at each axle.

The electric motor is powered by a system of batteries that fits entirely under the hood, so no cargo space is lost. The system is scalable to suit the particular needs of a mine and has a projected life span of 10 years. The battery pack capacity is changed by simply adding or removing modules, and the cells are 100% recyclable.

The final key component to complete the electric drive system is the on-board battery charger, which can operate in a variety of configurations, including 220V single phase; 208V three phase; and 600V three phase for the quickest charging option. Since the charger is always with the vehicle, multiple charge points can be distributed throughout the mine.

During the development of the Minecat UT150-eMV design, several additional benefits were achieved beyond the zero-emissions goal. For example, the EDS has over 1,000 fewer parts than the diesel system it replaced; and fewer parts equals fewer opportunities for failed systems and service needs.

The vehicle design also placed the battery system under the hood so as not to impact the rear cargo area. “This is important,” says Schmidt. “We have a large library of proven machine configurations which are all available as part of our eMV electric line. These configurations have been developed for our underground customers over the years by responding to their specific needs. We wanted the weight to be as close to the weight of the diesel as possible, and we surpassed that goal, ending up with the UT150-eMV 40 kg lighter than the diesel counterpart.”

The electric drivetrain was developed in conjunction with a North American partner with specific expertise in electric drivetrain systems. “Our baseline surface testing, combined with the data collected at underground mining operations in Sudbury, provided the benchmark data to design the EDS,” Schmidt says. The data was collected on a diesel UT99, the same mine-proven platform the 150-eMV utilizes. “The data we collected is unique in the industry and may be the only data of its kind in the world. We further mitigated our risk by partnering with energy simulation specialists at the top of their field to analyze the data. These partners have high profile clients such as General Motors, and the U.S. Department of Energy.

“The first prototype now has thousands of kilometers of surface and underground mine testing. We have tested in very cold conditions, hot temperatures, high humidity, wet conditions and dusty environments. The prototype has exceeded our expectations with regards to reliability and performance.

“During our underground testing phase, we determined that the duty cycles of utility type vehicles vary widely according to their intended function. We are able to tailor our scaleable drive system for the maximum benefit of the end-user. During testing we tuned the EDS programming for maximum range and performance, and made improvements to the charging system to accept greater variations in mine power. The second prototype incorporated all the changes made to the first UT150-eMV, as well as a 40% improvement in the maximum available torque.”

On the outside, the UT150-eMV looks very much like its UT99C predecessor. But on the inside, this emissions-free vehicle provides a quieter, safer environment in underground mining operations. In the end, Industrial Fabrication’s team of inspired engineers was patient to ensure the vehicle they envisioned was created to the best of their ability and with the capabilities demanded by a demanding industry.

ZF will acquire all outstanding shares of WABCO for $136.50 per share in an all-cash transaction for an equity value of over $7 billion.
ZF Commercial Vehicle Control Systems Division (formerly WABCO)
June 28, 2019

Intellipark prevents rollaways through interlocks installed in the cab which engage the parking brake electronically if the driver leaves the cab without doing so.
Bendix Commercial Vehicle Systems LLC
March 18, 2019
Brake System