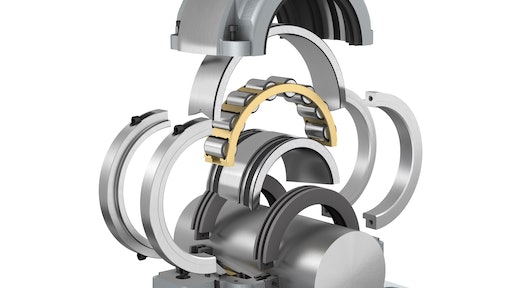 SKF acquired Cooper Roller Bearings Co Ltd in 2013 as part of the U.S.-based Kaydon Corporation, Cooper's parent company at the time. Following a period of consolidation within SKF, it has now been decided that all Cooper Split Bearings ranges will be marketed under the name of SKF Cooper going forward.

SKF Cooper products will continue to complement the growing SKF portfolio of complete solutions for the marine, mining, quarrying, construction and energy sectors. In addition to the brand name change, the channels to market for SKF Cooper products, including responses to customer enquiries, product supply and after-sales support, will be handled on a global basis through local SKF sales outlets going forward.

SKF Cooper split roller bearings can be fitted, removed and inspected without having to dismantle surrounding equipment, providing savings in terms of reduced maintenance and downtime. The products include both split cylindrical roller bearings and split double row tapered roller bearings, the latter with the ability to take axial loads in either direction. Both are housed and sealed in special swivel cartridges, which are suitable for mounting in pedestal or flanged outer housings.

The cartridges have a spherical outer surface that fits into a conforming surface in the mounting unit rather like a ball and socket joint; any shaft misalignment tends to move the cartridge, seal and bearing together, maintaining the seal on an axis parallel to the shaft. This configuration allows extremely close tolerances to be maintained between the housing and the shaft, delivering a sealing performance that is recognised as one of the best in the anti-friction bearing industry.

As well as their complementary product ranges and reputations for engineering excellence, Cooper and SKF have one other thing in common: both mark 1907 as a particularly momentous year in their respective histories. 1907 was the year that Cooper's founder, Thomas Cooper patented the world’s first split rolling element bearing, and in that same year Sven Wingquist invented the first self-aligning bearings and founded the Svenska Kullagerfabriken company – nowadays more commonly known as SKF.

It was created to complement the self-aligning ball bearing due to its ability to accommodate misalignment under heavy loads and can be used in a wide range of applications.
SKF USA Inc.
April 16, 2019

A completely new version of the online SKF Bearing Select tool helps users choose a bearing based on a range of operating parameters, and can generate automatic results in less than 1 minute.
SKF USA Inc.
April 1, 2019
Follow Us