Argonne researching use of one-atom thick graphene for friction reduction

Researchers at Argonne National Laboratory are investigating the use of one-atom thick graphene to reduce friction. 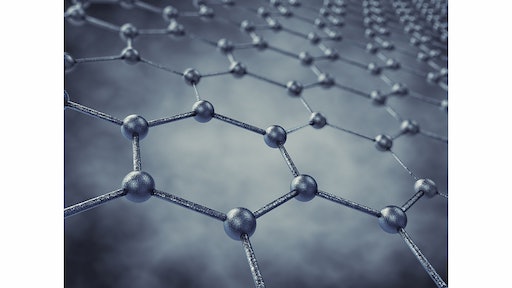 The hexagonal structure of Graphene makes it well suited for use as a lubricant.

Researchers at the U.S. Deptartment of Energy's Argonne National Laboratory are investigating the use of a one-atom thick graphene layer as a means of reducing friction.

Placed between a steel ball and steel disk, the researchers found that a single layer of the graphene lasted for over 6,500 wear cycles. Argonne says this is a major improvement over conventional lubricants such as graphite or molybdenum disulfide.

According to Nanoscientist Anirudha Sumant, one of the researchers on the project, graphite really only works well in humid environments while molybdenum disulfide is only suited for dry environments.

Graphene's two-dimensional structure, however, gives it the advantage of being able to bond directly to the surface of stainless steel. This makes for a perfectly even surface that does not allow hydrogen atoms to penetrate the material. Previous research from Sumant and his colleagues demonstrated that a few layers of graphene works well in both humid and dry environments, meeting the challenge of finding a single, all-purpose lubricant.