The Tribine Harvester features four aligned low ground pressure tires to reduce soil compaction and a 1,000 bushel grain bin to eliminate the need for a grain cart and tractor to run parallel to the machine in the field. 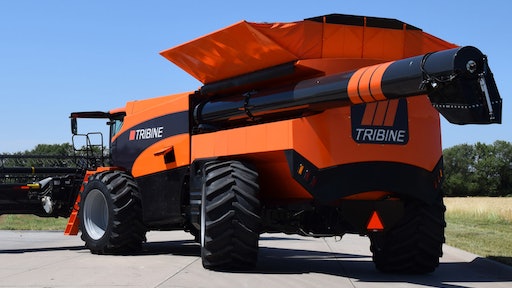 On August 4, the entire team at Tribine Harvester LLC celebrated as the first all new Tribines left the final assembly area at the factory in Newton, KS. Tribine is the first fundamentally new harvester architecture since WWII, with innovation in many different areas of the design, to help farmers operate in a more productive and efficient way.

The new Tribine rolled off the assembly floor under its own power and began live testing in a wheat field, just 18 months after the company brought together a world-class group of engineers. “The future of harvesting is now,” explains Ben Dillon, the President of Tribine Harvester. “The Tribine performs all of the functions of a combine, only better and faster. Incorporating a 1,000-bushel grain bin, the Tribine can eliminate the need for a grain cart and tractor running parallel with the combine.”

Reducing compaction is a key benefit of the Tribine. Four aligned low ground pressure tires, with center articulation and pivoting rear axle, ensures that the Tribine leaves only one trail. Other machines use up to six tires of varying widths and spacing, creating multiple paths and more compaction of the soil.

A significant efficiency improvement is the world’s largest threshing and cleaning system, providing up to twice the cleaning area of any other harvesting machine, regardless of color. According to Bob Matousek, Tribine’s Vice President of Engineering, “The capacity of major importance to producers is the crop throughput rate. Tribine’s solution to this is a large diameter rotor with 270 degree concave wrap, which feeds a cleaning system of considerable width utilizing an advanced pneumatic cleaning method. This results in a superior balance of separation and cleaning capacity.”

Speed of harvesting is improved by the ability to unload the 1,000-bushel grain tank in less than 2 minutes and the 500 gallon fuel tank capacity enables 24 hours of continuous operation.

While it is new to the market today, the inventor - farmer and company President Ben Dillon - has been working on this concept for nearly 20 years, and developed four generations of machines before going into production with the machine we now know as the Tribine. In January 2015, he assembled a group of engineers, all of whom have experience in designing and manufacturing combines for other OEMs, establishing Tribine Harvester LLC in Newton, KS. As Dillon admits, “It took me 20 years to get here, perhaps I am just a slow learner.” Before TRIBINE’s development, combines consisted of a reaper and a thresher. However, as combines grew bigger, with higher capacities and higher yields, grain carts had to grow bigger, reaching over 1,000 bushels. Grain carts and combines were united to the point of being dependent on each other, with the grain carts being pulled by tractors and adding additional tracks and compaction to the soil with every pass and trip to the semi-truck. Published studies on the impacts of compaction have shown that compaction can reduce grain yields from 3-10%. The TRIBINE addresses this issue and many more.