The BELAZ-75710 dumper truck powered by a Siemens AC traction drive system has earned an entry in the Guiness Book of Records as the world's largest mining two-axle all-wheel-drive dump truck. 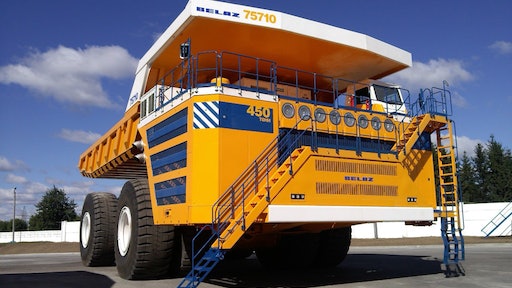 BELAZ-75710, the world’s largest mining two-axle all-wheel-drive dump truck with weight-carrying capacity of 450 metric tons demonstrated the performance worthy of an entry in the Guinness Book of Records. The new vehicle rolled out of the BELAZ plant in late 2013 is being field tested as the biggest machine of its class with a record breaking capacity.

As opposed to its predecessors, the new dumper is provided with eight wheels, each designed for about 100 tons of load. Therefore, Siemens traction division experts chose to develop a reliable and powerful all-wheel drivetrain with four electrical machines. The use of the all-wheel gear has opened up new possibilities of distributing tractive effort to both axles. Further, in case of failure of one of the driving gears, an emergency mode can be activated, which would enable the dumper to get to the service station without being towed. The traction motors for the electric gear were manufactured at Siemens facilities in Nürnberg. The project was completed in a comparatively short term: the development process from ordering to commissioning took less than two years.

Siemens has been developing drive systems for mining dumpers for many years. Currently, the company supplies BELAZ OJSC with AC traction electric drives for 240 ton and 360 ton dump trucks.

BELAZ-75710 is the first vehicle in the class of super-high-load trucks having a weight-carrying capacity of 450 tons. It is over 20 meters long, nearly 10 meters wide and 8 meters high. The turning diameter is about 20 meters. The new dump truck has embodied the latest technological solutions ensuring its high efficiency, reliability, maneuverability and smooth running as well as the driver’s comfort and safety. The vehicle maximum speed is 64 km/h. BELAZ-75710 is in high demand in the mines of Kuzbass region of the Russian Federation, in certain coal strip mines of Chile and North America. The first dump truck is due to set off to one of the open mines of Kuzbass coal field.