Alliance 390 flotation tries were used by the Extreme Events team to help their truck traverse rough terrain and scale the world's highest volcano. 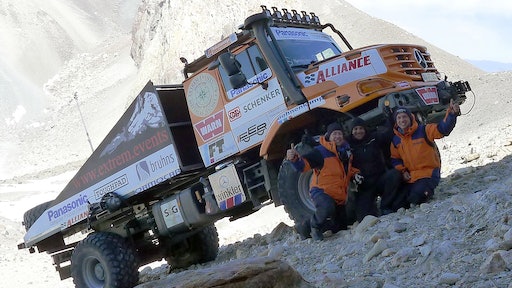 A triumphant message from the summit of Ojos del Salados in the Chilean Andes—21,899 ft. above sea level—announced a world record for a climb by truck. Riding on rugged Alliance 390 radial flotation tires from the Alliance Tire Group (ATG), a German team scaled the world’s highest volcano, which is also South America’s second-highest peak.

The Alliance 390 flotation radial tires were a natural choice for an expedition facing a wide variety of conditions, from rock to snow and ice. The 390 was developed to excel both in the field and on the road, and is widely used around the world for heavy agricultural machinery as well as for trucks carrying crops from harvest sites to distant storage or processing facilities.

ATG and Germany-based Bohnenkamp, Europe’s leading marketer and wholesaler of agricultural tires, sponsored driver Martin Jeschke and his Extreme Events Team from Limburg, Germany, in their quest for the world record.

ATG and Bohnenkamp supplied 560/60R22.5 Alliance 390 flotation radials to the team, which mounted them on an 11-metric-ton Mercedes truck.

“Awesome tires that have climbed across loads of sand and rock without so much as a squeal during the test runs,” reported Jeschke during the team’s first trials in Chile.

On November 30, 2014, the team piloted its truck to the base camp for four days of preparation to scale the volcano. On December 5, they set off on a two-day quest for the record.

At 8:00 pm the next day, Jeschke texted from the final push: “Truck runs like a clockwork, tires eat up ice and sand.” Shortly after midnight, the message arrived from the summit: “The record is broken! Truck at 6,675 m, no truck ever ventured higher!”

Upon returning to the base station, Jeschke described the adventure.

“The performance delivered by the vehicle and the Alliance tires is an absolutely fantastic feat and lacks any comparison,” he said. “The performance of these tires was unbeatable! Ice, snow, extreme inclines and very sharp-edged rocks…these pneumatic tires dealt with all of it flawlessly, and none of the spare tires had to be used.”

The record-breaking truck has returned to Germany and will be displayed at several trade shows to celebrate Extreme Events’ achievement.