As Mitas continues field testing of its PneuTrac concept, it aims to launch the tire concept to the market by the end of 2017. 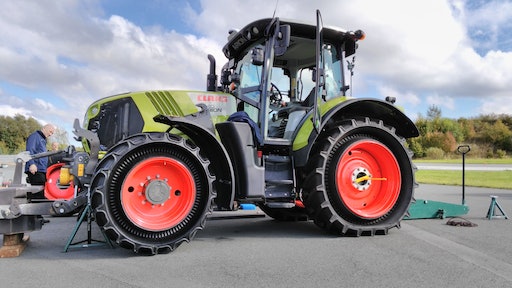 The development of the Mitas PneuTrac concept reached a new milestone with the start of field tests, which show the clear advantages of its larger footprint and better tractive force over standard but also IF agricultural tires. Thanks to positive progress in testing, Mitas has outlined its goals for further development of PneuTrac. The aim is to measure and compare characteristics of Mitas PneuTrac and rubber tracks during 2016 to clearly position PneuTrac among tire and track solutions offered on the market. Mitas' goal is to have all data needed for a successful market launch available by the end of 2017.

"The footprint and traction force of Mitas PneuTrac and rubber tracks are superior to those of traditional pneumatic tires. The next step is to compare PneuTrac and rubber tracks and see how close they will come,” says Andrew Mabin, Mitas’ Sales and Marketing Director. “We are getting closer to a clearer release date being available. Our goal is to launch PneuTrac in roughly two years.”

“The results of the first field tests that are under way in the Czech Republic give us a good feel for continuing the successful development of the Mitas PneuTrac concept,” says Mabin.

The slippage and traction force is measured under several modes of driving, and the result is the evaluation of traction force under the slippage that normally occurs during regular farm work (about 15%). The results are based on measurements conducted on July 22, 2015. Measurements were done by Research Institute of Agricultural Engineering, p.r.i.

“The field tests have so far demonstrated the clear advantages of PneuTrac over conventional tire designs and confirmed previously released lab test results. The most important PneuTrac benefits are a larger footprint, greater tractive force and also higher lateral stability at a lower inflation pressure when compared with the standard tire,” Mabin adds.

Mitas is developing its PneuTrac concept with its partner, Galileo Wheel Ltd. Mitas and Galileo had intensively worked for four years to build the PneuTrac concept from an idea to lab testing and finally to the field demonstration. The award-winning tire concept (EIMA 2014) had its public premiere in 2013 at the Agritechnica fair in Germany, where Mitas presented 280/70 R18 PneuTrac and 600/65 R38 PneuTrac. At the SIMA fair in Paris in February 2015, Mitas presented the 480/65 R28 PneuTrac, which was the third size of the revolutionary concept.