BKT's new facility in India includes a test track, state-of-the-art production equipment and housing for employees and their families. 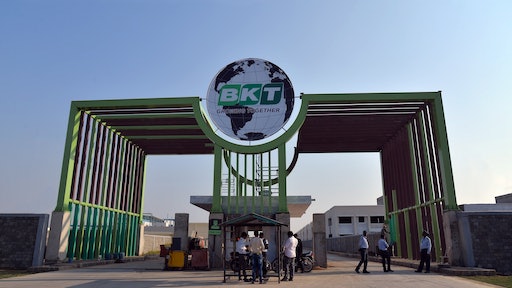 One hundred and twenty six hectares of barren desert with a handful of withered and windswept shrubs; no water, no electricity. This is how the area looked where BKT has created in a few years a real showpiece out of nothing thanks to a $500 million US dollar investment in a self-contained production plant representing state-of-the-art industrial equipment, infrastructure and facilities for employees. The site is located in Bhuj in the State of Gujarat at a distance of about 100 km from the Pakistani border and 60 km from the Port of Mundra on the Arabian Sea. After the start of construction work in January 2011, an 8 km long pipeline for drinking water as well as 13 km of electricity lines were laid. The first tire rolled off the production lines in March 2012, even if the entire project will not be completed until the end of 2016.

After reaching a daily production of 150 tons – approximately 50% of the maximum production capacity - the BKT Bhuj plant was inaugurated at the beginning of December 2015 in the presence of numerous guests from all over the world. Specific events took place involving on different occasions customers, distributors and partners. During the opening ceremonies, guests had the opportunity to give an admiring glance to the production units provided with modern compound mixers, complex equipment for the production of steel rings and new vulcanizing presses for large tire sizes. The tires currently produced in Bhuj include 22 sizes of the Maglift solid tire and various sizes of Liftmax LM 81 tire, both for forklifts, in addition to Portmax PM 93 in size 280/75 R 22.5 for straddle carriers, and the giant Earthmax SR 45 Plus tire for dumpers.

The Bhuj testing track, the one and only in India, has been projected for testing tire performance and driving comfort on different surfaces from uniform road conditions to rough terrain. Many Indian producers have already applied for using the BKT track for their tests. Close to this facility, the new R&D Center is being built for research on new polymers and tread compounds. On the other side of the complex, a thermoelectric power plant covers the needs for water vapor and electricity throughout the entire site. Enormous water collection tanks provide water reserves even in droughts.

“The primary resource for the growth and success of any business is its staff,” states Arvind Poddar, Chairman and Managing Director of BKT. Over 6 hectares of the Bhuj site – fully in line with this philosophy - a small town for the employees was built including modern flats for 406 families, a mall, a green area, a recreation center, a medical center, and a fire station. The fire brigade takes action even in case of emergencies outside the Bhuj plant. In addition, there are 90 rooms for university students who take part in an industry-university cooperation project.

Like all BKT plants, Bhuj has obtained the ISO 9001: 2000 Quality Certificate. As far as production parameters, quality control and environmental regulatory requirements are concerned, BKT adheres to the strictest international standards.

“The Bhuj production site is a milestone in BKT’s growth,” says Lucia Salmaso, Managing Director of BKT Europe, “not only for its high levels of technical and quality standards, but also because it is the BKT plant that is situated at the closest distance to a port - a decisive factor to speed up delivery time. Likewise, this is a great benefit for companies that have chosen BKT tires as original equipment.”

Alluding to the game of chess, Poddar illustrated BKT’s philosophy in his inauguration speech as follows: “There is a unique trait that distinguishes a true champion from a mere player: the versatility to adapt his/her strategy to the challenges entailed in each game. One move after the other, BKT has created and reached its objectives. Thanks to the new Bhuj production plant, the company is now ready to change the game acting as the 'game changer' on the global chessboard.”