Bendix Reports 2016 as Active Year for Corporate Giving and Volunteering 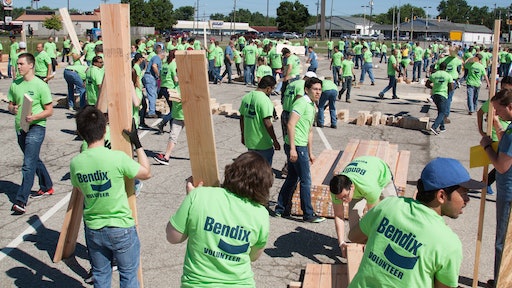 Activities included local-level employee-driven projects; community initiatives funded by Bendix; and programs supported by Knorr-Bremse Global Care. Global Care is a nonprofit organization founded by the Knorr-Bremse Group, Bendix’s parent company, to give those in need (through no fault of their own) a chance to lead more independent lives. In all cases, Bendix employees continued their long tradition of contributing time and talent to help the communities around them.

“We are incredibly proud of the efforts of our employees, and thankful as well for the support from Knorr-Bremse Global Care to carry out these initiatives,” says Maria Gutierrez, Director of Corporate Responsibility and Sustainability at Bendix. “Social responsibility is not only core to Bendix corporate values, but woven into our culture. Those values are displayed by the generosity of everyone from corporate leadership to the men and women at every Bendix location.”

Four Bendix locations across North America participated in the Get Involved! program in 2016, completing 16 projects in education, health protection, and social infrastructure. Bendix projects included support for Connecting for Kids – Beyond the Bench, in Elyria, OH, where Bendix is headquartered. The program helps elementary and middle school students raise awareness of bullying and provides tools for children to be supportive of others.

Among the other Get Involved! projects were funding to help the Huntington County Fire Department in Huntington, IN, and the Center for Courageous Kids in Scottsville, KY. The center provides support programs for families with children who have life-threatening diseases.

In addition to Get Involved!, volunteering efforts saw significant growth in 2016 through Bendix’s corporate volunteering program. The program launched in 2015, mainly at the Elyria headquarters, and was deployed across all Bendix locations in 2016. From 2015-2016, Bendix increased its number of corporate-sponsored events during work time by 85%, jumping from 13-24. Bendix nearly doubled its number of volunteers and more than doubled its total volunteer hours, reaching 4,390 hours for the year.

“Volunteerism at the local level means so much to the employees at each Bendix location,” Gutierrez says. “In addition to the good this work brings to our communities, we truly believe that providing employee engagement and community outreach opportunities locally can boost intangibles – such as morale, productivity, and loyalty – and help develop deeper bonds among fellow Bendix team members.”

To increase its impact on the community and align with its corporate mission and vision, Bendix focused its Local Care efforts in three main areas: education, health protection, and social infrastructure. Bendix supported programs throughout the year in those areas.

One project took place last June, when nearly 500 employees gathered at Bendix’s Elyria headquarters for the opportunity to help change the lives of four Ohio families. Bendix partnered with Habitat for Humanity of Lorain County, Habitat for Humanity of Medina County, and Help Build Hope to frame four homes for families in need. Bendix also made financial contributions of $1,500 per home, to fund new roofs for each.

Along with local giving, Bendix contributed to two Knorr-Bremse Global Care projects in 2016. In collaboration with Casas por Cristo, Bendix volunteers began constructing four safe and secure homes in Acuña, where the company has operated a manufacturing facility since 1988. The effort is part of a project involving complete construction of houses for local families who lost their homes during a devastating tornado on May 25, 2015. Helping to construct four of the 20 homes under the project, Bendix employees will complete their final build next month.

With help from Instituto de Capacitación para el Trabajo del Estado de Coahuila (ICATEC), Bendix also instituted a plan to help young people at risk in Acuña, a city of 181,000 people. Bendix developed 12 courses on light manufacturing techniques – delivered during a four-week curriculum – and began teaching them to men and women ages 18-25 not currently employed or enrolled in school. The program – a one-year pilot effort – kicked off in September 2016 and, by the close of the first year of operation, the program will count over 240 graduates.

The unique 180-hour technical course, in which 12 groups of 20 students studied in one- or two-month-long sessions, takes place at the Bendix Acuña campus. The program’s goal was twofold: assist in the personal development of each student, and help them become job-ready for the manufacturing workforce. The program is scheduled for completion in 2017, after which Bendix will evaluate the impact and effectiveness for potential continuation.

On the horizon for 2017, Global Care will support the construction of an industrial lab to enhance the facilities, infrastructure, and curriculum of a local technical vocational school, Colegio de Estudios Científicos y Tecnológicos del Estado de Campeche (CECyTEC).

Knorr-Bremse Global Care was formed as a nonprofit in January 2005 to provide rapid, targeted support in the wake of the Southeast Asia tsunami disaster of December 26, 2004. Since its inception, Global Care has implemented more than 200 projects in 52 countries with a total funding of over EUR 15 million.

“We are grateful to be a part of the Knorr-Bremse Group and Knorr-Bremse Global Care,” Gutierrez says. “Taking part in Global Care projects is among the most rewarding things we can do as Bendix employees.”